Prune Nourry started working on ‘Terracotta Daughters’ in 2012, the statues she created in conjunction with craftspeople have become both installations and performance pieces that stand for great inequalities in China.

[dropcap style=”font-size:100px;color:#992211;”]P[/dropcap]roto-‘Terracotta Daughter’ Qiu Jin (1875 – July 15, 1907) was a Chinese revolutionary, feminist, and writer, she was beheaded at 31 for defying the Qing dynasty following a failed uprising against the authorities. Qiu Jin is praised as a heroine in China statues and museums celebrate her achievements. An educated and courageous woman who simply wanted a better lot for her sex, who in many cases were still having their feet bound (a crippling alteration made for aesthetic purposes) and whose rights lagged far behind those of men. 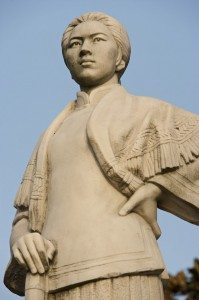 Statue of Qiu Jin at her tomb

“With all my heart I beseech and

compatriots to assume their responsibility

This legacy is worth remembering in the centenary celebrations here in the UK regarding women’s suffrage and voting rights. If we make woman like this famous then attitudes and political actions will improve across the globe. Sometimes these values are forgotten or worse buried under outdated, wrongheaded views. 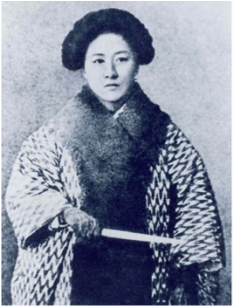 Prune Nourry is the artist behind the project ‘Terracotta Daughters’ which places the gender imbalance and contemporary sexism in China at centre stage, giving the problem an extra layer leading us way back in Chinese history. The lack of female representation is seemingly redressed somewhat by the stone girls,

“The last part of the triptych, Terracotta Daughters questions gender selection in China. Taking her inspiration from the famous Terracotta Army of Xi’an, Prune Nourry made 8 hybrid sculptures, combining the style of the Terracotta Soldiers and the portraits of 8 young Chinese girls. With the help of artisan-copyists from Xi’an, she then created an army of 108 unique combinations from the eight original molds. Following a World Tour (Shanghai, Paris, Zurich, New York and Mexico City), the Army was buried in a secret location in China, in a performance entitled “Earth Ceremony” held in October 2015. The participants became witnesses to the birth of this “contemporary archeological site”. The excavation of the Army will take place in 2030, when, according to Chinese demographers, the male/female imbalance will have reached its peak,” Prune Nourry website

The Problem in Full

The Chinese Academy of Social Sciences has confirmed that by 2020 millions of men could find themselves without spouses because woman aren’t being born at a normal rate. There is self destructive aspect of this problem which is enabled by technology and greedy immoral doctors,

“It cites sex-specific abortions as a major factor, due to China’s traditional bias towards male children. The academy says gender selection abortions are “extremely common”…This is especially true in rural areas, and ultra-sound scans, first introduced in the late 1980s, have increased the practice,” BBC News

This practice is not legal but the proliferation of the practice and the deeply embedded attitudes are hard to chip away at when it comes to sex and gender (the Chinese are not alone in that respect as many recent news stories attest to) Nourry does hammer at this problem with ‘Terracotta Daughters’, wearing away at attitudes while the statues linger in the unconscious.

The fact that these pleasing full bodied portraits are buried and will be excavated when the imbalence hits a peak in 2030 adds to the collective cathartic experience the artist is going for and gives the peice the sober gravitas of a monument, a monument to a problem the artist clearly feels will still be in full swing years from now! One can imagine she has gained friends and made enemies in the process, mining this sensitive seam of the culture. 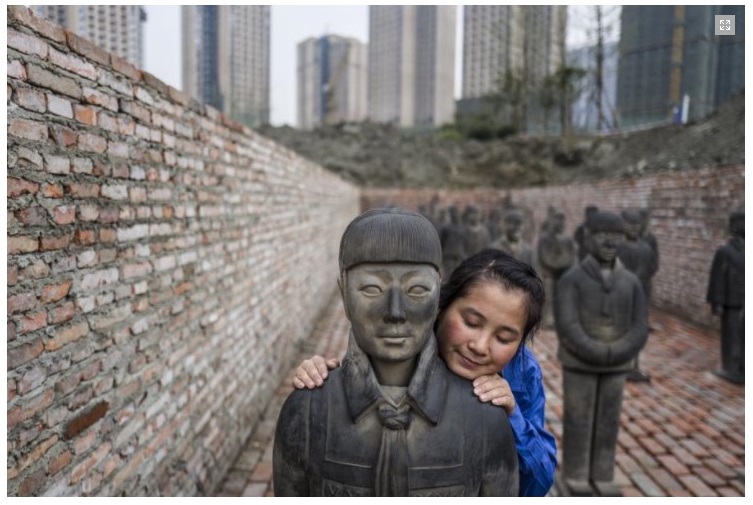 There is preference for male babies in China which has been reported here in the west for many years, its the same old story; family lineage, money, work and prestige. From an analytical distance its easy to see the practice for what it is, a self defeating anachronism with dire consequences,

“China’s preference for sons stretches back for centuries. Infanticide, the abandonment of girl babies and favourable treatment of boys in terms of food and health has long produced a surplus of men. In the past two decades, the gap at birth has soared: the advent of ultrasound scans has allowed people to abort female foetuses, even though sex-selective abortion is illegal,” Tania Branigan,’China’s great gender crisis’ Guardian 2011.

The appetite for women though does not abate just because their ranks are thinned out,

“The growing  imbalance means that forced prostitution and human trafficking has become ‘rampant’ in some parts of the country, according to the researchers,” BBC News

The fact that prostitution and human trafficking has soared as a result is a depressing parallel, but it does show how deeply irrational any widespread acceptance of ‘male preference’ is.

Insult is added to injury and the lack of agency is clear! We need more Qui Jins and more Prune Nourrys, to redress this balance effectively as well of course, as the support of the many Chinese men who cherish their daughters as much as their sons. 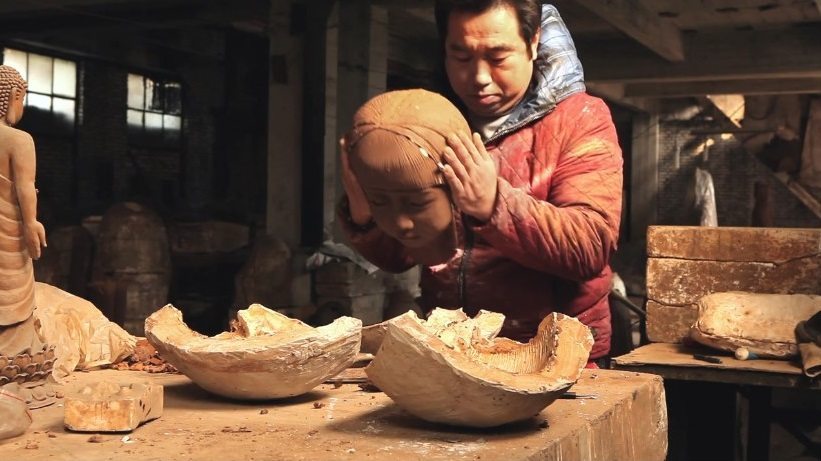 Craftsmen working with the artist to create the sculptures (Vimeo still)

Previous Story:
Damned if we go to a(nother) Punk show