Ships at a distance have every man’s wish on board

Wandering into Ceri Hand Gallery feels much like anticipating a childhood fancy dress party in the ubiquitous village hall : the colourful party hats and mandatory bouncy castle harmoniously jarring with the cavernous austerity of the wooden beamed ceiling.

It is this sense of paradoxical delight which pervades the playful tones of Charlie Billingham’s latest installation of paintings, marching uniformly across the red grid of the gallery walls. An emphasis upon the gesture of the brushstrokes belies the minimalist influence of the amoebalike shapes, imbuing them with an almost sociable aura.

painting and frame is

one that is unravelled

The observed abstracts become the human presence of observers to the silhouettes of three boat sculptures tilting across a watercolour tapestry of sea.

‘Tilting’, rather than ‘Sailing’ is the operative word, for the sculptures also bear the language of furniture design, and are as much static signposts – directing the eye towards the void of the far gallery wall – as mobile entities with the promise of narrative disclosure of a sea voyage.

Indeed, the distinction between painting and frame is one that is unravelled rather than resolved since, just as the woven surface of the painterly sea  – influenced by a holiday on a Greek Island– accommodates the boat-like forms, the sleek wood is part of a framework for pairs of paintings that harbour as much potential energy as their carriers; slipping rather than sitting within their supports.

A bird can be perceived amidst the waves, almost announcing some significancee. Then again, like the abstract shapes, it may simply exist for its own sake. In Billingham’s world perhaps birds can swim, or are we in fact observing the sky? It does not really seem to matter. 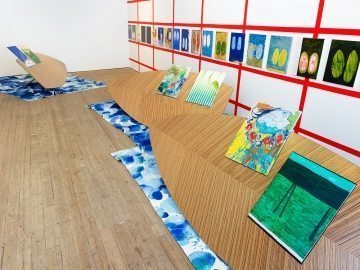 The red modernist grid inscribing the walls does little to instil the order of its historical counterparts; the small-scale canvasses break its chequerboard with their march of carnivalesque drips and daubs. A nod to Erik Bulatoy’s confrontation of the ideologically charged red grid (emblematic of the repressive Stalinist regime) is evident.

In ‘Entrance’ and ‘Skier’ Bulotov subverts both the two dimensionality of the grid and the definition of mimetic representation, drawing the viewer’s gaze into trespassing the bounds of its compromising lattice. However, where in ‘Skier’ the viewer experiences the real only within the boundaries of imprisonment, here the glistening tactility of the paintwork overrides the suggested compound, tempting a sensual interaction – the beckoning of ice cream to a child to stem its melting flow.

Where Western modernism set its coordinates towards the cessation of communication and the autonomy of art, here dialogue flows over (what now seems) a playful battleship board; the colours and frantic brushstrokes not only darting between wall pieces but spilling over, in near repetition, into the boat-breaching canvasses.

The tensions between land and water, interior and exterior, human and object, active and passive, depiction and abstraction are acted out amidst the chaotically linear space.

The theatre here is not one of dramatic climaxes. The repetition is improvised so that it never reaches direct quotation. This results in an accumulation of slippages that infer a very human pleasure in the potential of materials, rather than an alignment with any aesthetic dogma. 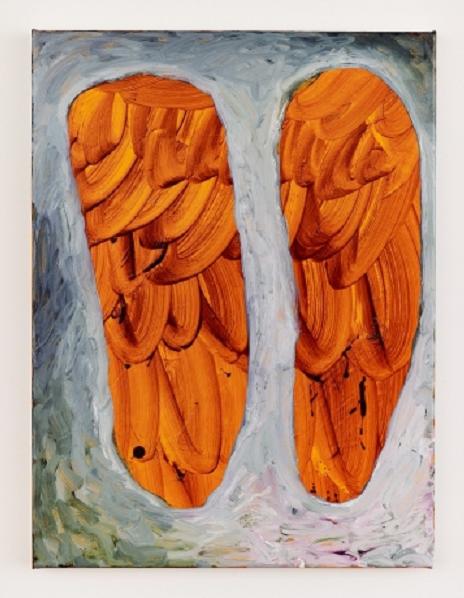 Indeed, this ultimate lack of rationality amidst the attempted impersonality of Minimalism means that, although Billingham quotes Guston and Matisse as the protagonists of this drama, it is Eva Hesse’s unruly sense of space that is brought to mind. As in Billingham’s case, energy is instilled into a static plane through a lively use of colour and the dramatic tilt to many of her paintings and drawings. In this way accumulation and repetition become a vehicle for introspection, rather than a Minimalist banishment of emotion.

My initial realisation that the infamous Regency ‘bottoms’ of Billingham’s past ouvre had vanished is dispelled – these abstractions have a very visceral presence. The story of the Greek Islands somehow become more relevant and, the paintings increase their command to be licked. As with the wigs, swags and bums, in Tender – though the influence of past masters is a haunting presence – the past stays past as the drips and spills instil a historical distancing and fragmenting of meaning in preference for the decorous.

We could be as much in an upturned living room as adrift at sea.

Finally reaching the expanse of white at the far end of the installation does not engender the anticipated sense of absence. Looking back, the reverse of the paintings infiltrating the surface of the sculptures are revealed, and the craftsmanship of the metal fastenings on the rudders of the boats.

The blank space is therefore filled with the language of construction and material potential. Not one to satisfy, Billingham’s last word seems to be that, where frames are built, they can also be joyfully broken only to be remade and transgressed anew.