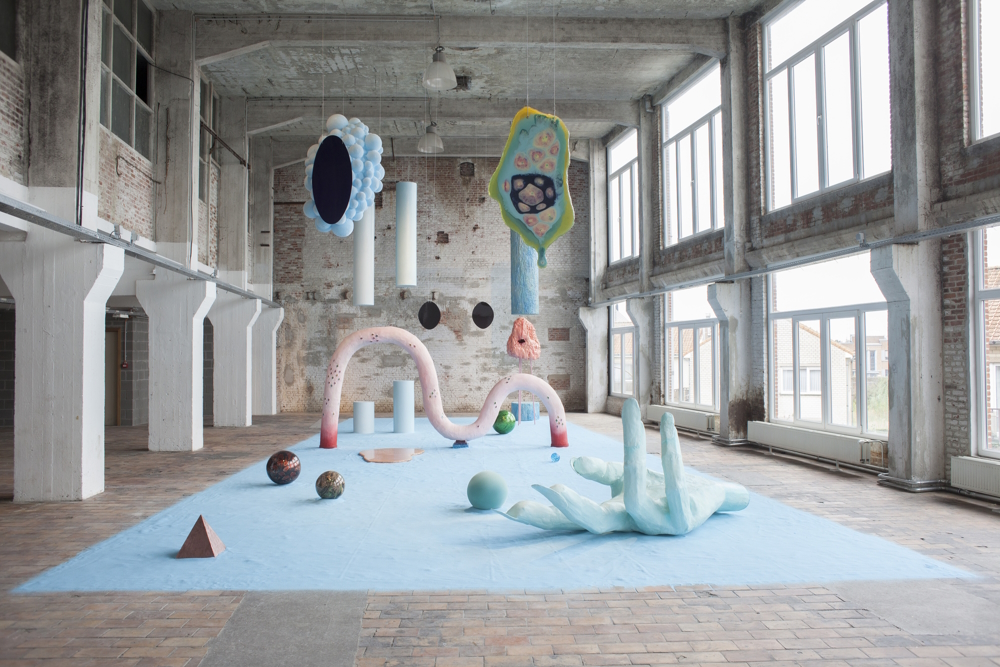 Turner Prize winning Tai Shani’s 2022 collaboration was a precursor to Art Night’s transition to a national, biennial contemporary art festival, with the first new festival planned for 2023 (artnight.org.uk). Following on from last week, in this second part Shani closes in on the aims of her nascent work and how her relationship to the world around her.

How do you define your work? Is it a theatre performance? Is it a tableau? Is it a happening in a Beuysian Sense?

Well, the one I was just  My bodily remains, your bodily remains, and all the bodily remains that ever were, and ever will be. (Down, skin, pelt, vellum, alert tangled roots, subcutaneous flesh, subterranean blind life) about I think of as a play. It’s a very, very loose definition of what a play would be but it is a play. It’s on a stage, it has a beginning and an end. It’s got lighting and actors, it’s a play. In the past, I used to do a lot of adaptations and DC: Semiramis is an adaptation of Christine de Pizan’s The Book of the City of Ladies (1405).  I was into how if you said, ‘Oh, this is  Antigone’, in relation to a play, or a piece you bring in this affective geology, a sediment with it that in just one word becomes relational to everything that happens inside that. When I’ve used that technique before, for instance creating an adaptation of a Fassbinder film,it would bring this affective territory with it. Similarly with a play if you say, well, it’s a chamber play. In your mind, you have a conception of what that setting means and it’s ground paint that will quietly remains there.

But my practice in general really depends; I make sculpture, I do paintings, I write, I do performances. I change what I do quite often, I make films, I do photography, it just depends on what I’m working with. I am not medium led if that makes sense.

I started out predominantly doing  performance, then I started building more elaborate sets for the performances. And then those sets became objects, and then they became sculptures. At the moment, I’m interested in painting quite a lot. I’m enjoying it. just the specificities of the conditions of my life has meant that having something very focal f, for instance painting where you are on your own and do that, has been beneficial for me. It’s been good for my mental health, and I’ve enjoyed that Although it’s also difficult painting. It’s a bit like writing in many ways.

I hate the process of it (writing). I’ve written a handful of good sentences in my life and I wish those should be enough. when I’ve touched upon something in a sentence I feel it’s hard for me to better it. For me, not someone else. I find writing difficult but sometimes in an amazing way like when I was writing the DC Semiramis texts, there were things about my own experiences that I managed to put into language that were revelatory to me and also cathartic. They allowed me to move on from certain things.

That said obviously I’m not gonna start saying I’m good at writing about trauma but when it works you’re able to talk about personal things in a resonant way that remains deeply personal but simultaneously is very open for other people to inhabit. I think that’s when writing about trauma is “successful” – when something becomes a space as opposed to solely a narrative. In that way it’s then got a function to it as well and not just cathartic or confessional. There is a third thing that happens, which is an opening for the reader or viewer to contemplate their own position in relation to that.

You changed the title ‘Dark Continent’ to DC. Why was that?

Yes I’ve changed the name of the project from dark continent to DC. I’ve tried wherever I can to get that changed but it’s still there as artefacts of the old name, in various websites and things I can’t change basically, or haven’t been able to change.

When I first heard the term I heard it via Freud referring to a girl’s sexuality as a dark continent. So that was very evocative as a term, then I found out about the use of that term in relation to colonialism. I felt that it was profoundly inappropriate to use it. So I tried to get it changed. I’ve said very publicly that I didn’t feel it was right. I’m happy to reiterate this point because the sad thing about this moment that we’re in socially is that people are quick to reference cancel culture this or that but ultimately  there’s no one who is interested in progressing towards justice that doesn’t want people to change their minds about things and doesn’t welcome that. So to me, saying, I was ignorant about what that term was used for more widely and when I found out, it didn’t feel right for me to use that anymore, and I changed it. That’s it really.

I thought you were making a statement about the connection between the feminism and colonialism?

Also that difference has become more entrenched because if you think about, Girl boss feminism now and how that operates as a form of contemporary feminism. It’s one I don’t relate to on any level. I it’s important to constantly interrogate what happens to language in this way.

What is your relationship to language? Is it a tool? An encountered being?

I want to communicate, and communication happens in different ways, in different registers. And also, the way we communicate or the tools of communication are different at different times, but I’m wanting to commune with other people and through communication is how you do that. I’m interested in the boundaries, about experiences that sit on the edge of effability, our ability to put them into words, right? I love this academic called Amy Hollywood, and she has this beautiful essay called The Unspeakability of Trauma, The Unspeakability of Joy (2012). Where she talks about these experiences of elation or of fears of, self loathing pain, that are difficult to express, when people say, I have no words, in grief, I have no words, no words to describe.

I’ve often tried to describe those things, those would be my points of Mesmer, as someone trying to articulate something into language, those points that are very elusive to definition, to communicate,  or to given its fullness. It’s hard to describe grief to someone else in a way that it can be evoked in someone else.  I’d say, to the degree that you feel it. That is one of the beauties of being someone who makes things, whether it’s books or films you are trying to communicate a reality, a position, an experience to someone else that makes them participate. So I’ve been drawn to those experiences that are very hard to grasp.

As opposed to the past I’ve slightly changed my orientation towards what I’m interested in because often those experiences were about pain or sadness. Extreme experiences but now I’m interested in finding ways of putting that at the service of something more tangible. The thing is that being politically engaged is not necessarily interesting to people in part because the heroic narrative that a lot of people want to buy into doesn’t exist. In all things you’re a tiny, tiny contributor to the building of something that is completely collaborative. You want to enjoy that as well but it’s not for you, or not just for you, it’s a play of relevance that goes both ways. Because you can also diminish or dismiss actions very easily and be oh, it’s just this or it’s just a poem or whatever but nothing is just anything. Any moment or event or artwork is a part of the infinite unbroken cycle of collaboration that spans millennia in both directions. Nothing is insignificant and nothing is super significant either I guess.

Where does the hero, and by extension the general trend for hagiography, sit in this model?

There are often characters for whom certain moments coalesce. They are politicians, sometimes even martyrs through circumstance. There are definitely moments where a narrative coalesces around a specific person. But often in a very enmeshed with other people and other actions. Even if they  emerge they’re often dragging other things, people, groups, histories  with them, these histories. So the heroic narrative is terrible and it always has been, and needs to be forgotten entirely .. ’. Perhaps some might say  ‘oh, but what about the heroine?’ They’re missing the whole point. The whole point is that these structures of hierarchy are of significance because they propose one person over another so they don’t lead to anywhere good. It’s a toxic power.

I mean things are bleak now. So now more than ever we need to focus on connecting with others and finding ways forward. So now, poetry is important in times like this, because they give you a place to dream about a future even if you can’t see it.

Article and analysis in the latest issue of Trebuchet

My bodily remains, your bodily remains, and all the bodily remains that ever were, and ever will be. (Down, skin, pelt, vellum, alert tangled roots, subcutaneous flesh, subterranean blind life), will be performed by Tai Shani at Artnight 2023, Dundee on the 24th June 2023. Further details artnight.org.uk

All images courtesy of Tai Shani

Next Story:
Inside Out, the Pop Power of Siena Barnes?