Medical scientists have developed a laser scalpel capable of working on a cell-by-cell basis. It's already being referred to as a 'surgical light-saber' That's nice, of course. Whilst the current model might be ideal for 'repairing the vocal cords or removing small tumors', it shouldn't be long before there's a version that can slice off and entire hand (for example). Question is, how long until the beefed-up street version ends up slashing your tyres, or making a proper mess of all the conduit tubing on your Death Star?

Whether surgeons slice with a traditional scalpel or cut away with a surgical laser, most medical operations end up removing some healthy tissue, along with the bad. This means that for delicate areas like the brain, throat, and digestive tract, physicians and patients have to balance the benefits of treatment against possible collateral damage.

Researchers from the University of Texas at Austin has developed a small, flexible endoscopic medical device fitted with a femtosecond laser "scalpel" that can remove diseased or damaged tissue while leaving healthy cells untouched.

The device, which was engineered with off-the-shelf parts, includes a laser capable of generating pulses of light a mere 200 quadrillionths of a second in duration. These bursts are powerful, but are so fleeting that they spare surrounding tissue. Using an imaging technique known as "two-photon fluorescence," this specialized microscope relies on infrared light that penetrates up to one millimeter into living tissue, which allows surgeons to target individual cells or even smaller parts such as cell nuclei. 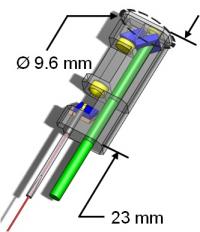 IMAGE: The packaged endoscope is overlaid with the optical system. The circumference is 9.6 millimeters and the length is 23 millimeters.

The entire endoscope probe package, which is thinner than a pencil and less than an inch long (9.6 millimeters in circumference and 23 millimeters long), can fit into large endoscopes, such as those used for colonoscopies.

Tabletop femtosecond lasers are already in use for eye surgery, but developer Adela Ben-Yakar sees many more applications inside the body. These include repairing the vocal cords or removing small tumors in the spinal cord or other tissues.