Mary George's group exhibition in a fully functioning gym juxtaposes the static with the kinetic, the delicate with the strong, the physically aspirational with the spiritually contemplative.

At 8pm on Rivington st, next to the the popular nightclub venue Cargo, the internally adjusted Body Studio boxing gym opens its doors. Down the road at Redchurch Street, First Thursdays is winding up, and hipsters are scrabbling around at the bottom of ice buckets for the last free Budweiser or begrudgingly squatting on the road with cans from the off-license.

The art here must declare itself, compete with the bright, brash instruments of human fitness.

Back in the gym, the champagne is just beginning to flow from a bar sandwiched between an array of dumbbells and punching bags. The genteel beside the macho. Variations on the theme of refinement.

Curators always seem to be searching for new and outlandish 'spaces' to exhibit in. Banks, churchs, offices, as many warehouses as you could shake a stick at, we've all gone and listened to the artist/curator harp on about 'reacting to the space' or 'feeling the environment'. A boxing gym, however, I must admit is a new one. In July 2007 Humuberto Velez collaborated with 3 Southwark boxing gyms to bring 'The Fight' to Tate Modern, placing the physical in the white cube context, the performance drawing the label of 'art' from its environment. When this is reversed, and the art is set against a genuine, aesthetically complex background of boxing rings, changing rooms and weights, the effect is wholly different. The art here must declare itself, compete with the bright, brash instruments of human fitness.

To be honest I refuse to ever, ever enter gyms as I find the idea of regimented exercise, or any exercise at all, rather terrifying, and so was expecting a Raging Bull/The Wrestler kind of gritty, white/grey serious gym with evidence of manliness spiritually emanating  from the walls. Instead it was all bright pinks and blues and shiny rubber. Frankly too happy looking a place considering it was somewhere people come to effectively tire themselves out for no good reason that I can see (I am convinced those 'happy endorphins' thingies are a rotten lie). Anyway, the effect was that it was often the art, rather than the surroundings, that was subtle, unassuming, and undemanding of space. Surprisingly, in most cases this did not lead to it being overlooked. We knew what we were here for, to see art, not to work out. However the DJ set up in front of the boxing ring did make me hope for some kind of contemporary boxing dance performance, but perhaps that would have been going too far.

The genteel beside the macho. Variations on the theme of refinement.

As for the artists, George has selected various young practitioners, mostly current Goldsmith's or Sir John Cass students. While a few pieces failed to truly stand out and hold their own in such a challenging space, a few artists achieved recognition.

Chief among them was Sarah Rodrigues, whose mixed media instillations had a delicacy and process that impressed. 'Formalist Device', a metal structure resembling abstract, weighted scales in motion, with various materials (water, powder, paper) held up in stillness, representing the potential to tip. As if the artistic nature of the materials, which should have given them weight, held them at separate heights; outside of gravity, and thus they stood as they should in relation to each other. 'Fallen Plinths', four oblong posts of various materials laid adjacent on the ground, their ends reduced to dust, suggested the elemental nature of things. As Roger Hiorns showed with 'Atomised Jet Engine'; all things, no matter how monumental or beautiful, can be reduced to particles of unrecognisable matter. In the context of a gym devoted to the shaping of physical, outer appearance, this elemental work proved especially poignant. 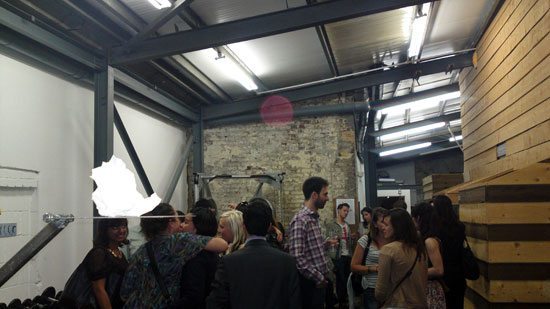 Ronin Cho's 'Homage to Old Rug Makers', I realised was making me anxious. Laid in the centre of the floor, he had constructed a mat out of tiny, coloured, crushable lightbulbs. With a background in motion graphics, the artist expressed a desire to create something more tangible, more lasting than digital creations. Proof, I suppose, that the digital revolution has not truly transformed the art world just yet, the 'object' still reigns supreme. This is not a criticism, as Cho's work is testament to how the digital can influence art to produce new kinds of 'objects'- an expression of the digital via the physical.

Not all of the works held such poignancy in the space. Sooim Jeong's pink and purple pastel painting of grinning animals went nicely with the bright pink exercise balls, but felt more like something that belonged in a who-can-paint-the-most-sickeningly-sweet-painting competition. Hey maybe that was ironically intentional or 'Gloriously kitsch', as my friend put it. I much preferred David George's austere digital prints depicting industrial monstrosities in barren wastelands (shades of Ginsberg's Moloch), but maybe gyms just put me in a sombre mood.

We left to catch our last tubes, pitying the curator and artists, who have to remove the works each night, and wait for the last sweaty body to leave in the evening before once again claiming the space. A curious idea indeed, but one that somehow works. One night this week, I advise you to go to the gym.