The largest disturbances to the Earth’s geomagnetic environment occur when it is buffeted by solar material hurled in our direction by explosive changes in the Sun’s atmosphere. These Coronal Mass Ejections or CMEs contain approximately a billion tons of ionized gas or plasma and can have a dramatic and damaging impact on everything from satellites to power grids. Now a team of scientists have used two spacecraft to study these events in unprecedented detail. Graduate student Anthony Williams of the University of Leicester will present their results on Tuesday 19 April at the Royal Astronomical Society’s National Astronomy Meeting in Llandudno, Wales. 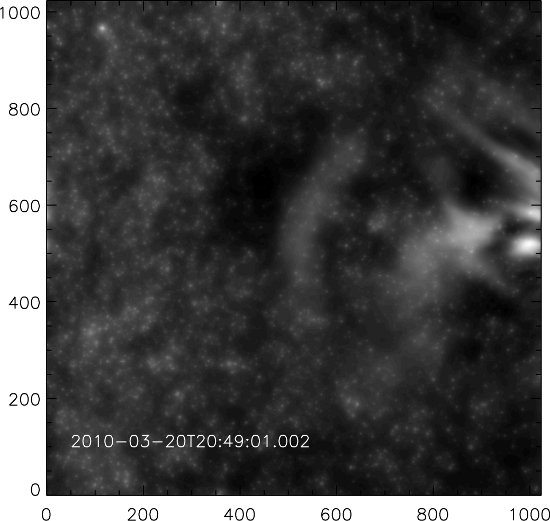 Mr. Williams and his team used the Heliospheric Imagers (HI) on the Solar TErrestrial RElations Observatory (STEREO) spacecraft to examine the internal structure of an Earth-impacting CME — seen as sunlight scattered from high density blobs of plasma — as it travels outwards from the Sun. They compared this with the internal structure measured in situ by the Advanced Composition Explorer (ACE) spacecraft as the CME engulfed the spacecraft and impacted the Earth. This meant that the scientists have for the first time been able to compare the evolution of the CME structure as it races towards the Earth and the internal structure observed as it arrives.

The CME studied was ejected from the Sun on 19 March 2010, when the STEREO A spacecraft was in a position to watch from the side as the CME hurtled outwards towards the Earth. The structure of the CME was examined in HI images spanning a distance of approximately 48 million km at different distances between the Sun and the Earth. Analyzing the images indicated that its speed was close to 350 km per second, which allowed its time of impact on the Earth to be predicted some 3 days after the initial ejection.

The results indicate that the CME structure evolves considerably on its outward journey, and that the internal structure can be difficult to predict from the images. And there is another key facet to this work — imaging CMEs with spacecraft like STEREO is an extremely effective means of forecasting their impact on Earth and the large scale disruption that can sometimes result.