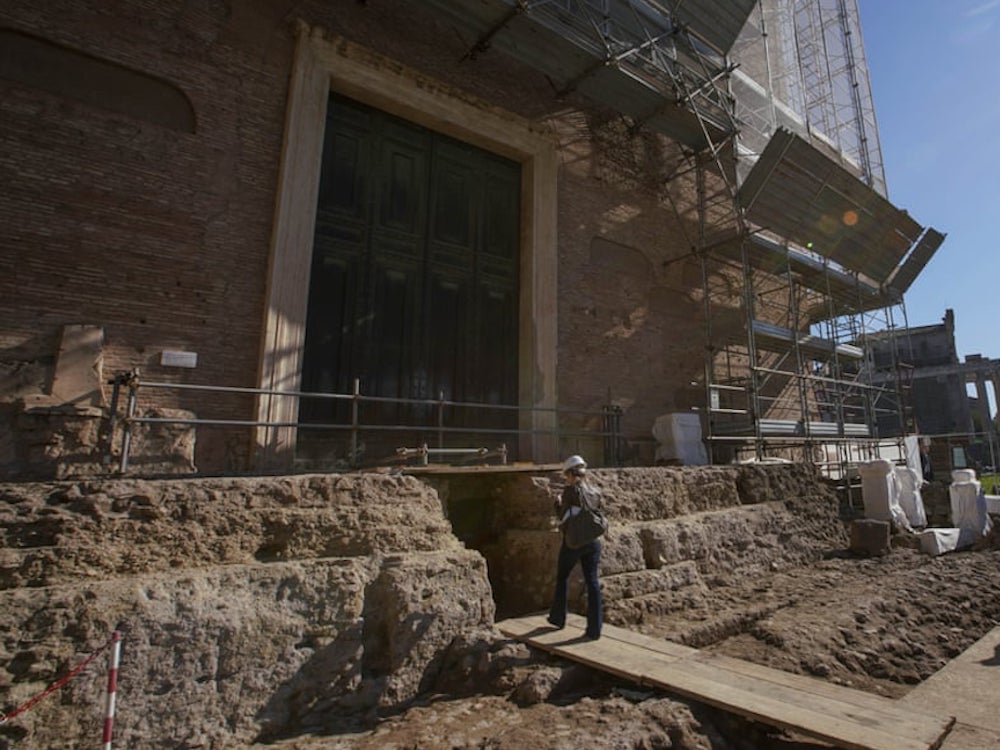 [dropcap style=”font-size:100px;color:#992211;”]A[/dropcap] newly discovered ancient shrine believed to have been dedicated to the cult of Romulus, the legendary founder and first king of Rome, has been unveiled.

The monument was discovered by archaeologists in a chamber beneath the Roman Forum, the political heart of the Roman empire, and includes a 2,600-year-old sarcophagus and a circular stone structure that is believed to have been an altar.

The discovery was made close to the Curia-Comitium complex, where senators would meet to vote, as part of an excavation project that began last year.

In Roman mythology, Romulus founded the city after killing his twin brother, Remus. Legend also has it that he was murdered by angry senators and his body dismembered.

The existence of Romulus is disputed by historians. Alfonsina Russo, the director of the Colosseum Archaeological Park, which manages the Roman Forum, said on Friday that the tomb was not his final resting place. No bones were found inside the sarcophagus.

“It is not the tomb of Romulus but a place of memory where the cult of Romulus was celebrated, a cenotaph,” Russo said. “It is also not his tomb, as some sources say that Romulus was killed and cut into pieces, while others say he was taken up to heaven as god Quirinus.” However, Russo believes there is some truth in the legend: “All legends and myths have a kernel of truth and I am convinced there was a founding hero.”

Romulus and Remus were said to have been the sons of Rhea Silvia, a vestal virgin and daughter of the former king Numitor, and the war god, Mars. As babies, they were thrown into the River Tiber in a cradle by their uncle, before being saved by a she-wolf. The symbol of Rome features a she-wolf suckling Romulus and Remus.

Romulus is said to have killed Remus on what became the Palatine Hill after quarrelling over where to build Rome. It is said he went on to found the Roman senate and rule as king for almost 40 years, before vanishing one day when visiting his troops.

The shrine will be open to visitors in about two years.

Next Story:
Original Cinema Posters Worth Over £200,000 to Be Auctioned