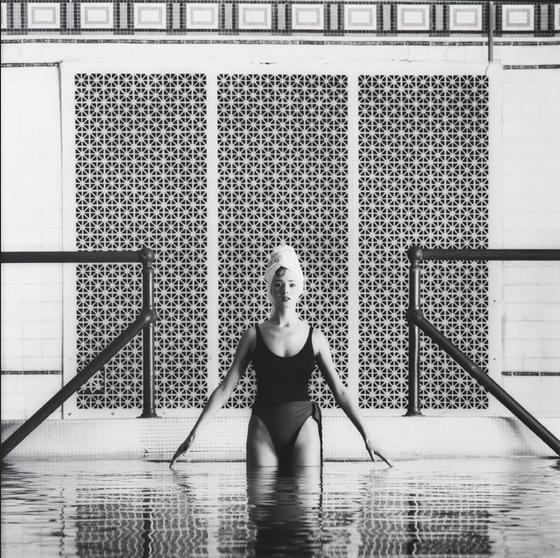 His delicate gaze saw with clarity what others did not

It is the former adjectives, however, which one discovers amidst this rare collection, ranging from iconic portraits of fashion heavyweights such a Yves Saint Laurent and Grace Jones to intimate shots of his long-term lover David Croland and Mapplethorpe’s handcrafted jewellery.

It is not so much fashion– in the sense of the shifting trends and fads of the market which is the subject of the exhibition – as the desirous pursuit of the beauty and seemingly effortlessly complementary arrangement associated with successful design, that was the core of Mapplethorpe’s interaction with the world. For him the body, a piece of cloth, a lover; were woven from the same delicate, enticing sheet.

with their backs to the

camera, so that the

entirely on the materials,

cuts and forms of their

It is the pursuit of the alignment of this love – as an act of self-definition – that this show captures; curated by Croland (Mapplethorpe’s first official boyfriend) who embodies the conflation of art, desire and high fashion in his experience as a model, and role as the man who first introduced Mapplethorpe to the fashion crowd and scene.

The unique gaze of the artist beckons us from within each of the frames. It is the gaze of the observant, beautiful boy whom Croland first met in his tiny room at the Chelsea Hotel, where Mapplethorpe was staying with the other love of his life: Patti Smith.

Although taken decades before the rise of fashion photography (as we now conceive of it) the works are markedly modern, embodying what Charles Baudelaire claimed in The Painter of Modern Life: that fashion was itself a crucial part of modernity, which he defined as: “the transient, the fleeting, the contingent; it is one half of art, the other being the eternal and the immovable.”

Mapplethorpe himself was, in Croland’s words: ‘always in fashion. Classic and timeless. Then as now’ and it is in fact echoes of Smith’s love letter to the photographer: ‘The Coral Sea’ which haunts the mind whilst wandering amidst the works on display– just as the subject of her lyrical prose voyages out into the world in an innocent, ill-starred pursuit of capturing ‘the spine of a mountain as the light played on it’.

He was born with a gift for placement, which he executed with the brash assurance of a young master. Adoring the prospect of a relationship not anticipated. The curve of a stem against the throat of a fallen goddess. A twist of net in an an exposed hall.1

Central to the exhibition are photographs commissioned for publications such as Italian Vogue, French Vogue and LA Style. These poised compositions align seemingly disingenuous geometric elements with the human form, blurring the boundaries between sculpture, fashion photography and portraiture. What should be dynamic postures are glazed with a marblelike quality and, despite the angular nature of the juxtapositions with architectural setting, the camera’s eye melds the image into a fluid conversation of body and line. Mouths gape, become breast’s concave reflecting elbow’s crease, supporting ball– an inversion of the body and head’s alignment upon the reclining board.

In others he photographed his better-known muses with their backs to the camera, so that the viewer’s attention is focused entirely on the materials, cuts and forms of their dresses: zebra striped fabric, luxurious fur or crushed silk.
For Mapplethorpe the body was sculpture, was material, was light itself – the slightly agape ‘Bottega Venetta’ purse positioned between the model shots could almost be breathing an invitation into its velvety depths.

The play of light upon the marble stairs and upon the trousers of an old gentleman descending. He became increasingly aware of light….

Light and its transformative power is a reoccurring theme throughout the work. Mapplethorpe’s search for the ‘perfect image’ is especially foregrounded in his fetishist depictions of models and accessories such as ‘Ken Moody’, ‘Melody/Shoe’ and ‘Hands’. 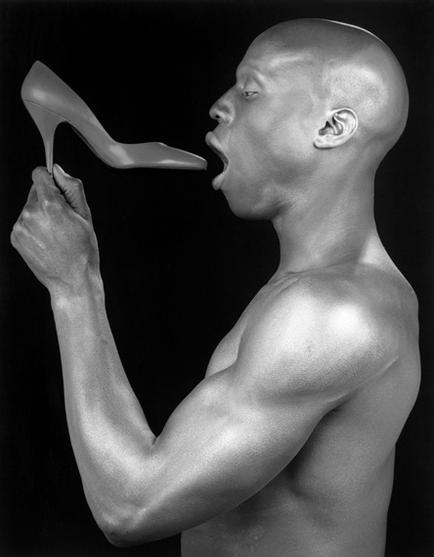 The triangular assemblages evoke the still life of Irving Penn but, imbued with an even more concentrated intensity of materiality; conveyed in the elegant mirroring of the surface and illumination across skin and leather. The boundaries between object and body become increasingly blurred as hands extending recall Mapplethorpe’s flower still lifes; which themselves have a bodily quality.

A glove is being eased over the poised fingers, the material conspicuous in its absence – fashion is most intensely depicted where it is not. The formal alignments come full circle, material is everything and nothing.

‘what cord would bind him? A waft of music? A ribbon raving? How should he be decorated?’ 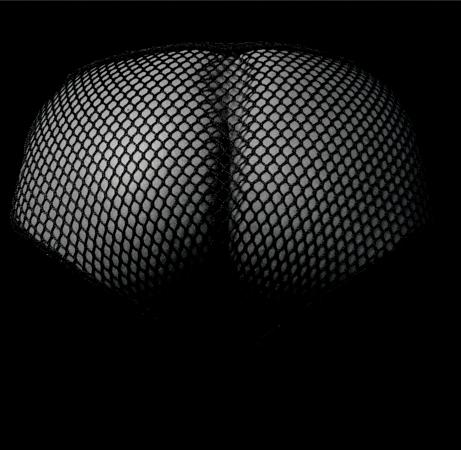 Indeed, the personal colouring to the gaze, which captures this arousal, is foregrounded by the presence of the intimate Polaroids of Croland, gagged before a grey background.  The tension and push-pull of desire drives Mapplethorpe in life as in art.

within the same gaze

of the subjects of Mapplethorpe’s

Therefore, although these Polaroids, as with the informal depictions of Yves Saint Laurent and Marianne Faithful, lack the tonal perfection of the studio work, they hold the same mood of being drawn to the promise of beauty.

‘He a freeman to be imprisoned in time by the whims of marble gods, themselves streaked with light. These reflections shot through the mind of one unaccustomed to reflection’

As we gaze into the ‘Mirror’ piece, we too become bound with a fishnet-like gauze, our reflected bodies fusing with the mesh. We too are captured within the same gaze of the subjects of Mapplethorpe’s photographs. Our surface becomes resurfaced – everything is projection, everything is adornment, a web to catch form as an embodiment of itself – as realised by the eye of the artist.

‘It was not the warrior , nor the war , but the certain rituals and relics of war that he adored. The scarf of the samurai, the bowl of sake spilled in the divine wind. And as he examined the cut and tone of his tokens he achieved the demeanour of one who belonged to no one, nothing save his dream. And to this he was a slave.’

There is a childlike poignancy to the collection of jewellery on display. Little personal trinkets of shells, a rabbit’s foot and a tiny clawlike hand are combined with bone and glass beads – talismans of personal conquests in an ongoing forage for meaning on the voyage through life.

The jewellery is as cumulative as the fashion shots are minimalist and yet, the same obsession with arrangement and combination can be seen in each. The energy which percolates amidst the structured forms of the photographs is somehow personified in the innocent hoarding of trophy relics which, Croland notes, ‘looked exquisite’ when worn by Mapplethorpe.

Mapplethorpe had an eye that was aware of what setting and material would draw out the glamour of a human form – that which would embody it in its juxtaposition. In his case the jewellery reflects his innate battle with the world to find the perfect totem, the perfect body, the perfect moment. For all the provocation of his work, at the heart is a sympathetic naivete of one desperate to clasp at that fragile thing which is beauty itself.

‘The petals, bright as a cheek fell about him, dusting his hair. The crown jewels of Morpheus…he reviewed the particulars of his final act, and each phase fell as the petals shaking from his locks’ 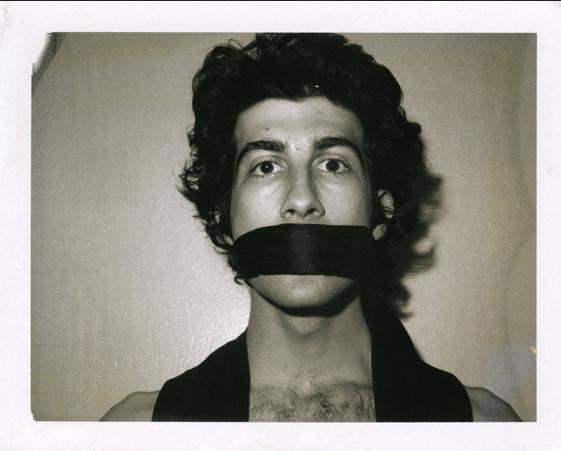 Glamour is an excess, it is indulgent and as addictive as the sex and drugs which circled Robert’s life. When true glamour is encountered it transports us into an alternative world of enchantment until, true to the transience of its glinting nature, it is gone again. Smith observes that Mapplethorpe ‘was destined to be ill. Quite ill’, though it was in ignorance of this that he was inspired with such feverish worship of subjects that would transcend time and spatial restrictions.

In apparent mimicry of the tensions that imbue his work with such charge, it is nevertheless with a sense of this incidentally affecting disjuncture that we leave the exhibition.

Mapplethorpe’s time upon the earth was tragically brief and yet, as he intended, his glamour lives on – in objects, in people, in his art – through his love.

Previous Story:
A Final Use for Crap CDs

Next Story:
The Jokers, Kings Cross