The Rainbow Singles Box set is a reissue of all the singles released by Rainbow from the years 1975 to 1986, on nineteen CDs, in reproductions of the sleeves of the original 7″ singles.

Over that period the band went through many lineups and changes in style, with the mercurial guitarist Ritchie Blackmore the sole constant factor.

The first incarnation of Rainbow with the late Ronnie James Dio was a classy hard rock act. The Dungeons and Dragons imagery of songs like ‘Sixteenth Century Greensleeves’ launched a thousand Scandinavian power-metal bands, but musically they were way ahead their time, and you can hear their influence right across hard rock and metal three decades later.  The way Ronnie Dio takes Deep Purple‘s ‘Mistreated’ and makes it his own shows what a class act he was as a vocalist.

At the end of the 70s Rainbow headed in a more commercial direction, now fronted by Graham Bonnet. They scored two big hits in the UK, the Russ Ballard-penned ‘Since You’ve Been Gone’, and dreadfully sexist ‘All Night Long’ (with that infamous toe-curlingly bad line “Don’t know about your brain but you look alright”).  The B-side, though, is an absolute gem: the sublime neo-classical instrumental “Weiss Heim”.

there are no fewer

than four versions of

‘Man on a Silver Mountain’

The 80s material with Joe Lynn Turner on vocals hasn’t aged quite as well as the music from the Dio years. Although it has its moments (especially the final flourish of ‘Street of Dreams’) much of the American-style AOR now sounds very dated, with Blackmore seemingly intent on creating a poor man’s Foreigner.

Possibly the nadir of the whole collection is ‘Difficult to Cure’, the cod-classical rock version of Beethoven’s ninth, which simply sounds embarrassing.

The boxed set includes all the singles released across different territories, so we get a lot of duplication where different countries got different B-sides for the same single. The same version of some songs appear two or even three times, and there are no fewer than four versions of ‘Man on a Silver Mountain’.

if you listen very carefully,

of a barrel being scraped

Rainbow only ever recorded three non-album B-sides, all of which were included on the still-available odds-and-sods compilation Final Vinyl, so there is little here for completists. As far as I can tell, the only tracks not available elsewhere are a couple of bootleg-quality live recordings from the Joe Lynn Turner era.

While it’s nice as a physical artefact, it does leave you wondering quite what the point is, especially given the very hefty price tag. As a Rainbow retrospective it’s missing too many of the obvious album highlights; no ‘Stargazer’, no ‘Eyes of the World’, no ‘Gates of Babylon’. You’re left with the conclusion that the whole thing is really targeting the “Birthday Present for Dad” market far more than that of the discerning music fan, and if you listen very carefully, you might hear the sound of a barrel being scraped. 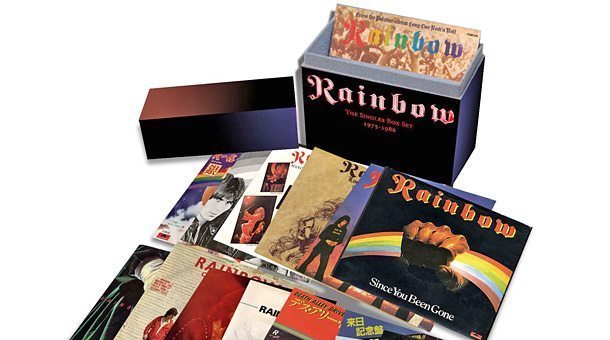 If you have fond memories of Rainbow from the 70s and 80s and only owned the records on vinyl, the relatively recent remasters of the original albums represent far better value for money.