Rad! The Star On the Brink of a Black Hole

[dropcap style=”font-size:100px; color:#992211;”]T[/dropcap]eetering on the brink of a black hole, flinging itself around the thing at a staggering velocity just out of the gravitational reach of the singularity.

Imoressive stuff. No data revealed as yet as to whether it’s being piloted by a wide-eyed millenial jacked up on energy drinks and hoping for a sponsorship deal.

Astronomers have found evidence for a star that whips around a black hole about twice an hour. This may be the tightest orbital dance ever witnessed for a black hole and a companion star.

Michigan State University scientists were part of the team that made this discovery, which used NASA’s Chandra X-ray Observatory as well as NASA’s NuSTAR and the Australia Telescope Compact Array.

The close-in stellar couple – known as a binary – is located in the globular cluster 47 Tucanae, a dense cluster of stars in our galaxy about 14,800 light years away from Earth. While astronomers have observed this binary for many years, it wasn’t until 2015 that radio observations revealed the pair likely contains a black hole pulling material from a companion star called a white dwarf, a low-mass star that has exhausted most or all of its nuclear fuel.

New Chandra data of this system, known as X9, show that it changes in X-ray brightness in the same manner every 28 minutes, which is likely the length of time it takes the companion star to make one complete orbit around the black hole. Chandra data also shows evidence for large amounts of oxygen in the system a 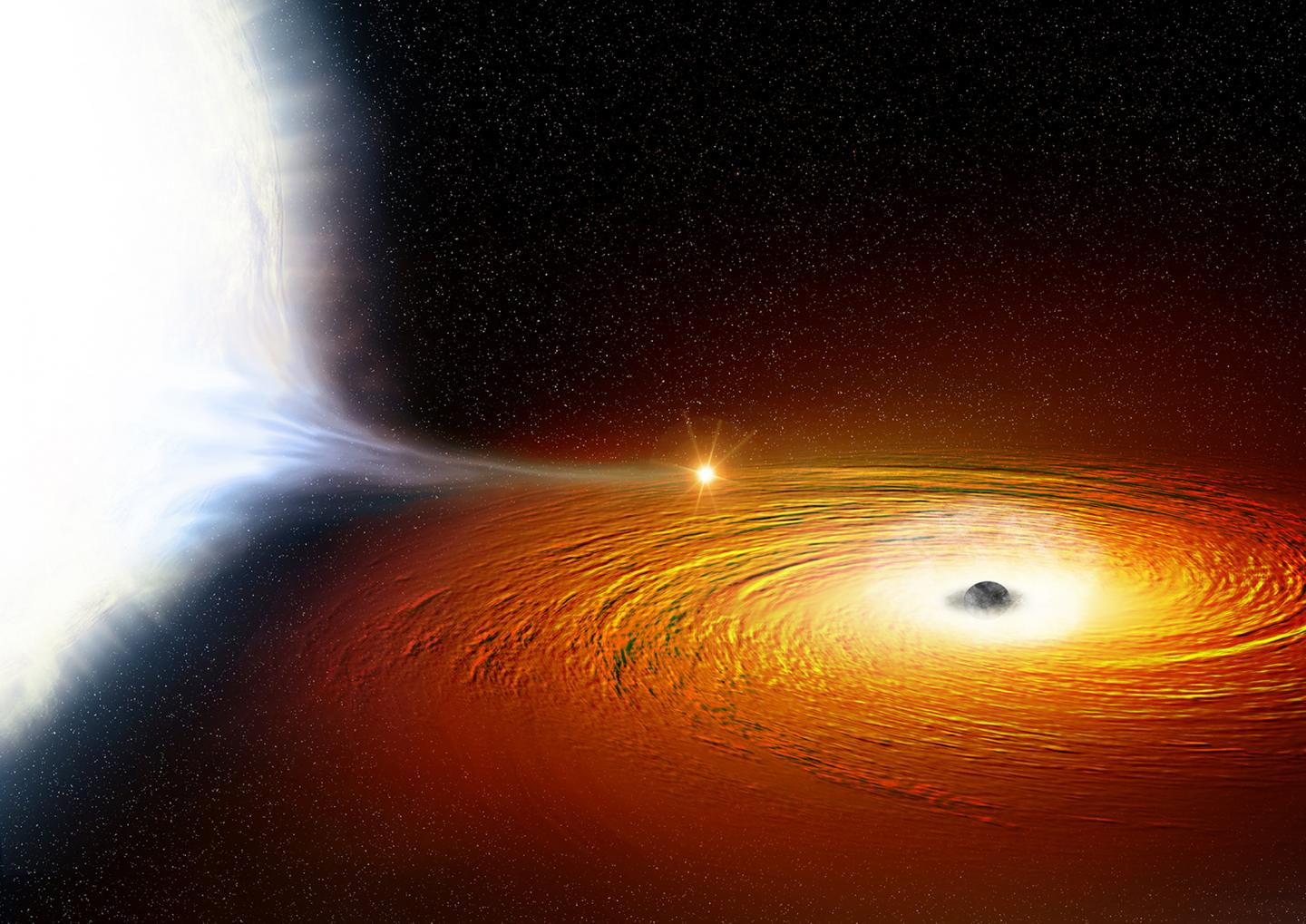 characteristic of white dwarfs. A strong case can, therefore, be made that that the companion star is a white dwarf, which would then be orbiting the black hole at only about 2.5 times the separation between the Earth and the moon.

“This white dwarf is so close to the black hole that material is being pulled away from the star and dumped onto a disk of matter around the black hole before falling in,” said Arash Bahramian, lead author with the University of Alberta (Canada) and MSU. “Luckily for this star, we don’t think it will follow this path into oblivion, but instead will stay in orbit.”

Although the white dwarf does not appear to be in danger of falling in or being torn apart by the black hole, its fate is uncertain.

“For a long time astronomers thought that black holes were rare or totally absent in globular star clusters,” said Jay Strader, MSU astronomer and co-author of the paper. “This discovery is additional evidence that, rather than being one of the worst places to look for black holes, globular clusters might be one of the best.”

An alternative explanation for the observations is that the white dwarf is partnered with a neutron star, rather than a black hole. In this scenario, the neutron star spins faster as it pulls material from a companion star via a disk, a process that can decrease the rotational period of the neutron star to a few thousandths of a second. A few such objects, called transitional millisecond pulsars, have been observed near the end of this spinning-up phase. The authors do not favor this possibility as transitional millisecond pulsars have properties not seen in X9, such as extreme variability at X-ray and radio wavelengths. However, they cannot disprove this explanation.