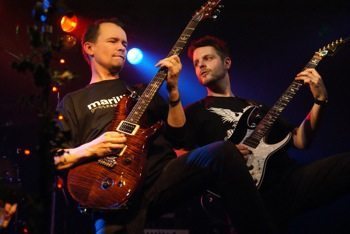 Panic Room have come a long way since their first live appearances back in 2008.

The band  emerged from the ashes of the first incarnation of celtic proggers Karnataka, with that band's backing singer Anne-Marie Helder stepping up to front the new outfit. 2011 saw their most ambitious tour to date, taking in the length and breadth of the country rather than the handful of gigs in major cities played by many of their peers.

The tour's final stop was The Robin 2 in Bilston, one of Britain's premier classic rock, progressive rock and blues venues outside the capital. Tucked away in the heart of the Black Country they always put a lot of work into promoting their gigs, so even for a Sunday night they managed to draw what's probably the biggest crowd Panic Room have seen all year.

First was a short but sweet acoustic set from singer-songwriter Sarah Dixon, accompanied by Panic Room's Paul Davies on guitar for a couple of songs. Then came York's Morpheus Rising, playing  a contemporary and highly melodic take on old-school metal. They rocked. The twin-guitar harmonies of Pete Harwood and Damien Sweeting owe a lot to Iron Maiden, with a bit of Wishbone Ash thrown in for good measure. Their high-energy set drew from the forthcoming debut album Let the Sleeper Awake with the brooding "Those Who Watch" a particular highlight. This was a band in a different league to many typical support acts for gigs at this level. 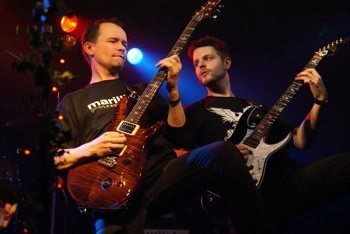 Then it was time for Panic Room themselves, who proceeded to blow the roof off. It was one of those performances where you could tell that all five band members were enjoying every moment on stage. They got off to a powerful start with the as-yet unrecorded "Song for Tomorrow", a dynamic twin-guitar epic as good as anything they've written to date. From then on the set drew heavily from their most recent album "Satellite", including the driving hard rock of "Freedom to Breathe", an intense "Picking Up Knives", and the emotionally powerful ballad "The Fall". A real highlight was the monstrous "Dark Star" with it's sinister organ chords and Black Sabbath-inspired bass riff.

Other numbers included their swamp-blues cover of ELP's "Bitches Crystal" which improves enormously on the original, a great full-band arrangement of "Exodus", originally a piano-and-vocal ballad from Anne-Marie's 2004 solo EP "The Contact", and a second new number, "Promises", another very dynamic song which augers well for the album the band will be recording in the new year.

One of the great things about Panic Room is that they're all clearly virtuoso musicians, but they avoid lapsing into self-indulgent extended soloing or unnecessary showboating. Instead, their talents and diverse influences make for a rich multi-layered sound. Yatim Halimi and Gavin Griffiths are one of the best rhythm sections for any band at this level, Jon Edwards' keys and Paul Davies' guitar add swathes of colour and texture. Above all, Anne-Marie Helder is a star, a tremendous voice combined with great stage presence, it's no surprise that in 2010 she was voted female vocalist of the year by the readers of "Classic Rock Presents Prog". 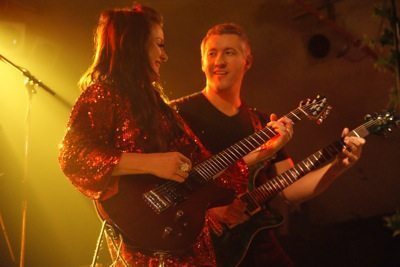 They tend to get labelled as a prog band, but they're far more than that, with elements of rock, folk, and metal in their sound. There's more than enough musical depth to satisfy all but the most narrow-minded of prog fans, but their highly melodic songwriting is both strong and direct enough to have crossover appeal to a broader rock and pop audience.

The choice of encores spoke volumes about their far-ranging influences. First an absolutely spine-tingling "Coventry Carol", sung solo by Anne-Marie. Then the well-known Metallica hit reworked as "Enter Santa", with lines like "Forget that noise you heard/ It's just the reindeer on the roof/ On the chimney with their hooves..", ending with their own "Sandstorms", reworded for the season as "Snowstorms".

it was clear that this one was something special

Even by the high standards of Panic Room's live performances over the year, it was clear that this one was something special, and they ended the year with a bang. They've come in for some rather unfair criticism recently with the implication that Anne-Marie's juggling her roles fronting Panic Room with playing as a multi-instrumentalist for Mostly Autumn is holding the band back. That's nonsense, of course. Here's hoping 2012 proves to be the year when all the hard work they've put in this year finally pays dividends, and their music reaches the size of audience it deserves.

Previous Story:
The Wedding Present: BACK!
Next Story:
Sound Helps You See!