Leonard Rosoman’s paintings of John Osborne’s 1965 play A Patriot for Me shine light on a stage production that was an important chapter in LGBTQ+ history. 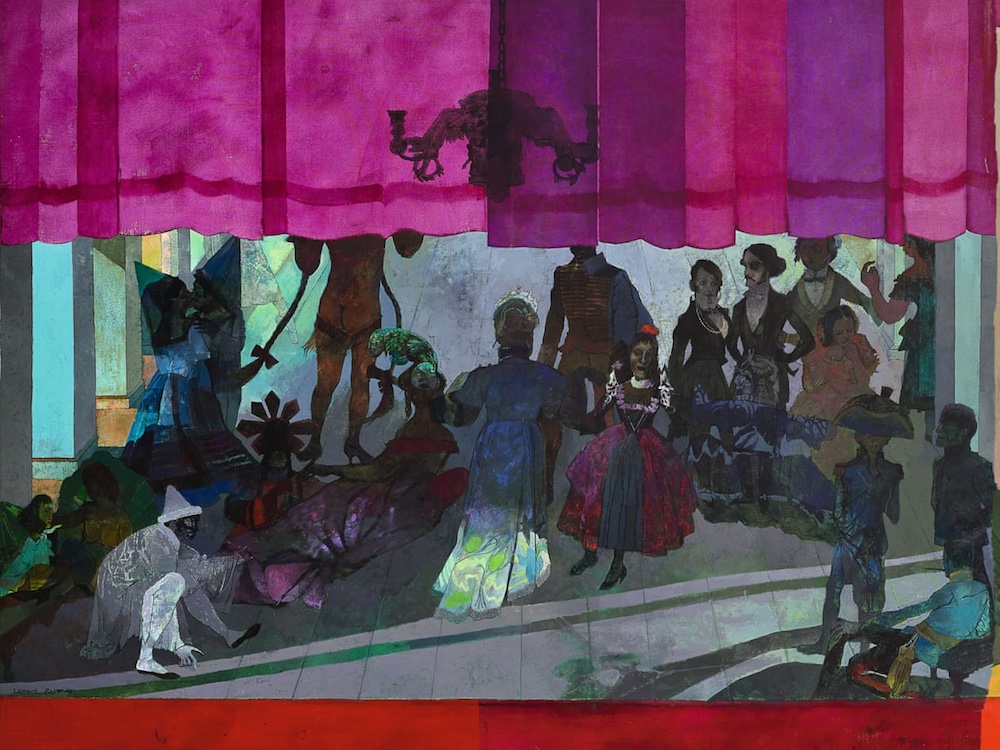 [dropcap style=”font-size:100px;color:#992211;”]P[/dropcap]aintings that show the first gay kiss in British theatre history and an extravagant drag ball have been acquired for the nation in lieu of inheritance tax.

Pallant House Gallery in Chichester, West Sussex has announced it is now the owner of five paintings by Leonard Rosoman from the 1960s.

“They are really wonderful works,” said the gallery’s director, Simon Martin. “On many levels they are exciting things for a museum to acquire. He has captured an extraordinary moment not just in theatre history but in British society.”

The paintings shine light on a stage production that was a fascinating chapter in LGBTQ+ history, and one that helped pave the way for the abolition of theatre censorship.

Rosoman, probably best known as a war artist, was a friend of ‘Angry Young Man‘ playwright John Osborne so was in the first-night audience for Osborne’s 1965 play, A Patriot for Me.

The epic play is based on the true story of Alfred Redl, a blackmailed gay spy in the Austro-Hungarian army. It was banned by the lord chamberlain’s office because of its homosexual content, but determined producers exploited a legal loophole that saw London’s Royal Court theatre turned into a private members’ club for the duration of the run.

Its most controversial scene is the curtain rising on an aristocratic Viennese fancy-dress ball where the audience gradually grasps that almost all of the many protagonists on stage are men. Two of them are kissing. Rosoman was captivated by the show and returned every evening for a fortnight to create drawings by torchlight.

Two years later, the drawings would form the basis for a series of paintings and gouaches. Five of these, from the estate of the artist’s widow, Roxanne Wruble Rosoman, have been acquired under the acceptance in lieu scheme, settling £96,600 of tax.

The paintings include depictions of the Royal Court’s director George Devine in drag, with a chandelier seemingly on his head, as the aristocratic Baron von Epp. Another character is wearing a jewelled jockstrap. Other actors who can be made out include Maximilian Schell as the doomed Redl and Jill Bennett as the Countess Sophia.

The paintings had a real sense of drama about them, said Martin. “Rosoman is really thinking about the experience of being in a theatre and the shock of what people would have witnessed. This was the key moment in the play and was so controversial.”

Until they were shown at the Pallant House Gallery in 2018, the Patriot for Me paintings were little known and largely unseen. The play itself, rarely performed because of its large cast, was part of wider debates about sexuality and censorship and helped lead to the 1968 Theatres Act, when stage censorship was effectively abolished.

Edward Harley, chair of the acceptance in lieu panel, said the pictures were some of the most important from Rosoman’s career and were based on a play that “broached the shift of sexual attitudes of the 1960s”.

“I hope that this example will encourage others to use the scheme and continue to support our national collections,” he said.

Pallant House expects to reopen in August, however the Rosoman paintings will not be on show immediately; the gallery will reopen with displays that had just opened prior to lockdown in March.

Next Story:
Always-On, All-the-Time: COVID in the World of 24/7 News