Morta Skuld's demos are a time capsule to a musical history which never happened.

Difficult though it is for filesharing apologists to countenance, the pre-Napster period of the 1990s was a healthy and vigorous time for musicians and bands. Despite the rudimentary appearance of the internet at the time, and the (gasp!) non-existence of Twitter, FaceBook, Bandcamp or MySpace, it was more than possible for individuals to dedicate time and effort to rehearsing, recording, playing and writing material, getting it onto disk, and making a living from playing and selling their music.

Whilst not every band made it, there were certainly plenty whose efforts rewarded them enough to keep trying. Local scenes developed, fanbases were made, a devotion to acts and genres existed that cannot even be imagined by the most hardcore devotee of subculture music in 2011. Diversity too.

Unless you can sell a million albums, no major label or large independent has any interest in you

In 1991, the UK number one album spot was held by acts as various as Metallica, Enya and Luciano Pavarotti . Genre allegiance was not reflected by FaceBook 'likes' or re-tweets of YouTube videos, but by the records you bought, and played when your friends came around. Independent record labels could survive and thrive on sales of less than ten thousand per act, hoping for but not dependent upon the crossover hits which occasionally caught the imagination of the general public and bankrolled the next twenty years' worth of A&R.

The big labels did what they still do – investing huge amounts of promotional and publicity budget into a small number of acts which they deem likely to sell large amounts of product to casual listeners. The investment is huge, the payback is correspondingly massive. Since then, and in the fifteen years the music industry has spent coping with the transition from a business model where purchase is obligatory to one where purchase is optional – the business model of the big companies has changed little. It's still a case of big promotional investment for big returns. The difference is that they spread that investment over an ever-decreasing range of acts – only those acts who can absolutely guarantee a profitable return see any investment, and even that comes on far less generous terms to the artists than it did in the 90s. Unless you can sell a million albums, no major label or large independent has any interest in you – the promotional efforts needed to sell a record when there exists the option of torrenting or streaming it are now so great as to not merit bothering unless the numbers are huge.

the democratisation of the music-making process to the point where it can include those whose determination or professionalism would never have survived the pre-Napster music industry has actually NOT led to more diversity, eclecticism and undiscovered virtuosity than ever before?

For a small, niche act, the options are pretty grizzly. There is the fan-funding, self-release route. You build a fanbase somehow, it helps if you're located in a large population area. Gigging mercilessly, at your own expense, working the social media, tirelessly ramming your online presence down the throats of anyone who will pay attention in the hopes that, in return for a limited edition weed-grinder or coloured vinyl seven-inch of your upcoming record, enough people will chip in the cash to pay for you to record and press your release. Of course, when you've already bled your fanbase dry in order to get your record made, and once you have a garage full of the things, there's no-one else to sell them to unless you go out and tour somewhere else. Unfortunately, touring costs money and your local fanbase seems a bit reluctant to give you their cash so that you can go play gigs elsewhere.

Welcome to Music 2.0, friend, don't you wish people would just start buying records again? How about going with an indie label? They're everywhere right now, everyone's got one. Surely they'll take you on. Until it turns out that all they can help you with is getting your record made – they won't throw money at you either unless you can show them that you're selling units. So it's back to MySpace, and to hell with it, you can record the record in your garage anyway – technology's cheap, it won't sound perfect but it'll do, and you can get it onto iTunes within a week. Who needs a label?

In 2009, Nielsen Soundscan reported 97,771 albums released digitally. Many albums were released online without going through the retail channels that Nielsen Soundscan monitors. That's around two-thousand albums per week. Diversity? Certainly. Quality? Who knows? Is there any reason to suggest that cheap recording technology and digital distribution has increased the number of talented musicians in the world? Or to change mileu for a moment for metaphorical reasons; has access to OpenOffice and WordPress suddenly increased the number of great writers? Does the fact that anyone with about a week's worth of patience can now record and release an album enrich the cultural tapestry of our world or does it dilute it? Could it be the case that, contrary to the ideal, the democratisation of the music-making process to the point where it can include those whose determination or professionalism would never have survived the pre-Napster music industry has actually NOT led to more diversity, eclecticism and undiscovered virtuosity than ever before? You decide.

Why the long intro? Because Morta Skuld's 1990 demos 'Gory Departure' and 'Prolong the Agony' display a professionalism and attention to detail that is unthinkable in 2011. Both demos, clearly recorded as a rough example of their repertoire with the intention of showcasing the band's ability to play and write songs, were nonetheless recorded with a view to being cleaned-up, rearranged, re-visioned and re-worked by a producer or sound engineer with skills beyond those of the band's lineup.

The self-consciousness of the vocal delivery pervades throughout the demos, with the development of the death metal 'grunter' voice happening as the tracks progress.

Sure, they were as good as they could be, but Morta Skuld were obviously aware that they needed help – sonically and compositionally – as well as in the nuts and bolts business of reaching more fans and selling records. That said, the level of technique, talent and determination shown on these rudimentary recordings is astounding in a 2011 context. Even the ropey drummer on 'Gory Departure' plays with more aplomb and discipline than 99% of the 'finished' records for sale on Bandcamp. 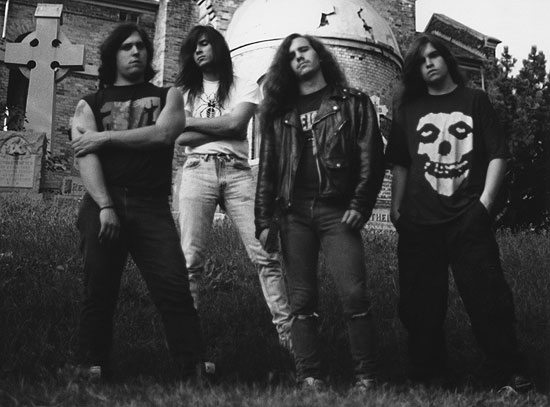 These recordings are obviously demos – the drums are not well mic'd, and despite being re-mastered for this re-release on Relapse, there is no disguising the feebleness of the double kickdrum rhythms. Disguising the limitations of the drummer on 'Gory Departure' is beyond the abilities of any mastering engineer though – his inability to keep time is such that the arrangement of the songs is actually built to accommodate his shortcomings. The speed-riffs on the first demo occur without the accompaniment of drums, with the timekeeping provided by the guitarist instead. It's obvious that the frenetic scatter of Jesse Rofritz's percussion is designed to hide the unfortunate fact that he is thrashing about wildly, chasing to keep time with the rest of the band. By the time Morta Skuld recorded 'Prolong the Agony' the drummer has been replaced, and the difference is obvious.

As proto death-metal recorded in 1990-91, there is a distinct feeling to the demos that not only is the band searching for its own sound and lineup during the recordings, but is also struggling with defining the parameters of its genre. Dave Gregor's vocals on 'Through the Eyes of Death' are unconvincing in their studied and self-conscious attempt at valedictorian malevolence:

'he walked through the Valley of Death and he saw every horror known to man
he saw corpses piled high….
And the only way he could understand these things
Was to see it through the Eyes of Death'

The lyrics are clumsy, and just about worthy of a secondary-school halloween play. It is unsurprising that Gregor delivers them in a high-camp hellfire preacher's register – a vocalist needs to distance himself from stinkers like that. The self-consciousness of the vocal delivery pervades throughout the demos, with the development of the death metal 'grunter' voice happening as the tracks progress. There is the same lack of confidence to the lyrics, as if the writing sessions consisted of gathering together as many words as possible which may be deemed as shocking, controversial or resonant with the type of low-grade blasphemy and sedition which are so effective at causing outrage amongst the pillars of middle-American society (the band hailed from Milwaukee, Wisconsin. No Happy Days references, please). There is the sense that the band was hoping for the free PR that comes with being banned from local airplay. Words like 'Consecrated' and 'Sacrificial' abound, as do provocative critiques of celebrity preachermen: 'the only way to combat evil is through personal prayer, and also, to send me your money'. Whilst it may seem harsh to apply hindsight, it should be noted that these demos post-date Depeche Mode's mid-career themes of frustration with religious dogma; Napalm Death's 'Scum'; and only just pre-dates the lampoon of cash evangelism that was Genesis's 'Jesus He Knows Me'. The point being, none of this was particularly new ground.

What saves the demos though, is the exuberance of the music. Not yet pinned into the strict definition of micro-genres that is Music 2.0's tedious legacy on the musical panorama, Morta Skuld take diverse tropes of metal and rock and are wholly unashamed to cut and paste them into their sound. There are the tempo step-ups and downtuned guitars of Black Sabbath grinding consistently through the recordings, blistering double kickdrum blastbeats (on Prolong the Agony anyway), there are speed riffs and, lord bless us all, there are actually GUITAR SOLOS! It may seem difficult to believe after nu-metal rinsed all the 70s progginess out of metal sometime in the early 90s, but there was a time when metal bands lived and died on the basis of whether their guitar solos were any good. The shred on 'Senseless Killing' is testament to a time before the well-meaning but ultimately detrimental democratisation of music consigned virtuosity and technique to the scrapheap, and it is a joy to hear. In that sense these demos are artefacts of a time when white middle-class American angst had its own home-grown voice and when what it lacked in eloquence it made up for with passion. Within a year or two of their recording, it became evident that white middle-class America preferred to have its angst and frustration documented by rap and hip-hop, but for a couple of years in the 90s, it might have been different.

Morta Skuld: Through the Eyes of Death – The Early Demos is released on Relapse on July 5th 2011