While many can answer the question of who the diminutive French/Spanish Singer Manu Chao is, for the general population the extent to which he is globally huge is unknown. Let's be frank, Manu Chao has sold a lot of records, and by a lot we're talking A LOT. His first solo album sold in excess of 10 million and his following records probably did as well and yet he resonates as a humble and moving performer deeply connected not just to his audience but the grassroots world.

While coy about the exact political nature of his music (personally he is vocally a left centred anti-globalist) describing it simply as a presentation of the reality he witnessed in his travels, his music has become the rallying point for a number of organisation. So it was fitting that his end of tour show was in support of Colombiage an arts organisation promoting Colombian arts, culture and discussion. In fact looking at Manu Chao’s work there is a sense of effective multiplicity in his whole operation.

Backstage was a riot of old relatives, young fans, Rastafarian collaborators, cooks, earnest Colombian poli-chicks all rushing about on errands, making sure that everything went perfectly. Everyone multitasking, bringing it all together, much like Manu Chao’s music all things working simultaneously on different levels, achieving multiple aims, with a singular goal – an inclusive positive experience. As a result when it comes to Manu Chao, this was it, the devotees and family all hard-at-work or hard-at-inspecting practically shining with a tangible sense of fealty, love and near religious mania.

At the centre of it was the man himself, relaxed, open and friendly. During soundcheck an exasperated Guitar Tech struggling with a temperamental guitar pickup told the inquisitive Manu that ‘it’s not producing any sound’ to which he patted the man on the arm replying ‘For me, that’s probably a good thing.’ And then he was gone. 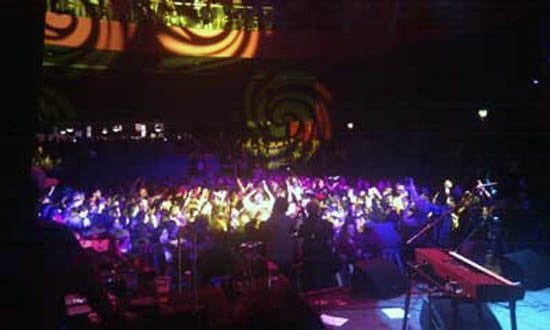 Scenes outside the venues were riotous, the mostly Latin crowd drank, danced and sang songs clamouring against the Coronet’s glass doors before finally spilling through to rush for the prime real estate hard against the barriers.

The support act Saravah Soul played a hybrid of a number of rhythmic styles, afrobeat, funk, latin to the crowd and managed to get people dancing and ended their high energy set with a drum laden crowd invasion. They were rewarded with great applause and seemed genuinely thrilled to have been given the opportunity to play before Manu’s crowd especially since they were a last minute substitution.

As the roadies moved each part of Manu and his bands kit onstage, each item was greeted with a roar of applause, which built and built until the man himself took the stage. Latin crowds are expected to be energetic but on this occasion they outdid themselves, arms stretched out to touch the Man, bearded fat men cried openly wiping their tears with Mexican flags, bra’s were thrown, and of course cameras flashing from every corner of the two storey venue.

Manu usually tours with a large band however for this gig he stripped it right back to himself on acoustic guitar, Phillipe on drums and a Madjid, his regular lead guitarist. Listening to Baionarena the sheer number of musicians meant that actually everyone played succinctly however with the smaller combo Madjid and Phillipe were given free lead to play as loud and as heavily as they wanted. The result was a much more punky, raw, and incendiary performance than evidenced on the live document.