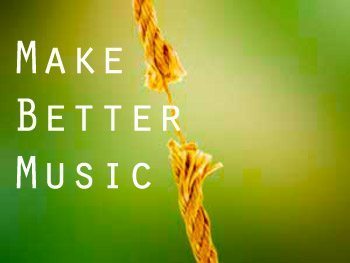 I don’t really believe in good and bad music.

That might seem like high-order fence-sitting, but it’s more a case of recognising that everything has it’s place, and that there’s no accounting for taste…or context. The sound of an eight year old in their first week of violin practice coming through the walls might be a nightmare to you, but to the parents of that child, the moment he/she plays that tune well will be some of the sweetest music they’ll ever hear.

As Parliament so sagely put it, “Everybody’s got a little light, under the sun”.

Having said that: WARNING! There’s a huge tidal wave of music approaching!
The overwhelming majority of it is not even wanted, needed or asked for. Sadly, the best I can say about it is that it comes from ignorance and knows no better.

At the risk of sounding like an Eighties movie, computers have opened up music making to those who don’t have the patience to practice. This in itself, of course, is not a bad thing. There are no bad things in music, remember?

Alas so many of these people cannot conceive that using the presets in software sold to 10 million other people, will mean your music sound EXACTLY like 10 million other peoples music.  This is not the same as playing an instrument like the guitar or violin, where your body will actually alter the sound or a wind instrument where your breath and playing style will always unique to you. Even the piano, in some ways the most rigid of instruments reacts to the player in way that software doesn’t.

This doesn’t matter when the music is made for personal enjoyment, making music is a wonderful hobby. It’s when this music gets put out into the world as “art” or at least “good music” – when the creator has no idea of how naive he/she looks, or how they are adding to an ever increasing tidal wave of music that’s pretty much the same.

It’s not that their music is bad…it’s just unexceptional. There’s loads of stuff like it, and there’s nothing that stands out about it. There’s not really any need for it as listening to one of the million other similar tracks will do the same job…

As Captain Beefheart wisely said: “If you want to be a different fish, you have to jump out of the school”.

Think about the methods you use, the music you’ve heard, the tools you use and the abilities you have. Think about what makes your music special, ask yourself what makes it different and unique and enjoyable? What makes it mean something to another person, that they will not get from any other music.

What will people get from you that they can’t get anywhere else?

Don’t be blinkered and don’t assume your own uniqueness. Facing up to this is a daunting task but through the doubt, worry and pain will come a new strength and inspiration. If you can handle the process that is, working this way WILL turn you from a dabbler into an artist but be warned, there is always a high price to be paid for great artistic achievement.

Next Story:
Chromagain – Any Colour We Liked