What to do on such a glorious Bank Holiday Monday afternoon?

Head to the beach perhaps, or picnic in the countryside? Maybe a lazy day enjoying the delights of our great capital city is your thing?  Whichever piece of downtime you choose, it is fair to say this country really does have much to offer and on a beautiful sunny day like Monday, 27th May we are reminded we do still live in a green and pleasant land, and are all very lucky to be able to do so. Perhaps there may even be occasion to celebrate that fact.

So what kind of sunny little message did Monday’s march in central London by the English Defence League (EDL) send to the masses of tourists who decided to spend their hard earned cash in our capital, or to the citizens of this country who were out trying to relax and enjoy an extra day off work? Well judging by the look of disgust on their faces, not a very good one. 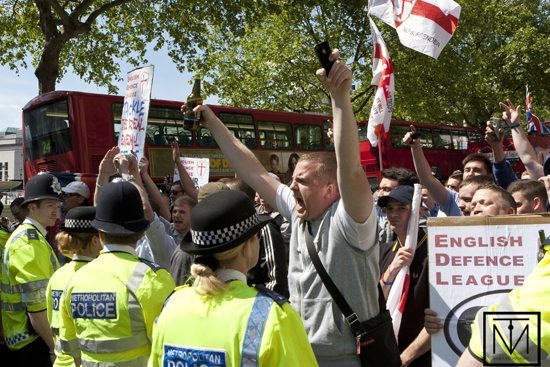 Sweaty and scowling, they moved like red, white and blue cockroaches from the cheap watering houses of London town. A slow stream of beer sodden, flag waving and abuse hurling all-sorts oozed toward Trafalgar Square like a slippery river of vomit flowing steadily down the granite gutters. Admiral Nelson looked on, towering over the assembled pool of sickly racist rants whilst the police held them firmly at bay (and despite reports to the contrary, made it very clear this march would be conducted firmly within the constraints of a very solid blue line). 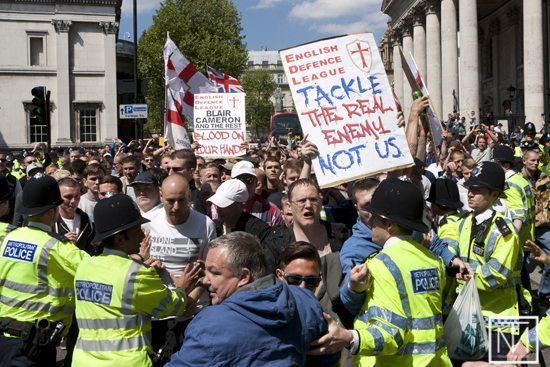 It was obvious that other ‘plain clothed’ members of the EDL were active outside the march (when I say ‘plain clothed’ I refer to what looked like knocked-off sportswear). These outsiders seemed to be egging on those contained by the police line but their actions proved ineffective, much to their chagrin. 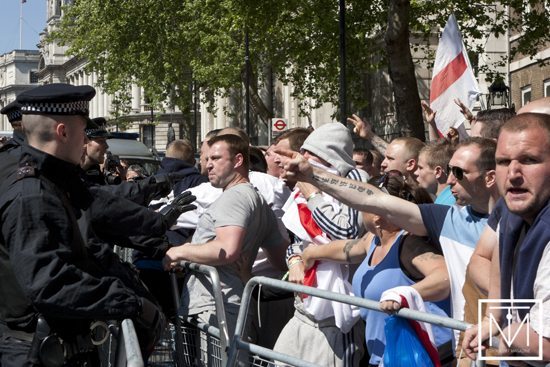 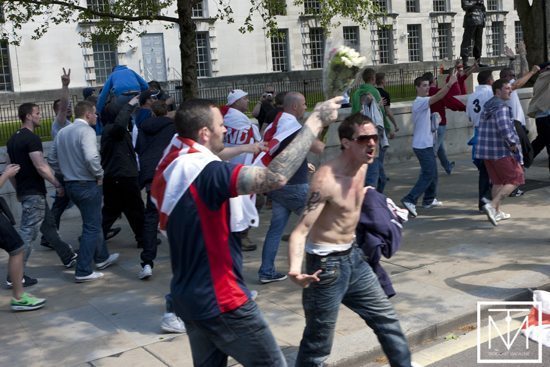 Credit where credit’s due to the police here. From a security perspective they were operating at 100%. Despite the minor scuffles and the pushing and shoving by the EDL horde, the police held ranks firm and fast and didn’t flinch at the tirade of abuse that was being directed their way. The demonstrators were held securely in key stages whilst other officers were deployed and readied further along the route. 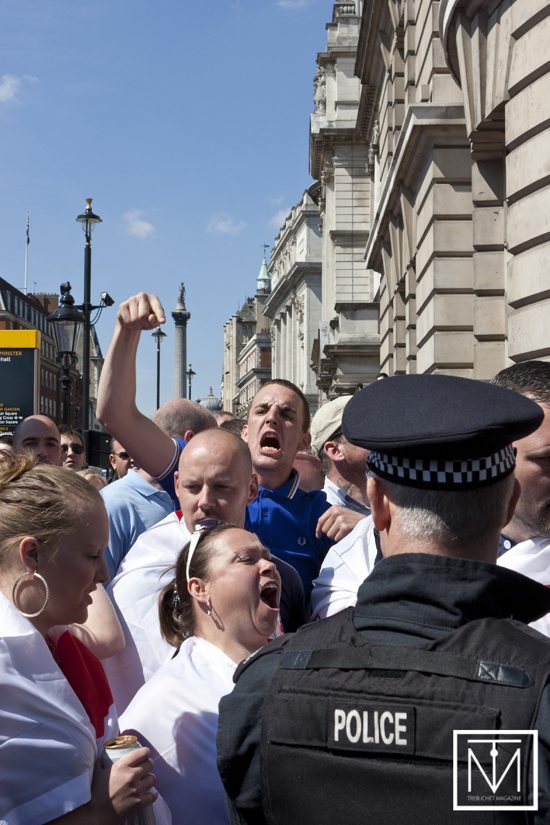 Observing these ‘people’ makes you rather sad and actually rather embarrassed. This is certainly not the face I want presented of this country. Amongst the interesting selection from the gene pool here were the usual casual football hooligans (the real footie fans were watching Watford lose at Wembley), aging skinheads and wannabe Nazis, most identifiable by their cheap tattoos (remember those attractive NF and bulldog tatts on arms and foreheads in the eighties – quality). 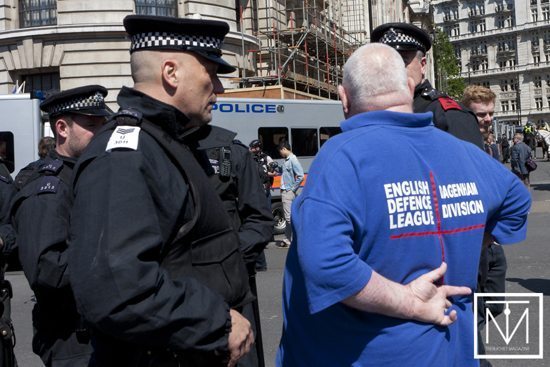 There were also males and females barely into adulthood, brains already suitably addled, skin suitably defaced and mouths spewing out a senseless stream of dribble and racial abuse to anyone unfortunate enough to gaze upon them from behind the metal safety barriers. The expression: ‘Your mother must be proud,’ flashes through your head, but ironically, it did actually look like some had their mothers with them! It really makes you want to apologise to the hundreds of bemused tourists who were stopped from enjoying our capital on an otherwise perfect day. 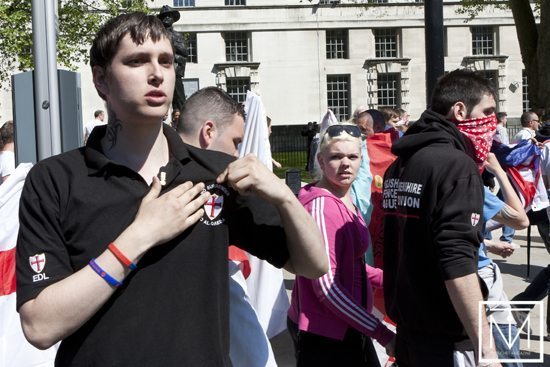 The police did, however, let themselves down somewhat by grabbing a banner bearing the words ‘EDL Racists’, which was unfurled by anti-fascist protestors a considerable distance away from the EDL marchers. One can possibly understand the fear of provocation, but the seizing of one small banner held up in defiance against the EDL placards seemed a little over the top, if not heavy handed, considering. The police also pushed our photographer twice, which is not a good idea. 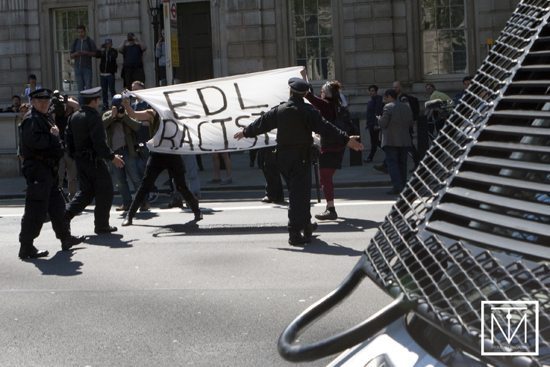 With the chant of “GB RIP” echoing through London’s cordoned off streets, the EDL seem to be oblivious that it is their own actions and behaviour that is hammering the nails into the GB coffin. As for “There’s only one Lee Rigby”, sadly there is one less Lee Rigby, and organisations such as the EDL are attempting to exploit his death to whip up a storm of racial hatred towards all Muslims. Lee Rigby died in his Help for Heroes shirt, an organisation whose name is plastered all over the EDL banners, but who refuse to take money offered by the EDL. 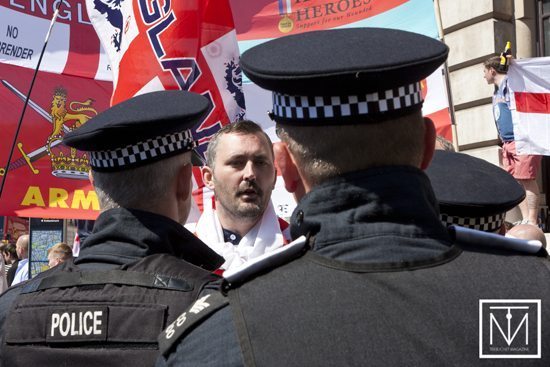 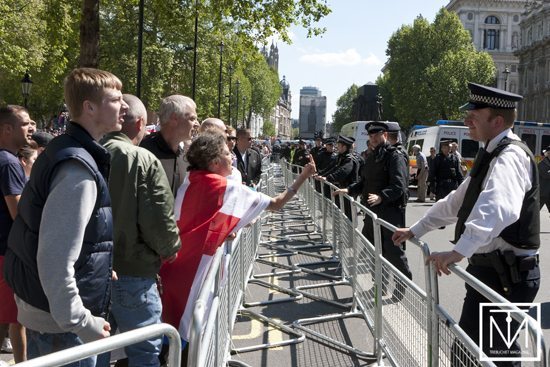 One retort of ‘Nazi scum, off our streets’ by the anti-fascists was perhaps misplaced, in as much as I believe the Nazis were extremely well organised and well disciplined with a leader that at least could string a sentence together. I have never seen footage of the Nazi party swigging Special Brew and chewing their faces off at the Nuremberg Rally. So I guess the answer to, ‘What’s lower than a Nazi?’ could well be an EDL member (add your own EDL member joke here). Indeed, the demonstrators who deemed it necessary to flip a Hitlergruß (Nazi salute) were probably the weak and very feeble-minded people Hitler may have had a slight intolerance towards (I’m sure our grandparents fought a war against this, didn’t they?). 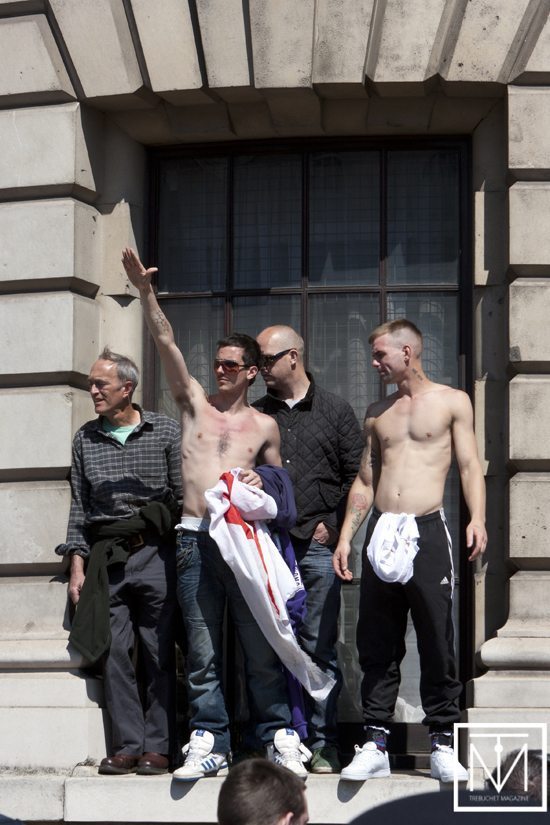 An enduring moment of this whole day is of one EDL demonstrator stopping to ask the press why they were photographing only the idiots and drunken people.

Why do you think?!