Look On My Works, Ye Mighty. And Grind.

Buried hubris and follies of personality along southern France’s Atlantikwall

Just before the river at Bayonne and marked by the acid yellow on royal blue signage of a recently opened IKEA, the motorway divides for the A63/A64 interchange. Traffic, which has been stacked in an unholy cluster since the Irun crossing point in Spain, divides neatly into those with surfboards strapped to their roofs and those with skis.

A mobile symbol of the eternal dichotomy of the human experience, perhaps. The Mutt/Jeff, Cain/Abel, Gilgamesh/Enkidu paradigm made visible in luxury sportsgear. Sufing as the wild, masculine clique, untrammeled by the strictures of lineal citizenship, of built environment, the kinship of hunted-down wave uniting banded roamers unherded in the winedark sea? Whilst those heading eastwards to Gourette, Saint Lary and Formigal form placid queues for chairlifts; a barcoded daypass the crucial key to groomed nature, mulled wine, on-piste domestication? 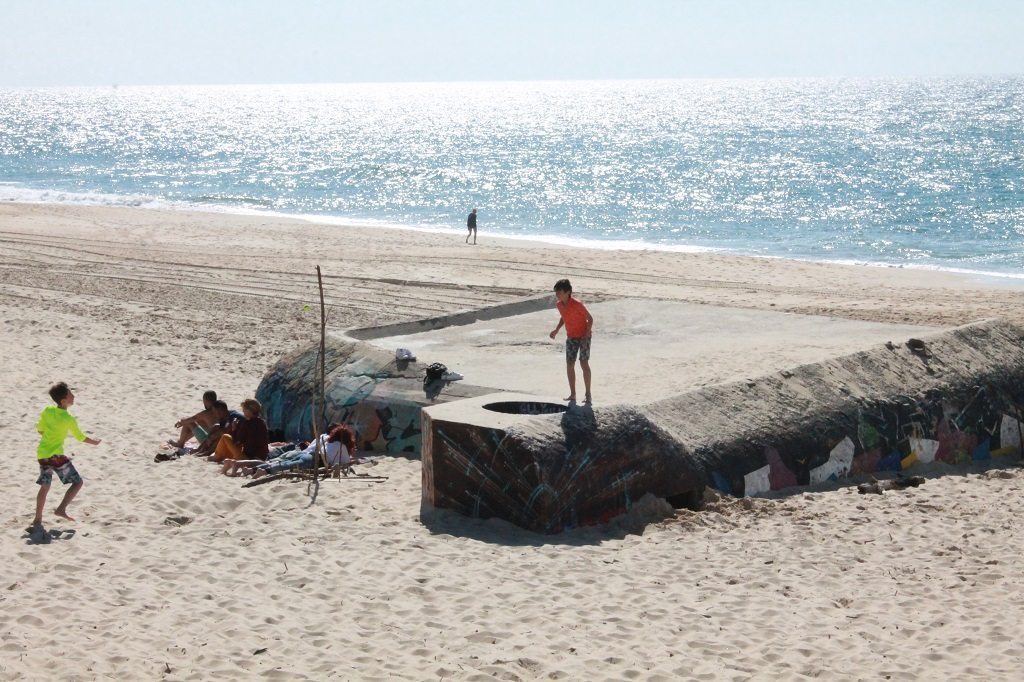 One can ride a metaphor too far; neither group will go hungry tonight if their session goes awry.

Follow the peage another half-hour, enough time to watch the steep slopes of Basque pasture level out, watch valley-sheltered beech forest subside and be replaced by ranks of Scots pine, mature now and ripe for toppling, planted at the behest of Napoleon III to drain the malarial swamp of the Landes and now a selling feature for tourism. ‘Sourire, respire. Vous etes en Aquitaine’ reads the roadside region marker. Breathe, we have trees.

Onwards to the object of the journey – Casernes beach just north of Seignosse, site of a sometimes-buried WWII gun emplacement peeping out from the ever-drifting dune. One small bead on a line of hubris stretching from Holland to Spain: Hitler’s Atlantic Wall. Starting in 1942, the drive to build a series of guardhouses, emplacements and fortified pillboxes crippled Third Reich budgets. 17 million cubic metres of concrete were poured into the modular forms, following standardised blueprints, along with 1.2m tonnes of steel desperately needed elsewhere for tank and U-Boat production. Field Marshall Erwin Rommel, tasked with overseeing the Atlantikwall in 1944 regarded it as near-useless, having to add mines and obstacles to cover the large gaps between the firing arcs of adjoining structures. The Wehrmacht commander in France – Generalfel-marschall Gerd von Rundstedt went further, deriding the project as a propaganda bluff, diverting much-needed resources from the U-Boat pens at La Rochelle further north.

Yet despots must have their walls, particularly when they have promised that bluntest of protection metaphors to a populus whipped into fear of what Other lies on the opposite side. The soft-powers of counter-espionage, misdirection and Bletchley Park negative entropy eventually combined with true grit battlefield bravery to sucker-punch occupied France at Normandy whilst the Atlantic defences languished untested, distributing personnel and resources to the wrong place at the wrong time whilst key strategic points inland of the D-Day landings went underdefended.

Walls and unchecked hubris are historical bedfellows. The static and immovable are poor media for expression of human ambition, outlasting the Ozymandias grandiosity of their original purpose to leave comical relics for repurposing. Beachgoers now derive an undesigned protection from what remains of the Atlantikwall – using it as a windbreak from afternoon northerlies. At the Casernes, rangy kids take turns lobbing tennis balls into the empty gun turret; driftwood folk-sculptures make a pergola of a corner, spraycan grafitti derives a counterculture noticeboard from this most forbidding of state-constructed structures.

Downcoast at Capbreton local skateboarders dug one out, grinding tailstalls and ollie trasfers out of its rough concrete transitions.

Look on my works, ye mighty, and despair.

Next Story:
‘With Deep Regret’ (for about ten minutes): Teachers’ Resignation Letters