An unstoppable effluvium of filth and crap emanating from the heart of London.

TalkSport Radio need look no further for its next campaign slogan.

Thousands of pieces of plastic have been discovered, submerged along the river bed of the upper Thames Estuary by scientists at Royal Holloway, University of London and the Natural History Museum.

The sheer amount of plastic recovered shows there is an unseen stream of rubbish flowing through London which could be a serious threat to aquatic wildlife. The findings, published online in Marine Pollution Bulletin, highlight the cause for concern, not only for ecosystems around the river but for the North Sea, in to which the Thames flows.

Using nets designed to catch Chinese mitten crabs, Royal Holloway and the Natural History Museum scientists documented rubbish collected during a three-month trial. More than 8,000 pieces of plastic were collected, including large numbers of cigarette packaging, food wrappers and cups, but more than a fifth of waste was made up of sanitary products. 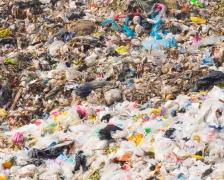 Dr Dave Morritt, a Senior Lecturer in Marine Biology at Royal Holloway and co-author of the study says: “The unusual aspect of the study is that these nets are originally designed to trap fish and crabs moving along the river bed, so we can see that the majority of this litter is hidden below the surface. This underwater litter must be taken into account when predicting the amount of pollution entering our rivers and seas, not just those items that we can see at the surface and washed up on shore. The potential impacts this could have for wildlife are far reaching: not only are the species that live in and around the river affected, but also those in seas that rivers feed into.”

The true extent of the problem is still unknown

The waste collected for the study is only a small snapshot of the volume of litter which may exist at the bottom of the Thames. Plastic bags and other large items were unlikely to get caught in the small nets so the true extent of the problem is still unknown.

Dr Paul Clark, a researcher, at the Natural History Museum and co-author of the study says: “All of this waste, which was mostly plastic, was hidden underwater so Londoners probably don’t realise that it’s there. Plastic can have a damaging impact on underwater life. Large pieces can trap animals but smaller pieces can be in advertently eaten. This litter moves up and down the river bed depending on tides.

The movement causes the pieces of plastic to break down into smaller fragments. These are small enough to be eaten by even the smallest animals, which are in turn eaten by larger fish and birds. Once digested, plastic can release toxic chemicals which are then passed through the food chain. These toxic chemicals, in high doses, could harm the health of wildlife.”

Scientists are increasingly pressing for changes to both policy and consumer behaviours, as the dangers of plastics become more apparent.