Kraftwerk Uncovered at The Science Museum

It was only natural that sooner or later, Kraftwerk would materialise in some form at the Science Museum 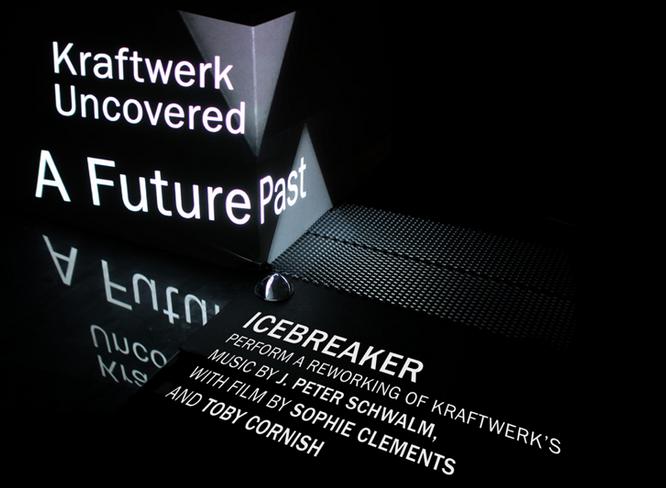 [dropcap style=”font-size:100px; color:#992211;”]K[/dropcap]raftwerk‘s aesthetics are inherently technological, if not scientific, and it’s in this context that the British public has often encountered them.

The group famously appeared on the BBC’s science programme Tomorrow’s World at the time of Autobahn and their robots appeared on the show to promote the remixed version of ‘The Robots’ in 1981.

At their little-known Norwich University show in 1992 some of the hardcore fans wore white lab coats to signify their devotion to Kraftwerk. So it was only natural that sooner or later, Kraftwerk would materialise in some form at the Science Museum, and it was especially appropriate given the continued presence of the Oramics electronic music exhibition in the museum.

carry the danger of false

of the music’s inhuman force[/quote]

Of course, had Kraftwerk themselves been playing we might have witnessed a repetition of the hype and ticketing chaos that accompanied their residency at Tate Modern.

What was actually offered was two performances interpreting Kraftwerk and two talks by David Toop and Richard Witt. Witt charmingly discussed both the ways in which the group were received in Britain and the sonic evolution of their sound. Perhaps the most surprising revelation was that on their 17 date (!) Autobahn tour, Kraftwerk played at locations around the country including… Yeovil.

He also described their bemused reaction to the Liverpool audience’s war-themed German jokes. He then traced the development of motifs that feature in their earliest and most organic works through to the classic sounds of Trans Europe Express and other key albums. Although these insights are the result of very precise musicological research, Witt communicated their relevance clearly and engagingly.

It also made an instructive coda to Icebreaker‘s Kraftwerk interpretations, performed in the museum’s IMAX theatre. This was the premiere of a reworking of Kraftwerk’s music by German composer J. Peter Schwalm with film by Sophie Clements and Toby Cornish. The work is described as ‘a purposeful departure from the dehumanised high-tech of the current Kraftwerk shows’.

This is a risky strategy as it ignores the fact that for many ‘the de-humanised aesthetic’ is a key part of Kraftwerk’s appeal. Attempts to ‘re-humanise’ electronic music always carry the danger of false humanisation and neutering of the music’s inhuman force (which leaves little space for humanistic assumptions about being able to fully control its potential).

Icebreaker is a large ensemble containing some seemingly inappropriate instrumentation, particularly sax and guitars. However, the show opens very strongly with a powerful version of ‘Heimcomputer (Home Computer)’, paradoxically it was the least organic Kraftwerk tracks that responded best to the organic treatment. The sounds were tight and dynamic and the stunning backing film introduces a noirish Fritz Lang-like aspect to the track.

This was followed by the show’s highlight, an unexpected and superbly atmospheric version of ‘megaherz/mitternacht’ (from Kraftwerk 1970 / Autobahn 1974). In this performance ‘mitternacht’ in particular sounded at least as good as the sinister original and really brought this obscure track to life. The effect was enhanced by the melancholy black and white films of Kraftwerk’s home region, the Ruhr. In fact, while the musical standard wasn’t always consistent, the visual standards were high throughout the performance.

Following this Icebreaker reverted to type, playing what could have been original contemporary compositions rather than pieces based on Tanzmusik (from 1973’s Ralf & Florian) and Radio-Activity. While it’s certainly true that Kraftwerk had roots in contemporary composition and improvisation, over-applying these stylistic approaches to their later music seems unconvincing.

‘Morgenspaziergang’ (also from Autobahn)  suffered by comparison with the original, while ‘Spiegelsaal’ (Hall of Mirrors from 1977’s Trans-Europe Express) and the first two sections of  Autobahn itself seemed to reduce the power of the originals by unnecessary diversions and stylistic departures. While the opening tracks had proved how well Icebreaker’s approach to Kraftwerk could function, these tracks re-introduced some serious doubts about its wisdom.

However, in the final, fast section of Autobahn the focus and power returned, leaving a much more positive impression of the show. Once again, the films (high-speed black and white films of the autobahn) were key to the success, to the extent that Kraftwerk might be better off replacing some of their kitschier 3D films with the work of Clements and Toby Cornish, whose conscientious engagement with Kraftwerk’s aesthetics is a near-complete success.

Icebreaker’s performance had some very memorable highlights but also gave the impression of being still work in progress, with some glitches to be ironed out on the tour, which will also feature some surprising extra numbers on the bill including  Erik Bunger’s Variation on a Theme by KC & the Sunshine Band  and re-interpretations of Michael Nyman and Barry Adamson.

The evening closed with Kraftwerk interpreters of the 1990s, the Balanescu Quartet, best-known to many for their robotic string versions of Kraftwerk classics on the album Possessed.

Performing their second show of the night on a simple temporary stage in the main gallery underneath a World War One French bi-plane and to the left of a V-2 rocket, the quartet seemed to relish playing in the museum, enjoying the acoustics and giving a more aggressive and euphoric performance than usual, reminding us just how persuasively and charmingly they interpret Kraftwerk.

Overall, this was a thought-provoking and enjoyable night at the Science Museum, which seems to cope very efficiently with live music audiences and provides a memorable concert setting.

Next Story:
What is Love? Ask a Neurologist