My main interest is still people and their inner selves hidden behind the public face. I am looking for ways to show that still vulnerable child inside. 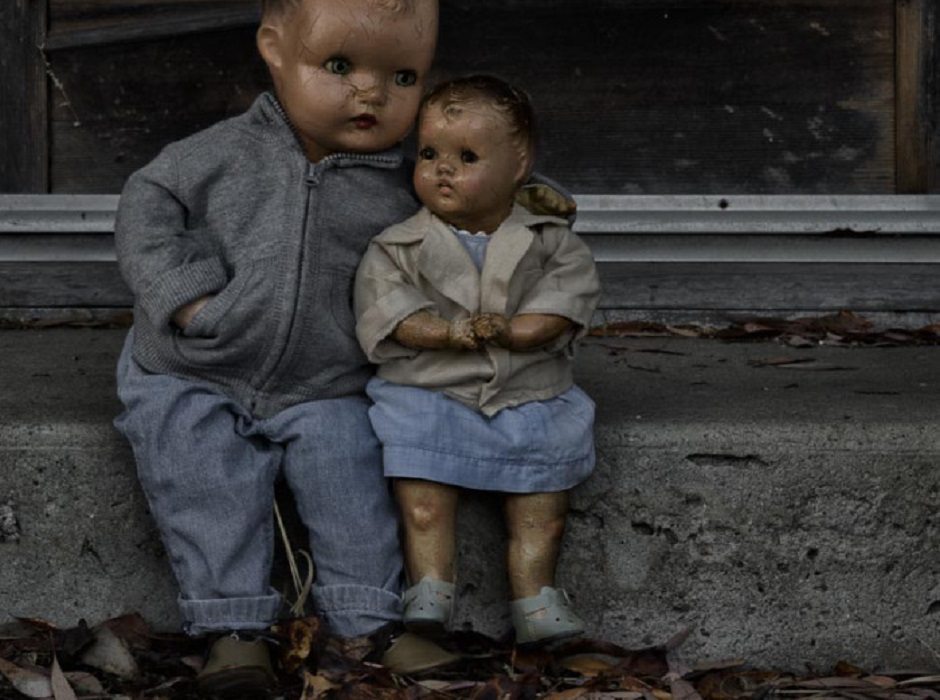 [dropcap style=”font-size:100px; color:#992211;”]’I[/dropcap] like pretty pictures as much as the next person, the immediate gratification factor is undeniable, but there are so many people who do that type of picture better than I can.

I want to use photography to express aspects of human nature that excite me.’

– Kathy Curtis Cahill, expounding upon her artistic motivations. Longing, hope and a certain amount of pain recur through Curtis Cahill’s photographic work, which she explains to Kristine Schomaker.

Tell me a little bit about yourself, about your life? What helped prepare you to become the artist that you are today?

I have always considered myself an artist. I showed an aptitude for drawing at a very young age. I was an art major in high school, and college. My first husband was an NYU film major. I began working on student films. When we moved to California from NYC, I continued to do student films at The American Film Institute. This led to work in low budget films, commercials, music videos, still photography styling, and eventually a long career in television. I have been an artist my whole life. 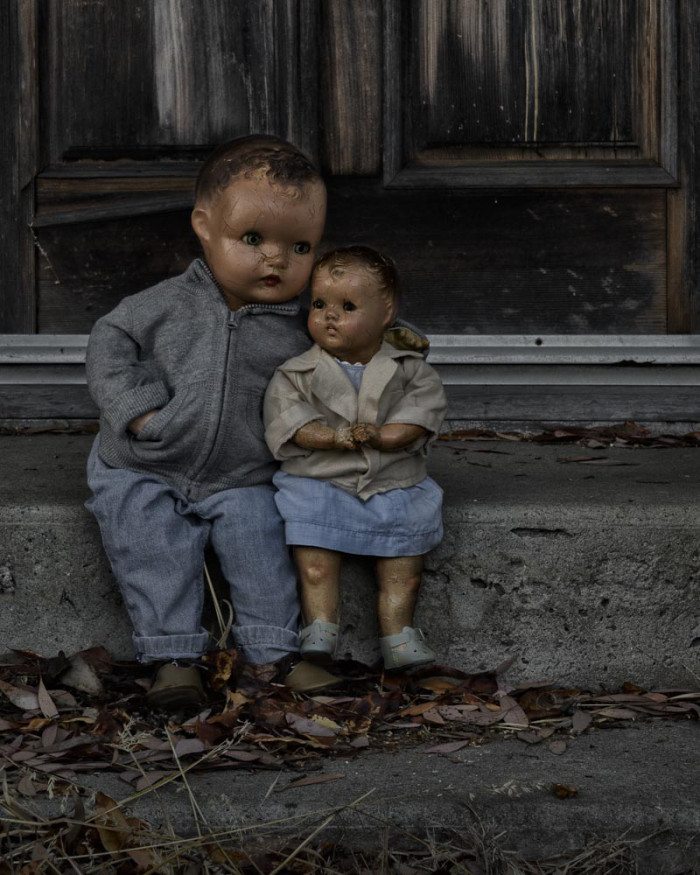 How did your time in the Film and TV industry influence you?

My time in film and television making environments for imaginary characters was a dream job. I got to make up their histories using non-verbal cues. I became a great observer of people, and how their environment tells so much about them. Shopping for articles to use in sets allowed me to “become” that character, a form of play acting I thoroughly enjoyed. This directly related to my work with these dolls, as I choose everything in the images to help tell the story.

How would you describe your artistic style?

I strive for realism with a visual hook, a different color palette, a point of view….

What message do you want to convey?

Children are not objects. They are very sensitive to their environment and to people’s moods. They hear everything, they see everything. There is no child sleeping through a fight between their parents in the middle of the night. Even though they don’t emotionally understand what’s going on, they feel helpless and afraid. And most importantly, they remember. It leaves lasting scars that affect them throughout their lives.

How would you describe your personal iconography, and is there something you can look back and see consistently in your work?

The color blue which denotes sadness, and an element of coldness is consistent. I de-saturate the colors to try to enhance the memory aspect of the image.

Can you take us through the process of composing your photographs, from start to finish?

I think of the emotion I want to portray first. Fear, sadness, anger, etc. I then shop for a doll with a face that is already somewhat expressing that emotion. 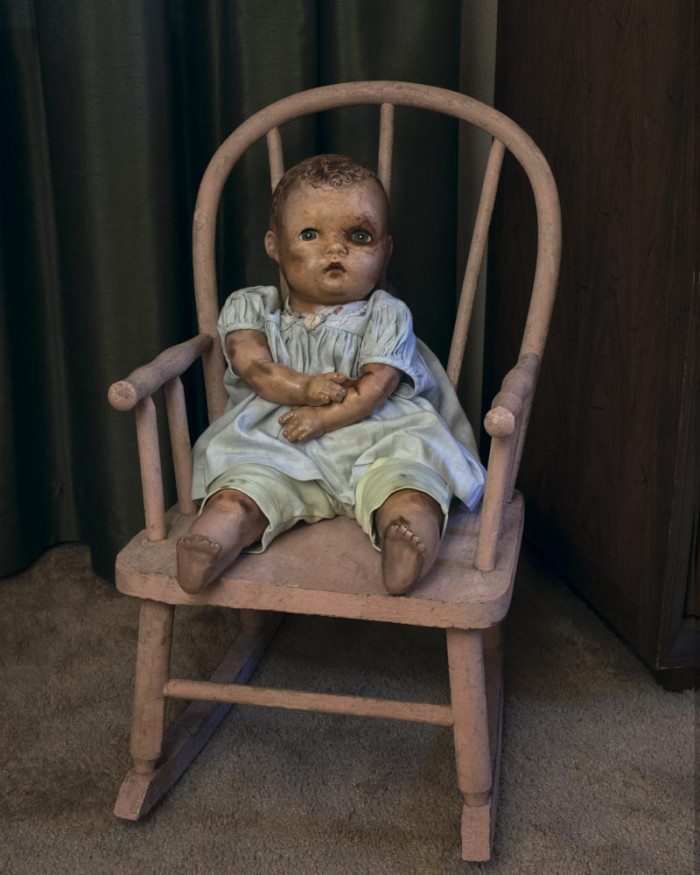 I use string, rubber bands, sticks, doll stands, pillows, and any object I need to make them stand or stay in a pose. These helpers are then removed in Photoshop. I try as much as possible to get the story in the camera.

I use a SONY a7r, on a tripod. My favorite lens is the Zeiss 24-70mm. I use natural light, and if needed, a bounce board and diffuser. It’s a simple set up I can take with me and use anywhere, although I tend to shoot in rural areas, I don’t like attracting attention. The dolls are small, but they take a long time to set up, and since I use available light, I may need to wait until the light is right.

I shoot the image until I either have it as good as I can get it, or I realize this situation isn’t going to work. Then it’s back to the drawing board.

Who/What has impacted your art the most and how does that come through?

If you mean photographers, I would say Diane Arbus and Sally Mann, especially for this collection of pictures. The pathos of the Keane kid paintings made a huge impression on me when they first appeared in the early 60”s because it was an unusual way to portray children; sad, wistful, unhappy. I understood those feelings more than the perpetually smiling children portrayed elsewhere. That was not my childhood.

Both Arbus and Mann shot children as they were, didn’t try to artificial portray them. The capturing of real expressions and real poses was my goal in these series. 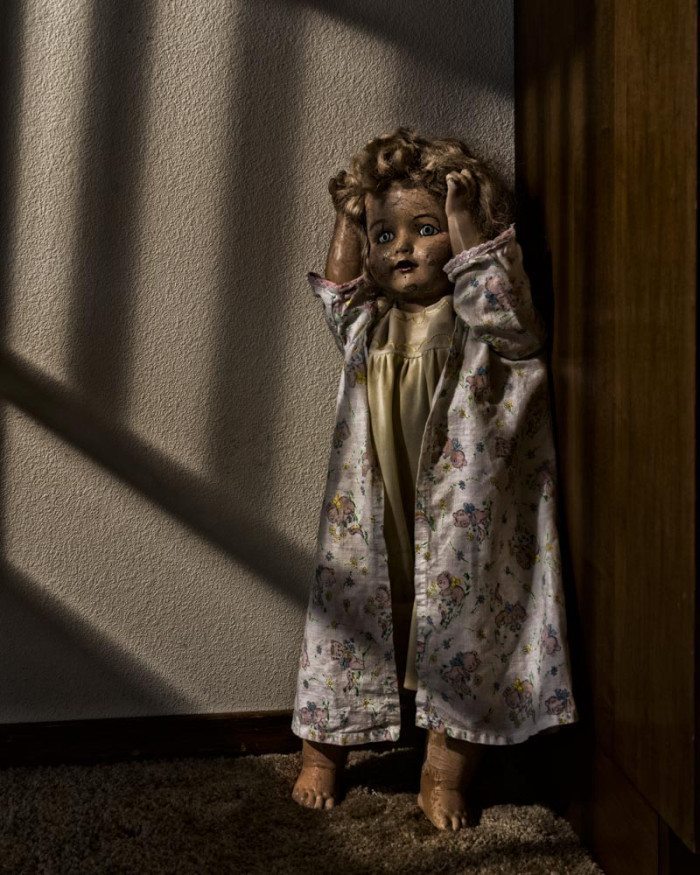 What motivates you as an artist?

I need to communicate. I like to find a commonality instead of a difference, although that commonality can be pointing out something that is painful, or produces unease.

What was the first work of art that you remember responding to?

The formal family portraits at my grandparents’ house, because they presented a “false face” rather than the real one I saw. This colorized version on my family baffled me in its meaning. Later of course, I got it.

As for Art with a capital A, that came much later as we didn’t have any art at home. I don’t remember any grade school exposure to art. When I went to Jr High, as it was called in my day, I was exposed all at once to the world of Art in Art Appreciation class. My favorites at that time were the impressionists, but all of the post modernists really. I was never one to go for the European landscape.

I do remember one Christmas, with my small allotment of money to shop for my family at the dime store JJ Newberrys, buying my mother a small ceramic figurine of the Three Muses. It seemed so white and pure and to me, beautiful. It disappeared quite quickly from the small trailer we lived in at the time, so I don’t think my Mother saw it the same way I did.

This made a different kind of impression on me concerning my need for art, and my parents’ lack of it.

Is there a theme or medium you would like to explore further in the coming years?

Many themes yes, and already have several ideas in the works. My main interest is still people and their inner selves hidden behind the public face. I am looking for ways to show that still vulnerable child inside.

Is there anything else you would like to add?

I hope people see this body of work as one that makes them aware of children’s vulnerability, and the long lasting effects of childhood trauma. Education is a powerful tool. I didn’t do this project for shock value, but to point out how important environment and adult/child interaction is in the formative years.

In closing, can you offer some thoughts about your overall goal as an artist?

To be relevant. To say something no one else is saying in quite the same way.

Previous Story:
Too Much Telly Gets Your Toddler… Bullied?!