Getting Under the Bonnet of Dot (Karmakanic)

[dropcap style=”font-size:100px; color:#992211;”]S[/dropcap]wedish prog outfit Karmakanic came into existence in Malmö back in 2002 and since then, they have been held in high regard in the progressive rock and metal communities.

Signed to predominantly prog-based label Inside Out (who boast the likes of Ayreon, Devin Townsend and many former Dream Theater member based projects), it’s a good indication of why this regard is there.

Musically, the band deliver a blend of prog rock and metal, marked by dynamic contrasts which are sharply delivered. Abstract lyrics, long instrumental sections and polyrhythmic waves litter their songs and the best way to give a rough idea is to think of Karmakanic as a blend of classic, symphonic prog rock like Yes and Genesis, but with the metallic edge of Ayreon and Symphony X.

On paper this all looks appetising. Progressive music is about pushing boundaries, merging sounds to create something wonderful and, of course, complexity, technical delivery, intricate compositions and mind blowing moments laden with flair and virtuosity. With Dot being the band’s fifth album, it can be used as a pretty good indicator of their sound and a great reference point to see if the regard is warranted.

Opening the album is the 25 minute epic “God, The Universe and everything else no one really cares about part 1”. If that isn’t a perfect statement of progressive credentials then show me what is (and for the record, please don’t fire things like Dream Theater’s “A change of seasons” or the 63 minute long track “Dopesmoker” by doom titans Sleep in my direction!).

Initially, a low volume crackling of static brings the track in before it shifts to a bright sounding melodic progression. A nice melodic piano line is joined by some swelling guitar and bass lines before it shifts into a more eerie section which brings in the vocals and an acoustic guitar. Soft sounding and with a real clarity, the vocals really stand out. Full of emotion and expression, they help paint a picture on the canvas which the music provides.

We get exotic, pseudo-Middle Eastern synth lines along with twisting melodic lead passages, building the layers and complexity of the track and giving it an almost jazz-like nature (in terms of ignoring the rule book and just going off on a musical journey for the hell of it).

With lyrics depicting some sort of creation of the universe, along with some religious overtures thrown in, it is a track which gradually draws you into it (something these long musical epics require to be listenable) and Karmakanic do it well. It flows liquidly, to the extent of having to time check where you are up to because it doesn’t drag on like some prog epics do. A distinct shift in sound and delivery occurs round the six minute mark and this pattern of distinctive musical shifts occurs periodically throughout the duration of the track. 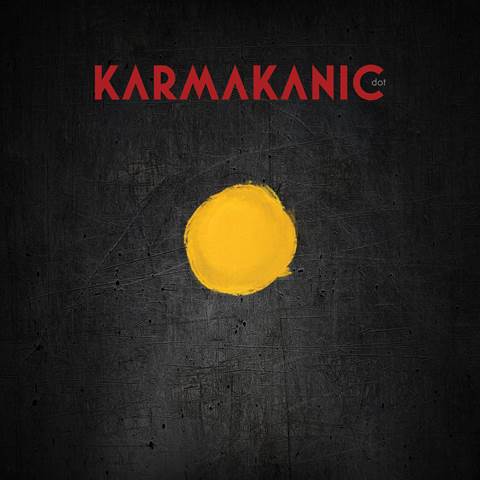 With huge symphonic overtures around the middle of the track and some of the more avant-garde inspired sprawling instrumentals, as well as multiple layered vocal sections with choir-like qualities and plenty of intricate flair displays, this does have all the hallmarks of a classic progressive rock track in the vein of Yes and Genesis. However, as impressive as some of the moments in the latter parts of the track are, they are prone to dragging on a little too much in places, stunting the growth and flow of the musical current it had been creating.

Still, the musical journey continues and if you don’t pay close attention, you won’t pick up where the tracks change. With a real fluid transition, even if it is less than five seconds of fade out and fade in, “Higher Ground” comes in. Before you get all excited, it isn’t a cover of the Stevie Wonder track. More samples come in with some warm synth ambience, giving a slight hint of Pink Floyd to the track. The bright acoustic guitar with the clean vocals begin to paint a picture with descriptive detailing. With a steady pace and building feeling, the track grows in volume, making brilliant use of the dynamics the band is known for.

Surges in the prominence of the bass give a warm but full sounding low end, whilst the layers of guitar and synths create mass. Much like ‘Time’ by Pink Floyd, it has that captivating quality to it, showing how simplistic composition can be massive and intricate in execution, but whereas the Floyd track has that iconic air about it, “Higher Ground” has more of an uplifting feel to it. That is of course, until the later stages of the track.

Once we pass the six minute mark, it takes on a metallic edge much like the recent works of Dream Theater. Growling riffs, flashy soloing and hypnotic progressions kick this track to life and give it a real power in its final run, which yet again highlights just how composition and delivery can be more effective than flashy tricks.

“Steer By The Stars” has a bright sound to it. The chorus laden arpeggios delivered cleanly really ring out, giving it a melodic hook. Acoustic guitars and bright vocals add an accessible quality for the casual listener and you get the feeling this would not seem out of place on mainstream media. As the chorus kicks in, it has a real energy to it, bringing that classic prog quality touched on earlier, with shades of Genesis and Rush in there.

Sharp with the delivery in both the music and the vocals, the track has plenty of hooks and a catchy vibe. The warm bassline is just as clear as the crisp overdriven guitars, whilst the melodic vocal layers and harmonies work really well. Hitting the bridge, it gets a slight feel of Kansas to it. Whether this is down to the boogie sequence, which has a familiar feel to ‘Carry On My Wayward Son’, or the little flashes of Hammond organ, I cannot quite place, but it works well, diverting the flow of the song, allowing the final chorus to come in with a real punch before it eventually fades out to an a capella rendition of the chorus to end, demonstrating just how great the vocals really are on this release.

“Travelling Minds” begins rather tamely, once again utilising the clean and acoustic guitars, but this time they play a backing role to the melodic and rich bass solo. As soon as the final note of the bass solo rings out, the melodic guitar lead comes in, laden with bluesy licks and soaring string bends, setting up the start of the verse nicely. With a big vocal delivery, grandoise synth, string accompaniments and intricate melodic lines, it really kicks off. With a political take, the vocals are delivered with a sting and hint of disdain, but still retain that clean delivery which really grabs the attention, making you almost miss the very powerful backing music behind it.

Again, touching on the likes of Pink Floyd and Yes, the massive sound and feel combine with melody and accessibility in the delivery, keeping the listener engaged. As it goes on, it shifts to an instrumental section punctuated by piano lines, bluesy leads and huge string and synths. These lavish details wind the track down gently, setting us up for the final track.

“God, The Universe and everything else no one really cares about part 2” closes the album and the first thing of note is that, much like the shift from track 1 to 2, the momentary silence between the previous track ending and current one starting is barely noticeable, keeping that flowing feel the album has had going right up to the last parts. Acting as a curtain call,  the track has a very summarising feel to it, drawing the lyrical and musical content into one concise package. Symphonic and grandoise arrangements give it a huge climactic feel with surges in strings, horns and bassline building the first half of the track before it surges into the final crescendo of progressive melody.

With a very Dream Theater styled sound, drawing comparison to that act’s latest album The Astonishing in terms of the musical delivery, Dot‘s closing track (don’t ask me to type it out again) rings out loud and clear. Keeping the uplifting feel running to the end whilst still radiating the clarity and dynamic aspect the band has delivered for this recording, it slowly draws to a close, leaving the track to run out into a lone piano melody before it fades out, closing Dot much like it started.

Ultimately, the praise and esteem in which Karmakanic are held is warranted. In an age where progressive music is littered with complex arrangements, intense metallic tones and bewildering lead passages, Karmakanic bring back the feel of the seventies and eighties with their focus on how it sounds rather than what components make it sound the way it does. The brief flashes of technical excellence provide some sparks, but overall, the dynamics and the arrangement and delivery really carry this album.

I do in all honesty prefer a more metallic edge to my progressive music, but this is an album which is highly accessible and easy to listen to. Containing themes about (OK, one more time…) God, The Universe and everything else no one really cares about, Karmakanic allow us to focus on what we do care about – stunning music.

Karmakanic’s Dot is released on July 22nd 2016 via Reingold Records.

Previous Story:
Could Goats be Your Next Pet? Intelligent, Loyal (and Delicious)