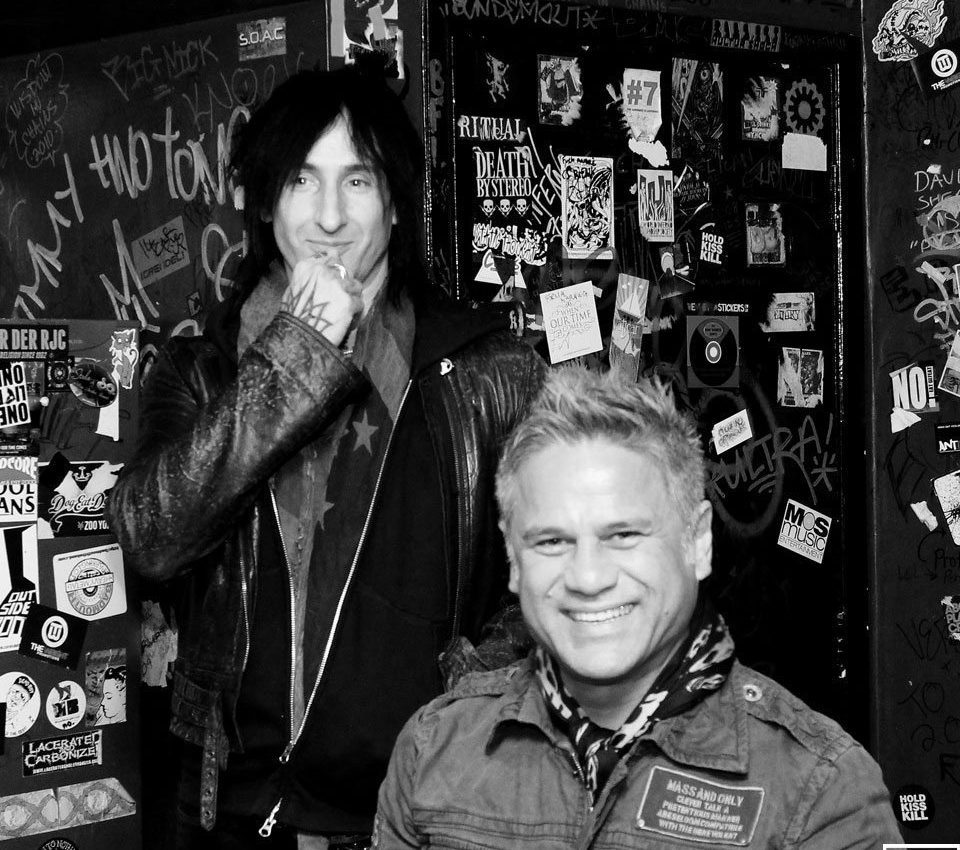 [dropcap style=”font-size:100px; color:#992211;”]T[/dropcap]he Rolling Stones, Guns and Roses (GNR), INXS, Thin Lizzy, and The Cult all have their roots in a band called The Dead Daisies.

Really? Not quite. However there are some very notable alumni from those bands in a group which, despite being laden with antecedents and the RnR epithet ‘supergroup’, have managed to keep it legit. With a collective age well over a thousand and a shared discography well into the millions it’s hard to fault them on any area of their endeavour. They look good, sound good, and are damn nice with it, but there’s a nag.

Does the lack of a ‘hard working band earning nothing’ band history matter? With a touring line up consisting of Jon Stevens (Noiseworks, INXS), Richard Fortus (GNR), Darryl Jones (The Rolling Stones), Charley Drayton (The Cult), David Lowry (Mink) and Dizzy Reed (GNR) the sheer weight of musical history at times threatens to stomp reality into the dust.

The backstory of millionaire mall tycoon Lowry (né Westfield) wanting to refocus on rock and hooking up with the famous Stevens to write an album isn’t really the sort of thing that backwater teens with rock dreams have much emotional access to. Compound that with a thrown together backing group of genuine musical legends and, let’s face it, it’s fucking weird.

If the music rocks does it matter?

Not to their growing numbers of fans, or to any of the people who managed to a get a ticket to their sell-out Underworld show (London, November 2013).

What then are we seeing here and what can you really expect from the Dead Daisies?

And what to ask Jon Stevens, a Kiwi singer whose career stretches back to the 70s and who wrote the 2000 Sydney Olympic song, and Richard Fortus whose memorable stints in both Psychedelic Furs and GNR help usher the respective bands from old glories to maturity.

What would I be able to ask? Considering the vintage there is the possibility of being stuck in the room with two self-important pricks for a half hour of sober post-therapy justification; rock and retirement, dole and roll?

So with a palpable sense of relief I watched a phenomenal soundcheck played loud, some egoless joking, and a general amiable tone. Better yet, I saw a band looking forward.

Ears ringing we sat down in the small back room of the Underworld surrounded by stickers, myspace suffixes and enthusiastic, if optimistic, descriptions of genitalia (surely the ground zero setting of rock) to get behind the music and into the shit.

Jon Stevens: The first song we wrote was ‘Man Overboard’ and then we came up with half a dozen songs in the first day, so there was definite chemistry. We just pursued that avenue, the song writing thing, and then recorded them and then the band. Charlie Drayton joined up with us and Charlie brought in Richard, and Richard brought in Dizzy… and it was just awesome, you know?

Trebuchet: The line up is pretty heavyweight, you all are very well known. How did this solution come about? Did you throw some serious money at it or, as you say, was it a gathering of friends?

Richard Fortus: (Laughs) Whenever I get the chance to work with Charlie on something I jump at it, and then once we heard the music it was just (makes expansive gestures with hands)… any chance to play with great musicians and do something we love is fun.

Did you record the album with this band?

Jon Stevens: No. But actually we’ve been recording. We actually we’re written a bunch of songs and we’ll be playing three of them tonight. 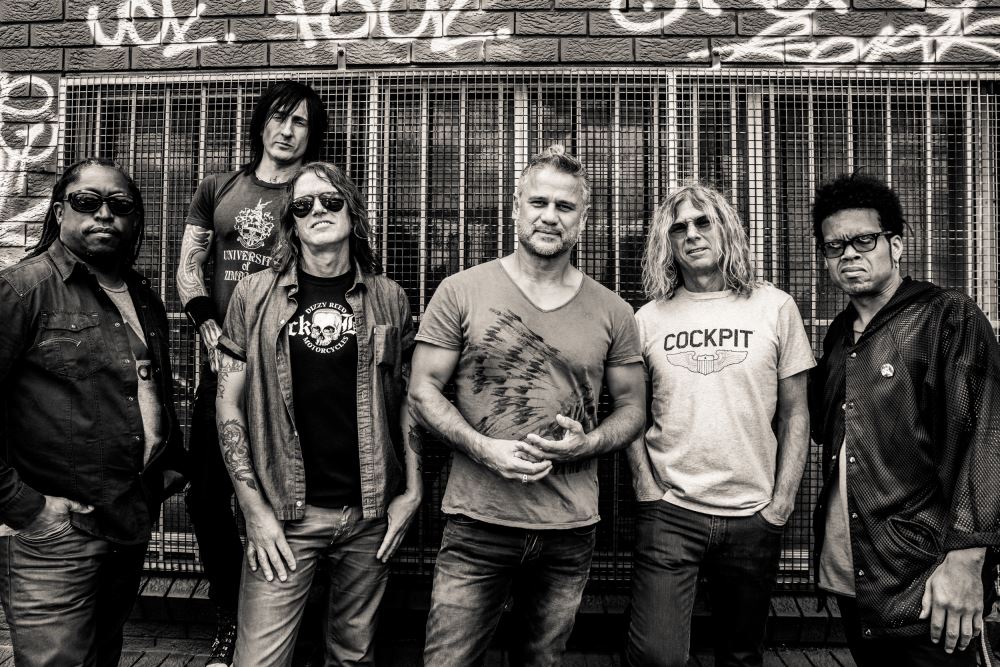 So this is definitely more than a side project.

Jon Stevens: We’re definitely a real band. When everyone came together the spirit of it was just awesome, great, natural and respectful. We’ve all got day jobs I suppose, as much as we can call it that, because it’s just great to be in a band.

But these are your songs.

Jon Stevens: Yeah but a song’s a song. A song is vehicle to give power and sing it with attitude and all that goes along with it.

That’s a pretty Zen way of looking at it.

Jon Stevens: I’m not precious about my own stuff. I’ll play or sing something and then someone else will come in with something and it’ll just grow and then all of sudden boom.

Fortus: Also the new songs we’re all writing together. The album was just Jon and David previously.

To what extent are you doing something different in this band than you’ve done in your other bands (Fortus and Stevens play in GNR and Noiseworks)?

Fortus: They’re both very different bands and you bring to each bands what works with those people. It’s a different group of people and Jon’s a very different singer to Axl, he’s much louder.

Is it more collaborative in Dead Daisies?

Fortus: …and that was just on our off days. It sounds like the bands coming together almost too easily.

Fortus: (laughs) yeah it is.

Stevens: When you get people that are this well versed in the art of music and touring etc, we just end up having fun and I think that rubs off on the creative aspect too. It’s not a chore, it’s like: ‘Oh yeah, what’ve you got, and you got, and you got?’ It’s a total collaboration, there’s not one dude going ‘no it has to be this way’. We’re like, ‘ok lets try this and see where it goes’.

Fortus: No one is precious about the songs so that makes it very easy.

What about this band feels like the first band you’re in, and what feels like it’s progressed, ‘mature’ even?

Fortus: For a band like this is think that there is a lot to be said for not over correcting things and letting songs breathe the way they should, not putting them onto a grid.

You’ve been playing songs on the road and watched them mature, so how do you know when a song is ready to record?

Stevens: Before we recorded them most of the songs were just played on acoustic guitar so everything is just built around it. For me anyway if you can play it and sing it – cool.

Fortus: To be honest for this group it’s not like we were playing these songs out live and then we recorded them, and there is a good and a bad side to that. When you do that you get stuck in your ruts and you start to play in a certain way over and over again, but then it also develops.

But then there is something magical about the first time a song comes together as a complete song and we managed to be able to capture that with the songs we just did. We captured that in the studio right then and there as we recorded them.

Stevens: Which was when we were on tour too, the nucleus was really well oiled.

Fortus: Right, so as soon it as came together were able to capture it, which is what made it cool.

compels you, you gotta

get it out otherwise

What is it about classic rock that still attracts listeners?

Fortus: I don’t know if it is nostalgia based, whether we reconnecting with something from people’s (and our) youths. Or if it’s just really exciting. I don’t know. Really, it’s hard to say. I mean that’s what we grew up on.

Fortus: I do go see a lot of bands and I am always listening to new bands.

Stevens: I really love the Graveltones that are playing with us tonight. I didn’t realise they were on the bill so it’s a great surprise.

Stevens: I’ve been listening to whatever my kids play… a lot of rap and Kendrick Lamarr. Other than that I’ve just been playing my own shit.

How have you remained rock stars for so long and not burnt out?

Stevens: ‘Rock star’ is a word that other people use. I don’t consider myself a rock star. Writing and performing and all that stuff is my job and I love all that stuff anyway, so I have to resign myself to playing music for the rest of my life… which ain’t bad!

I’m always chasing that new idea, that’s the drug for me and has been since I was a little kid. I saw myself playing music when I was 80, like the old blues guys. So I don’t wanna be a rock star. I don’t know what that is.

Fortus: I do. (laughter) I’ve worked with a few.

How about you then?

Fortus: I don’t consider myself a rock star, I just work with them. 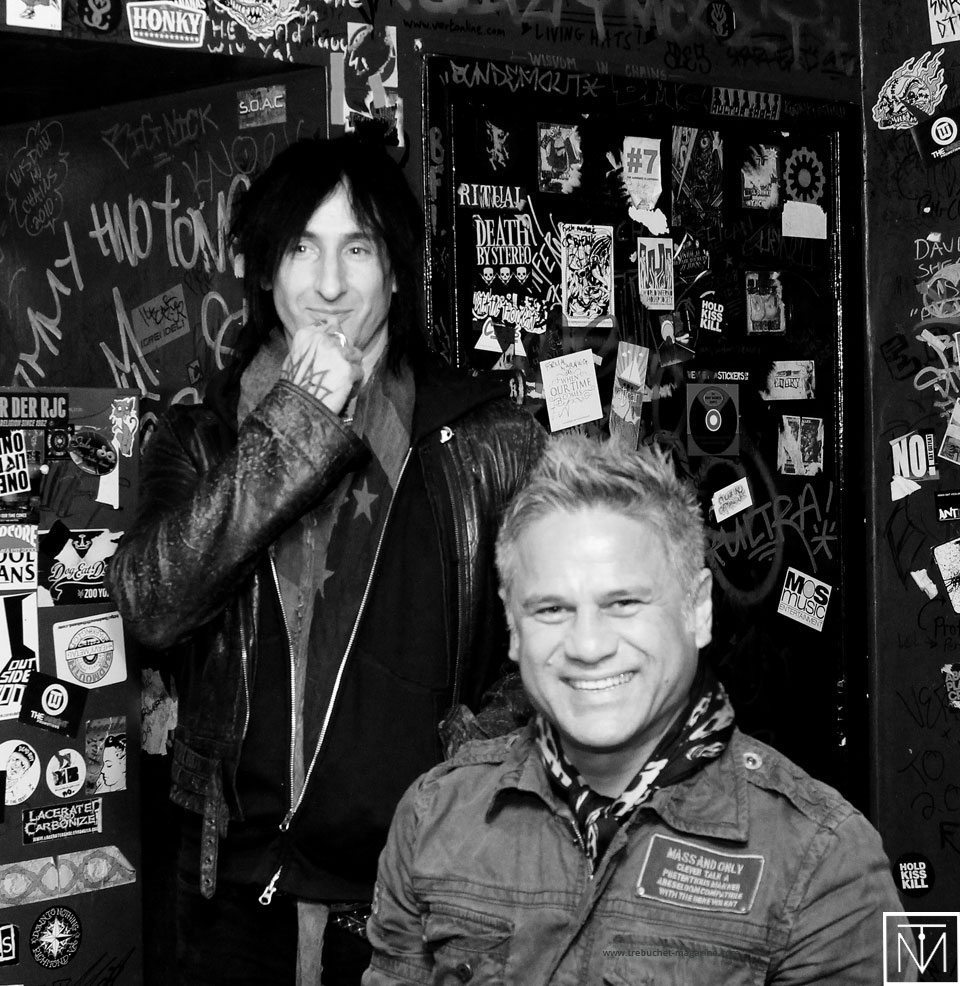 How is it that some people don’t just keep on going but still have that fire in their performance?

Fortus: (pause) I think when you don’t have it you should stop… but as long as you still get off on it.

Stevens: It’s the music that compels you, you gotta get it out otherwise it’ll drive you nuts.

Like me, the reader will probably wonder what lay between the lines in some of the answers: a tease, a joke at my expense, or perhaps more about what goes on in the ‘day jobs’.  Watching their performance later on there was an obvious sense of privilege about the chance to see professionals like these up close, scarcity breeding demand, but perhaps more significantly we witnessed the shape of things to come; where classic rock becomes boutique.

Like classic jazz players we may see line-ups like the Dead Daisies, who in the final estimation are really playing for themselves and the love of playing more than through any desire to change the world or even make personal statements, playing nuanced shows for connoisseurs rather than a generational audience seeking accompaniment.

Rather than the damning criticism that that statement might be, there is something honest and elevated about a celebration of the rock music as an art form and not necessarily a hyperbole-driven package.

For your consideration: The Dead Daisies.