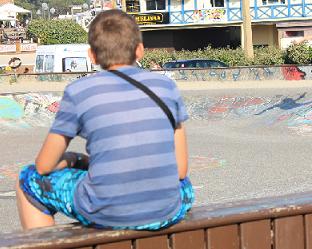 [dropcap style=”font-size:100px; color:#992211;”]C[/dropcap]hildren who overestimate their popularity are less likely to be bullies.

But… more likely to be the type of insufferable brat who thinks they’re more popular than they are?

Children who overestimate their popularity are less likely to be bullies than those who underestimate or hold more accurate assessments of their social standing, finds new research to be presented at the 108th Annual Meeting of the American Sociological Association.

“The more kids overestimated their popularity, the less aggression they displayed,” said Jennifer Watling Neal, an assistant professor of psychology at Michigan State University. “This means that kids who were more accurate in their assessment of their number of friends or who underestimated their quantity of friends compared to peer report were more aggressive.”

Past research has suggested that children who believe they are more competent or well liked than their peers or teachers view them are more aggressive. “But our research suggests there are certain types of positive perceptual biases that have a ‘bright side,'” said Neal, who co-authored the study with Elise Cappella, an assistant professor of applied psychology at New York University. “When kids say they have more friends than their peers say they have, those children are actually less aggressive.”

This finding was true for both overtly (e.g., hitting, kicking, or threatening to beat up others) and relationally (e.g., excluding others or spreading rumors) aggressive behavior.

The study relied on a survey of 421, mostly African American, second through fourth graders from five public elementary schools in an urban midwestern city. The survey, which was administered in individual classrooms, provided students with the opportunity to identify their friends and the friends of their peers in the class in which they were surveyed. Students also identified classmates who were bullies.

“Children who overestimated their popularity compared to peer report were less likely to be nominated by their peers as overtly or relationally aggressive,” Neal said.

The researchers said there could be several reasons why students who overestimate their popularity do not feel the need to bully others. “Kids who overestimate their social connections may also perceive that more peers are watching and judging their behaviors,” Neal said. “Children may be less likely to engage in aggressive behaviors that may be observed by, and place into jeopardy, their perceived social connections.”

Another possible reason is that students who overestimate their social connections may be nice, sociable kids who believe they are friends with everyone. “On the other hand, aggressive children — especially those who use forms of aggression such as rumor spreading — may be more exclusive in who they report as their friends, leading to less overestimation,” Neal said.

As for why some students overestimate their social connections, Neal said, “Kids naturally vary in their ability to accurately perceive classroom social connections and their own social positions in the classroom. It’s not surprising that some children think they have a lot more friends than they actually do.”