Wesley keeps a foot in both the singer-songwriter and guitar hero camps, and the songs are far more than mere vehicles for guitar pyrotechnics. 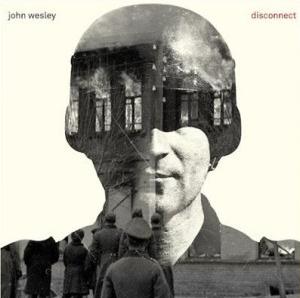 [dropcap style=”font-size:100px; color:#992211;”]J[/dropcap]ohn Wesley is probably best known as the touring guitarist for Porcupine Tree, and before that as a sideman for Fish.

But he’s also had a parallel career as a singer-songwriter, and Disconnect is his latest album.

There’s little of Porcupine Tree’s Floydian atmospherics on offer here, this is more an album of guitar-shredding psychedelic hard rock. While it’s the noisy in-your-face guitars that immediately grab your attention, repeated listens reveal there’s some solid songwriting there too.

Wesley keeps a foot in both the singer-songwriter and guitar hero camps, and the songs are far more than mere vehicles for guitar pyrotechnics. While he’s a better guitarist than he is a singer, the vocals are strong enough that it doesn’t suffer from the sort of weak vocals that let down many albums by guitarists-turned-singers. This record isn’t short of understated melody.

But ultimately this is still a guitarist’s album, and his playing is raw and visceral. There are occasional hints of Richard Thompsons’ style of electric folk-rock on one or two tracks, in other places there’ some of Neil Young style of dirty amplifier-destroying distortion. His fluid soloing avoids clichéd blues or prog styles. It’s not quite all played on ELEVEN; while it is a loud, noisy record, there are also moments of delicacy and enough dynamics to avoid things becoming too one-dimensional.

Other contributing musicians are the rhythm section of Patrick Bettison on bass and Mark Prator on drums, and a couple of solos from guitarist Dean Tidy. They are no keys, although the multiple layers of guitars would need more than a basic power trio to reproduce live.

Highlights include “Any Old Saint” with its face-melting riff, anthemic chorus, lengthy solo and delicate outtro;  the driving riff of “Once a Warrior”; and the blues-flavoured ballad “Mary Will” with some very Robin Trower-like guitar tones. But there isn’t really any filler on this record.

If you like your guitars loud and dirty as well expertly-played, then this record is strongly recommended.

Next Story:
March from Jarrow for the NHS