If you were to ask a Europhobic, UKIP-voting, Classic FM listener to define the embodiment of sonic evil, Music from Computer would have to be near the top of the list. 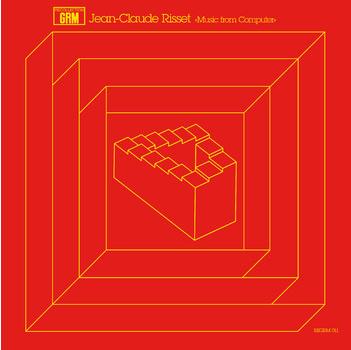 even worse, partly state-subsidised. Such people would probably be far more horrified by the thought of their children being exposed to such European electronic horror than to Satanic metal or gangsta rap.

Risset is a theoretical pioneer, creator of the Risset scale or Shepard-Risset glissando, a method which produces the illusion of a infinitely descending or ascending scale. He also developed a technique to simulate suggestions of an infinitely increasing or decreasing tempo.

His works are based on highly complex techniques and advanced research, yet they are less dry and unforgiving than that implies.

The post-imperial French state has much to answer for, but it has been an enlightened patron of electronic music. Risset’s 1985 work ‘Sud’ was commissioned by the French Ministry of Culture, which would make it suspect to some on the left as well as the right, but its power as music to make you think is undeniable. It’s a blend of processed sounds recorded in the Massif des Calanques and synthesised sounds produced in Marseille.

Opening with birdsong and other recorded sounds, the work gradually becomes more and more abstract and “unnatural”. Over its 23 minute-plus duration, it calls into question the division between “natural” and “unnatural” sounds (as electronic sounds are made to seem natural and vice-versa). Around four minutes in, there’s the first infinitely accelerating sequence, followed by bell-like clangs and a return to (more or less) natural sounds.

Even in a short sub-section there’s a rich range of sonic material. Elsewhere, distant sounds that could be processed thunder or something entirely synthetic rumble ominously. After further pacific interludes and detours, a section marked by aggressive, if not dystopic, swooping sounds forces its way through before slowing down once more and venturing into even stranger sonic territory.

‘Mutations’ ambitiously ‘attempts to explore (particularly within the harmonic order) some of the possibilities offered by the computer to compose at the very level of sound – to compose sound itself, so to speak.’ In the opening section there’s a sinister/magical atmosphere, a kind of ‘institutional ethereal’ that is increasingly disrupted by sped-up and shredded drum sounds, and various less-identifiable sounds. From 5.40 on there’s an acceleration that sounds like a rave crescendo, later cut through by clangs and deeper engine throbs. The infinitely-ascending scale gets higher and more ghostly, colder sequences cut across it.

At just over ten minutes, it feels like an epic journey that ends very cleanly with a final dramatic impact and a brief, ghostly, aftermath.

1968’s three-part ‘Computer Suite From Little Boy’ was one of the first purely computer-produced works, but also incorporates musical elements alongside pure synthesis. ‘Flight & Countdown’ is cold, ominous and formal, despite the treated jazz sequences. Following this, alarm or system sounds come to the fore, producing a dystopian futurist atmosphere typical of the period.

‘Fall’ is even more relentlessly cold and synthetic. A simple characterisation of this for contemporary listeners would be ‘dying rave chords on life support’. Interestingly, the first descending scale actually does seem to reach an end but is soon replaced by an even more dramatic sequence that eventually fades into an icy Radiophonic wind.

The closing ‘Contra-Apotheosis’ again features modernist, experimental jazz elements, but these are once more overtaken by a multi-layered electronic smog and a nightmarish crescendo that ebbs into an uncanny final section.

Overall, these are historic and serious works, thrilling but unacknowledged precedents for many of the textures that structure electronic music in the present day.