The degraded space shown in Francis’ work appears aged, as the layered scenes hang on the canvas, caught in motion, peeling with time and abrasive in action. 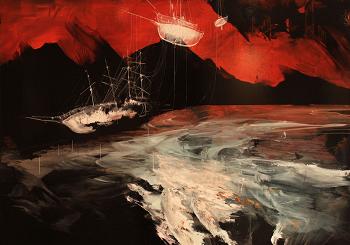 Ian Francis‘ work is so conventional it barely registers as novel, unique or exemplary through our media addled senses. There are no obvious hooks or claims to spatial nouveau in Francis’ work and, being grossly unpretentious, it is an affront to sensibilities dulled by the pastiche-crazy London scene. Why then does it run so deep?

The degraded space shown in Francis’ work appears aged, as the layered scenes hang on the canvas, caught in motion, peeling with time and abrasive in action. These overlays of texture remind the viewer of Debord’s sandpaper bound memoires – destroying ones neighbours, but creating something reductive and insightful in the process. The use of realistic elements amongst the visible brushwork captivates and makes 10,000 years from Now one of the most convincing and moving exhibitions of the year so far.

Looking at how the red perspective lines in ‘The OC’, tracing a submerged perspective, grab the viewer’s attention and using negative space push the gaze away from the party and into the ghostly bungalow (which in turn mirrors the actors) reveals the one of keys to the exhibition. How the contextual use of preoccupied perspective mirrors the central figures, all of whom are casually aware but pointedly ignoring each other, is very telling. Moreover, just as their attention is seemingly affected by some emptiness so is ours. In ‘The OC’ the actors are physically engaged with each other, their bodies turned towards the centre of the group, but their faces are preoccupied elsewhere. Roger Waters wrote a treatise on diversion called Amused to Death, there are parallels. 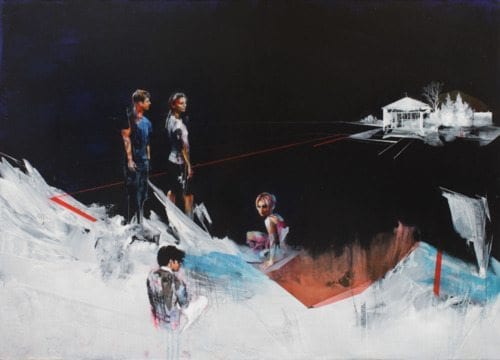 What then are we to make of the title both of the show and of the work? Time and ‘geology’, both asserted in the shows accompanying literature, make our lives less relevant on our own terms and more universally orientated. The OC, and much of California is a site of major geological events (Four days before the exhibition opened Orange County experienced an earthquake) and 10, 000 Years makes a major earthquake in the area more or less a certainty. The chaos of the white space, at once reminiscent of a digital glitch in a recorded, moment suggests some sort of obliterating natural process. A theme also present in ‘Red Sphere’ with its Tsunami-like waves obscuring the buildings, and monumentally threatening overtones.

Of course, the main event of ‘Red Sphere’ is predictably the red sphere. Here Francis seems to bend the perspective of the viewer reminiscent of how large celestial bodies bend light the red sphere bends the gaze like a distorting fish-eye lens. The fantasy of the naked courtesan on the right and the tower block on the left are eclipsed by the sunlike object. Is it a sun masked by volcanic smoke? Is it a weird red shape made surreal by some other process? It’s a mystery. 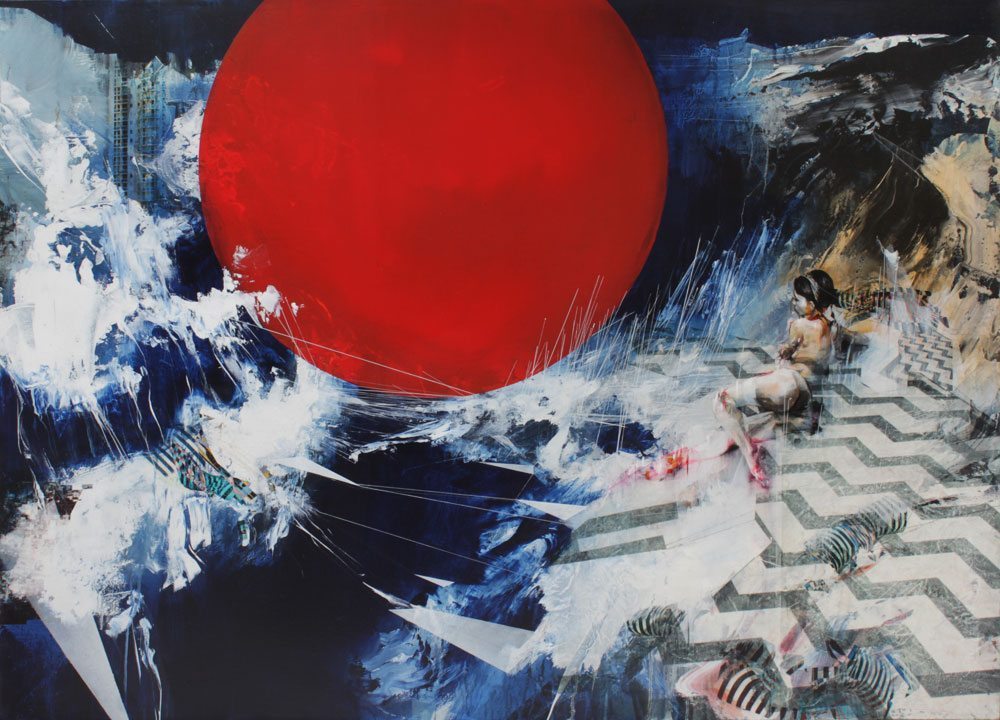 To my mind the most satisfying work (of a fantastic series) is ‘A Wrecked Ship’s Soul Ascends’ (see sidebar image). The three boats shown at different levels suggest the entropic passage of time seen from a dry sea bed, reversed. The line of their ascent/descent forms a powerful curve of mature artistry, the rationale behind the narrative of why the boat is reduced or elevated (depending on your philosophical bent) to universal ontology; things are in the process of un/becoming. Humanity is less important than the products it creates and consumers, which arguably is a pretty negative assessment, though intense and beautiful.

When Francis treats human scenes, as in ‘A girl commits (fake) suicide with a raygun’, his worldview appears less melancholic and more straight ahead bleak. The static vacuousness and surface banality conveys a contemplative depth, a sort of besmirched joi de vivre that becomes attractive. Beautiful; not in the complimentary way of television, not freely given, not freely revealed but to be discovered in the terms of its own medium. The perspective of a distorted photograph is the subject, the woman is the material, what might be called decorative or illustrative elements are the narrative features. 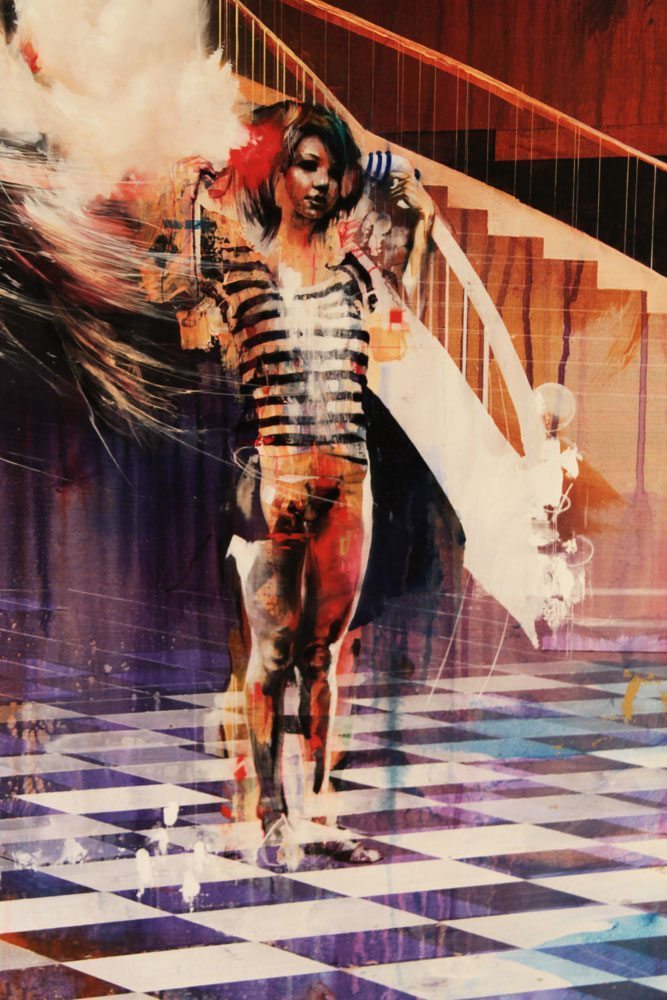 A virtual environment discovered by a dream, visually and contextually degraded by the erosion of it’s containing medium. What’s real? What is to remain from all this information that we create and comsume? These are questions that Francis wants us to consider. The danger is that in approaching these bold and big themes the result might be facile or glib.

Happily I see very little of myself or necessarily the artist in any of these paintings. There aren’t any grand statements clamouring for my attention. In fact the art itself uses the grandstanding of art, life, sex as the surface noise that over time will become washed away leaving only truth and real forms that underpin our existence and era. From this realisation one can imagine the cynic musing ‘why should there be anything left at all?’ 10,000 years from now, without our constant production, what would the fading memories say about us?