How Did You Expect to Die, and Did it Involve a Floating Hoover? (Row-Bot)

Academics at the Bristol Robotics Laboratory (BRL) have developed the Row-bot, a robot that thrives in dirty water.

[dropcap style=”font-size:100px; color:#992211;”]F[/dropcap]essing up, it did initially look as if Bristol University’s new ‘row-bot’ was little more than a floating version of those bumbling little vacuum cleaners self-ambulating around the floors of the gullible.

On closer inspection though, it’s more exciting. The thing gains energy from the debris it scoops up. It, essentially, eats!

All that worry about being made extinct by artificially intelligent googleputers, and it turns out that we’ll simply be eaten by hungry cleaner bots.

Polluted water can at times make swimming in the sea or a pool risky, on the other hand aquatic organisms such as water boatman need the nutrients in dirty water to feed on.

Taking inspiration from water beetles and other swimming insects, academics at the Bristol Robotics Laboratory (BRL) have developed the Row-bot, a robot that thrives in dirty water. The Row-bot mimics the way that the water boatman moves and the way that it feeds on rich organic matter in the dirty water it swims in.

The Row-bot project aims to develop an autonomous swimming robot able to operate indefinitely in remote unstructured locations by scavenging its energy from the environment. When it is hungry the Row-bot opens its soft robotic mouth and rows forward to fill its microbial fuel cell (MFC) stomach with nutrient-rich dirty water. It then closes its mouth and slowly digests the nutrients. The MFC stomach uses the bio-degradation of organic matter to generate electricity using bio-inspired mechanisms. When it has recharged its electrical energy stores the Row-bot rows off to a new location, ready for another gulp of dirty water. 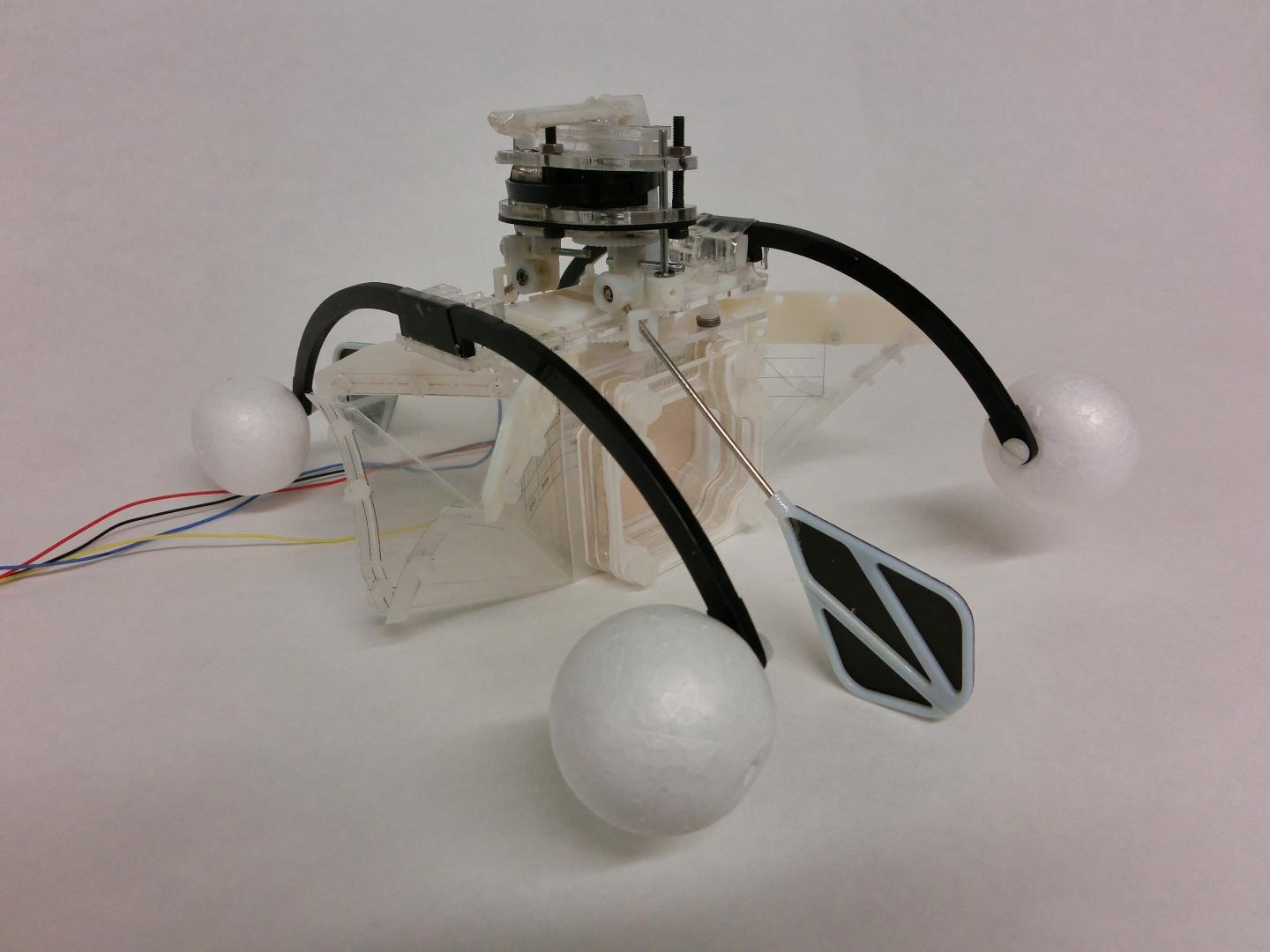 Jonathan Rossiter, Professor of Robotics at the University of Bristol and BRL, said: “The work shows a crucial step in the development of autonomous robots capable of long-term self-power. Most robots require re-charging or refuelling, often requiring human involvement.”

Hemma Philamore, PhD student, added: “We anticipate that the Row-bot will be used in environmental clean-up operations of contaminants, such as oil spills and harmful algal bloom, and in long term autonomous environmental monitoring of hazardous environments, for example those hit by natural and man-made disasters.”

The prototype robot combines two subsystems; a bioinspired energy source and bio-inspired actuation. The first subsystem shows the power generation capability of the robot. A second duplicate system starts the refuelling process and moves the robot with an energy requirement that is less than the energy generated by the first system. This is achieved by feeding on chemical energy contained in its surrounding fluid to support microbial metabolism inside the MFC.

Mimicking the water boatman’s feeding mechanism, which employs a broad beaklike mouth to sweep in both fluid and suspended particulate matter, the Row-bot feeds its MFC stomach by opening and closing the mouth-like orifice at each end of the MFC through the bending of a flexible acetate envelope structure. By using both these systems the robot can be totally independent in water providing enough energy is available in the fluid.

Next Story:
Make Better Music 79: The Art of Remixing (Part One)