Starring Dillinger Escape Plan, Architects, Funeral for a Friend, and Bouncing Souls, the third year of Hevy proves that festivals are an astounding musical democracy.

Set near the Folkestone coast Hevy fest brings the various prefixes of punk together for a weekend of righteous fun. After larger events like Sonisphere & Download it’s smaller festivals like Hevy that capture a real sense of music for the people; where distinctions between acts and audience disappear, and where it feels like the festival is yours. It’s musical Valhalla with important caveats.

the adversity of Hevy was more than met by its triumphs 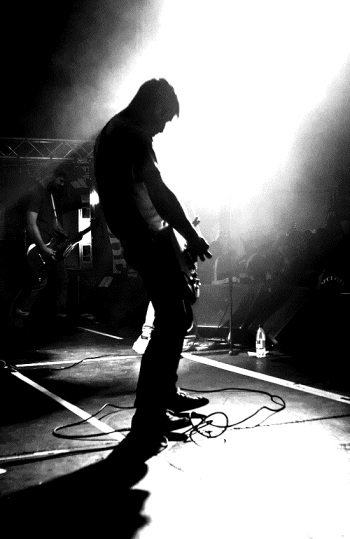 Travelling to a festival is entering a funnel of humanity. At Kings Cross you see a few people with backpacks and appropriate t-shirts and boarding the train there are a few more. Getting off at Ashford there are even more of the self-selected, and once you board the bus you’re a group. Finally you’re at the festival surrounded by everyone brought to this unlikely destination by common purpose. Objectively, festivals are a filtration of people by musical preference geographically realised and commercially catered for. But as with any gathering of people the whole is more than the sum of its parts. Each band struggles to beat the competition, to be the best, the most memorable. Here they have the chance to extend their audience beyond the scale of their year-long endeavours and become giants. Legends can be made and stars can fall. A drama set to rank toilets, exhausted beer supplies, inclement weather, travel difficulties, sponsorship, small bands winning big and big bands playing small, the adversity of Hevy was more than met by its triumphs. 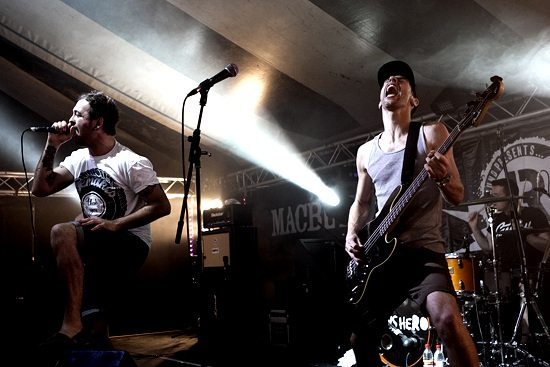 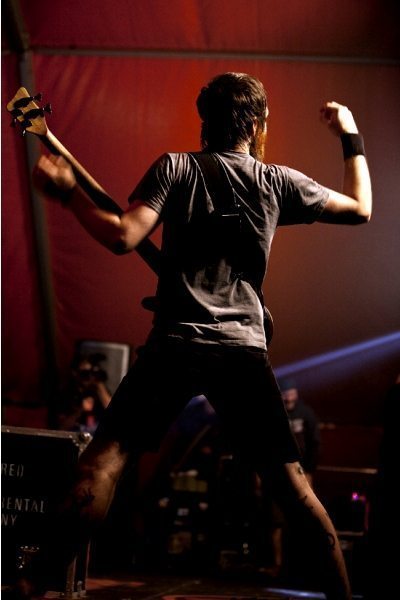 Ska-punk, hardcore punk, mathcore, metalcore, pop-punk; taking in all the various genres over the course of the festival it becomes difficult to see the similarities between the bands other than some allegiance to the word ‘punk’. Wandering around the stages band after pop-punk band seem more ridiculously commercial than the last, but perhaps they are in their element. I know that stage sponsorship is the bread and butter that allows festivals to function but there has to be a limit if only for the sake aesthetics.  Credit where it’s due; without Redbull apparently a quarter of the bands on the bill wouldn’t be able to tour, let alone pursue music as an active hobby let alone profession, and without its post-hangover properties more than half the bands (and all the journalists) wouldn’t have made it through Sunday. But still, does everything need to be branded? 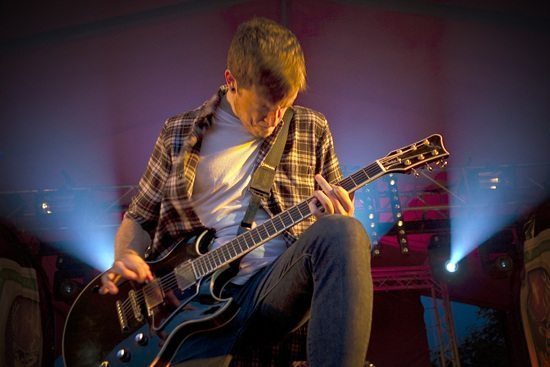 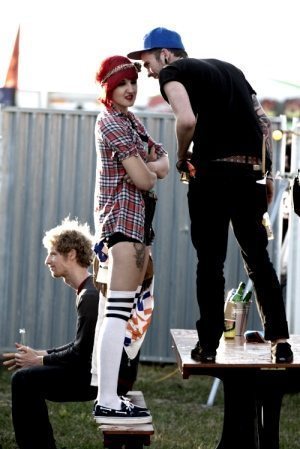 There is a point where brand presence becomes so saturated that it forms an omnipresent marketing tinnitus, constantly ringing behind every experience, and hijacking the festivals own personality. It’s impossible to see that this benefits anyone as everyone hates a corporate shill. Whether as a festival, as a band, or as a punter when a brand becomes more relevant than the thing it’s on, flick the switch people it’s time to turn on Skynet because the trend-analysts have won.

Outside of the rank commercialism associated with ‘skate-shoe punk’ two bands stand out above the rest; Hang the Bastard (HTB) and Capdown. Over headliners Dillinger Escape Plan and Architects, who played solid sets (if hampered by sound problems) the lesser known Capdown and the unknown HTB won the weekend through sheer power and charisma. 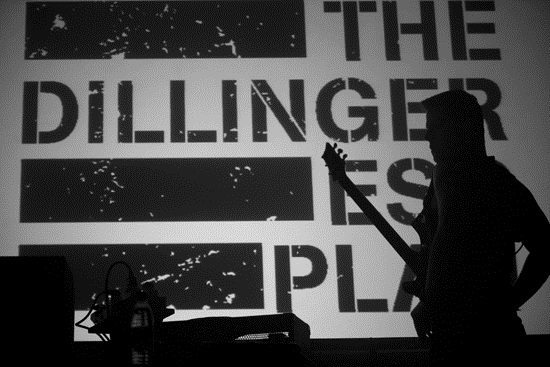 Missing their Saturday main stage slot Hang the Bastard managing the impossible by filling the smaller Macbeth tent at a bleary eyed 12.30pm and knocking it out the park with a shattering set. The doom metal riffage of guitarists Sina and Chris mixed with the hardcore awesome of Sam on vocals picked up the entire festival.  It takes a lot to make the body forget a litre of vodka and innumerable beers, watching disabled bodies stumble into large marquee and emerge half an hour later, reborn and battle ready speaks volumes for the band, their amazing set and their song writing. 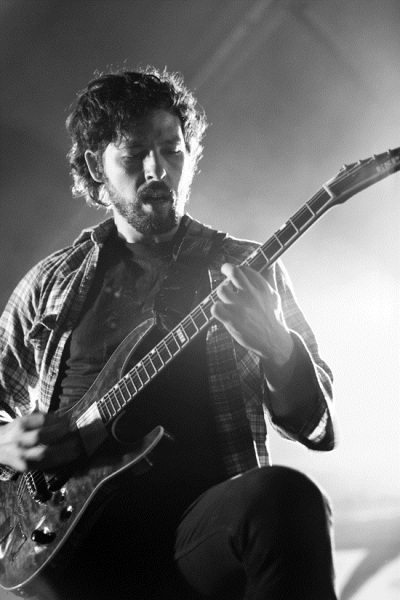 We’ve been together for a few years now so we’ve got our sound worked out. While it would have been good for to us play the mainstage, we’re glad we didn’t, the Macbeth stage definitely worked for us. Everybody was packed in tight and people seemed to really get into it.

We’ve got a very DIY ethic. We’ve always done things ourselves and after playing 4 nights a week at toilet sized venues it’s really positive for us that it’s come so far that we’re actually in a position to need some help with management. Hellfire Reign was a huge step forward for us and it’s sold pretty well.

It’s all about substance over style for us… it comes back to the punk and metal mentality, we’ve definitely got the punk ethic and attitude but over metal riffage. You know we’re not cool dudes, we don’t know everyone in the industry or anything, we don’t dress well, which I think is more of a thing with metal bands. We’ve just worked hard and that’s how we progress really. – Hang the Bastard 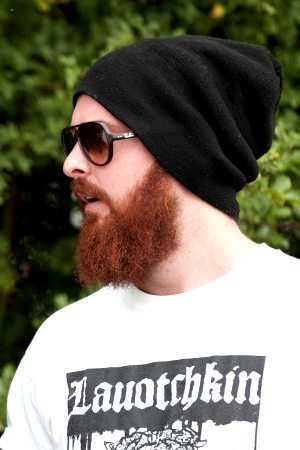 Since 2007, Hang the Bastard have played over 200 shows and with Hellfire Reign and national press praise they seem destined for big things. Half straight-edge and half hedonist their style of metalcore is starting to be recognised by the public and tour bookers alike. Before the year is out they’ll have released a split seven inch and an EP with a European tour to follow. It’s testament to their performance that throughout the rest of the day people were still talking about the band. Hearing fans ask each other ‘Were you there?’ pretty much ensures that Hang the Bastard at Hevy is on its way to becoming a legend. 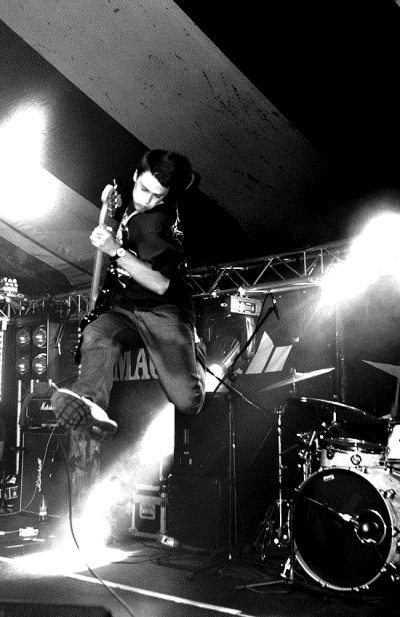 As the Sunday sun set over the festival Capdown took the main stage with more energy and verve than almost all of what preceded them. Capdown are hard to pin down, mashing vaguely experimental elements with good time punk, dub, and ska-beat topped off with politicised lyrics and saxophone by the stage friendly "Shakey" Jake Sims-Fielding. Capdown effectively prove that you can have an intense sound without being shouty or metal, arrogant or pretentious.  Capdown aren’t unassuming but neither did they make any assumptions of their audience, they laid it down tight and righteous and basically stole the show.

Capdown are in the middle of revival. Releasing material from 1997-2007 they apparently called it quits only to blast back this summer. Contrary to their estimation that they are unfashionable, old and lazy, their sheer energy and intelligence was at the brought them to the pinnacle of the festival experience. Referencing two-tone and Bad Religion (who they’ve toured with) there’s almost too much to admire about this band. Whether you are politically minded (Capdown apparently means Capitalism Down) or not here is a band that will keep you skanking through a riotous depression with a bucket load of talent, white-hot choruses, and knock-kneed humour. The message might be incendiary but as the saying goes; “if the beat’s all right they’ll dance all night” and for 45 minutes so we did. 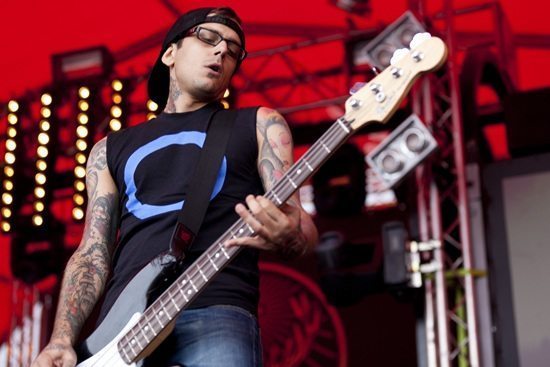 Hevy festival had its share of hiccups (running out of beer is almost inexcusable) but what made it fantastic was that it’s small enough that any band could break through and reach an audience. Over the weekend it became clear that some people bands took this on board and worked it hard where others viewed it as just another gig. More than any other festival I’ve seen this year Hevy fest succeeds as being a festival of pure heart.

Pulling back from using that most over-used adjective ‘intimate’ Hevy is the right sort of festival to really get into music. Talking to production staff, bands, bookers, punters and security there is a strong feeling of community amongst everyone that they are doing this because they love it. Long live Hevy fest see you next year! 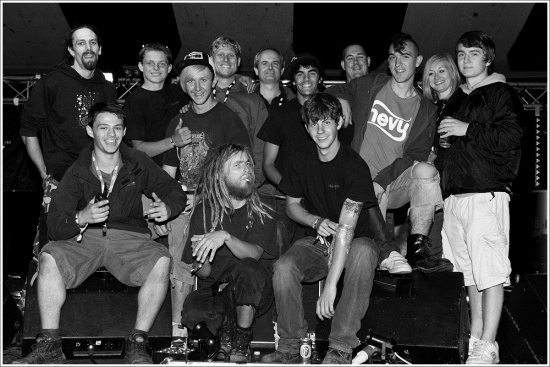 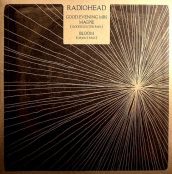 Next Story:
Into the Unknown: Radiohead – Good Evening Mrs Magpie