Helloween; Straight Out of Hell

Helloween break an extended silence with the release of Straight Out Of Hell. New album due on January 18th 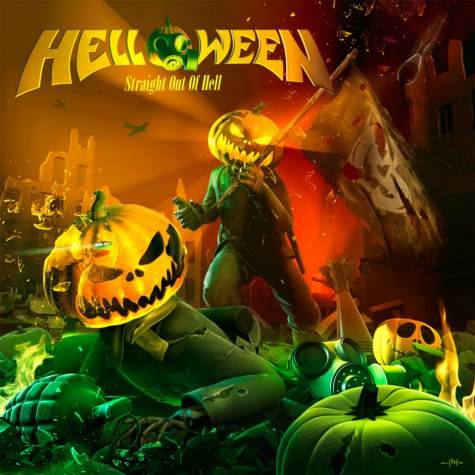 It’s been more than two years since Helloween released a new album.

No doubt about it, they are a kind of band that makes people curious what they are going to do next. Rephrase that: their fans have been chewing their own faces off waiting for some new material. Mercifully, before any more Helloween fans go full-on mentile, Straight Out of Hell is scheduled for release this week (Friday 18th January).

If you are a Helloween fan that is used to their power metal and melodies, the album is a pack of good news. Straight Out of Hell is full of their characteristic powerful riffs, speedy drumming, symphonic choruses and elaborate guitar harmonies. Yet it doesn’t end there. This time almost half of the album features a range of unexpected elements that makes it a whole lot tastier.

First off, the album starts with ‘Nabataea’ (see video). Oriental-sounding hard rock melodies, peaking in intensity at the chorus. At a later point it has got some progressive (and even psychedelic) references. Although an interesting mixture of different elements, it still has the general power you expect from Helloween. Nicely done.

‘Live Now!’ is also a very strong song, and catchy as the norovirus. In some ways, it reminds of ‘Mrs. God’. There are also stylistic parallels between ‘Waiting For The Thunder’ and ‘If I Could Fly’. If it ain’t broke, don’t fix it: those are such great Helloween hits and their hooks have obviously worked wonders before. It doesn’t do any harm to do new songs along similar lines, as the outcome is very successful. Fans are always tolerant of re-trodden ground. How they’ll take to the prog and blues elements of the album though, is something of a conundrum.

Next up is ‘Burning Sun’. It piles in with a very Iron Maiden-sounding opening section, although that soon changes. However, the song does develop a British reference, albeit a different one. Helloween have performed a version of this song with Hammond organ sound and dedicated it to the late Jon Lord. Doubtless Jon Lord would have appreciated that ‘epic’ dedication!

Yet another reference comes in ‘Wanna Be God’, a song that was inspired by Queen‘s ‘We Will Rock You’ in structure. However, the Helloween melodies add a completely different atmosphere to the song. Heavy and dark, they lend the production a satisfying Wes Craven sense of doom and dread.

‘Church Breaks Down’ pokes a stick into the hornets’ nest of Helloween fan loyalty with its surprisingly bluesy guitar solo. It is uncommon to hear such an approach from Helloween. In terms of tone and atmospherics, it makes a big difference to the feeling of the song, especially where it resolves from the chorus to the solo. The jury will be out for a long time on this one, but it works, and they should do it more often.

Helloween’s hit songs, mainly the ones with Andi Derris, are not necessarily representative of the power metal sound they created for themselves all those decades ago. In that respect, the album still offers classic Helloween songs for power metal junkies: ‘Straight Out of Hell’, ‘World of War’, ‘Years’, ‘Make Fire Catch Fly’. What marks the album though is the new musical approaches they have added and the way these combine with the classic Helloween attitude.