Despite the obvious virtuosity of the whole band there was relatively little in the way of soloing; the strength of their music is in the composition.

[dropcap style=”font-size:100px; color:#992211;”]H[/dropcap]aken are one of the best of the new generation of younger progressive rock bands producing music with all the scope, ambition and virtuosity that goes with the genre label while sounding little like any band from the 1970s.

Their third album The Mountain was a major step forward, which moved past the obvious influences (Zappa, Dream Theater) of their earlier records to develop a sound that was their own.

Support came from the four-piece My Soliloquy, with an entertaining set of highly melodic prog-metal. They made a remarkably big sound for four people, especially when they didn’t have a bassist (relying on guitarist Mike Gilpin’s riffing to fill the bottom end of the sound). Frontman Pete Morten made a strong impression both on vocals and on lead guitar. They’re a band to watch out for in the future. 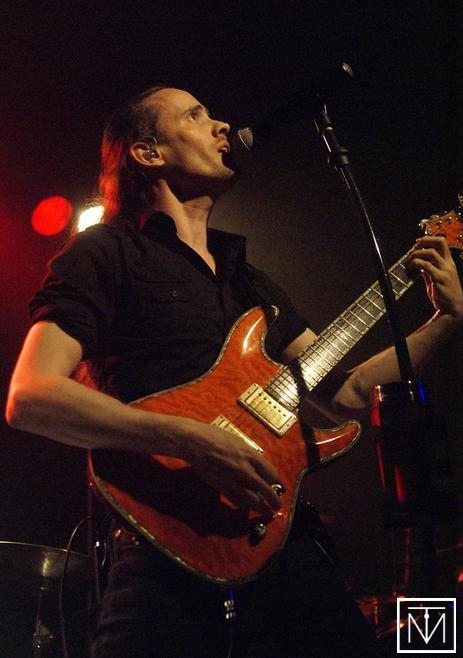 The two eight-string guitars and a six-string bass made it clear Haken were no indie band. But neither are they the sort of technically showy muso band that such things might suggest. Opening with the hymn-like but extremely earwormy “The Path”, on just piano and vocals, they proceeded to play the The Mountain in full.

[quote]a sea change in the progressive rock world[/quote]By the time they reached “Cockroach King” (with its nod to Gentle Giant) they had hit their stride. The complex material came over remarkably well live, with multi-part vocal harmonies with all six band members and the interplay between the two guitars of Richard Henshall and Charles Griffiths.

Despite the obvious virtuosity of the whole band there was relatively little in the way of soloing; the strength of their music is in the composition. The Mountain is an extremely ambitious piece that amounts to far more than the sum of its parts with its recurring motifs, huge soaring melodies and masterful use of dynamics. Frontman Ross Jennings has a fairly unique vocal style that has given rise to comparisons to Freddy Mercury with his extensive use of falsetto.

The whole thing was an intense performance from the entire band that earned huge applause when the final notes of the closing number “Somebody” died away.

After that tour-de-force they finished the show with a handful of older songs from Aquarius and Visions, encoring with the completely bonkers sixteen-minute kaleidoscopic epic “Celestial Elixir”, making a fitting end to to a fantastic night.

In the past couple of years there has been something of a sea change in the progressive rock world. The scene had been dominated by reverential homages to the 70s pioneers or flashy prog-metallers whose sound is typically dominated by instrumental pyrotechnics. Haken are one of the new breed of bands who are neither of those things. If you still think progressive rock is all about cod-Genesis 70s retreads, you should listen to Haken.

Haken will be returning on a UK tour with Leprous and Maschine in late October and early November.

Next Story:
The Sonics : KOKO