Gotthard’s new album Bang! is a bit like its title. You want Hard Rock? Bang! Fixed that for ya.

The riffs are powerful,  the  solos are clean. As is ever the case with Gotthard,  the production is crystal clear.

Steve Lee’s passing (R.I.P.) dismayed Gotthard fans, but Nic Maeder’s voice fits the band’s sound like a minced beef merkin and actually has some similarities to Lee’s vocals. Also, it must be noted, in some parts this guy will remind you of David Coverdale. Is that a good thing? Blasphemy! That’s a great thing.

Song dynamics on the album are deliciously changeable. Big riffs prompt the urge to bang some hair around, then everything quietens down. And then BOOM! A different power riff comes in. Because the song structures are not so easy to predict, the energy really blindsides you, even on the ballads. If you are one of those people who are crazy about Gotthard’s classic ballad ‘One Life One Soul’, there is a similar ballad on this album (not saying which one, you can find out for yourself)! 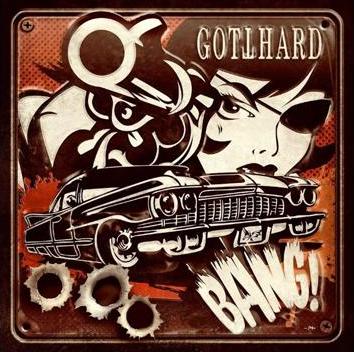 Alongside some sweet use of vocal harmonies, the guitars get some embellishment from more grandiose instrumental elements. Keys and organs, even some violins here and there. But it’s not the usual plastered-on pretentious stringwash toss; they really are natural parts of the songs and sound very organic as a whole.

The key facet of this album is the thematic diversity. Yes, you do hear some of your classic Hard Rock melodies. Some keyboards/riffs are reminiscent of Deep Purple. Some big chorus vocal harmonies are Def Leppard-y. Occasionally, you sense some Whitesnake vibes. But the moment you think it might sound familiar, the next moment proves you wrong. It’s tip-of-the-brain stuff, trying to list all the possible classic Hard Rock references for these songs, yet they stay on the right side of pastiche.

Out on April 3rd