I think it is a dreadful mistake to base your decisions on what an audience might like. Audiences are as fickle as a donkey’s tail. 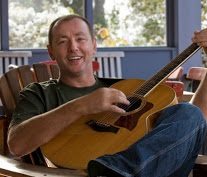 He has forged a solo career in the U.S. since relocating there

from the U.K. in the early ’90s, and his early prog-pop-art rock band It Bites continues to have a rabid following. Poet, composer, and artist Ashley Reaks says:

“As well as being a fan of Frank’s trademark in-yer-face super-fast riffing and soloing, I was always really impressed with his subtler playing, especially on the acoustic guitar. I remember visiting him in NYC in the mid-90’s and him playing me some classical guitar pieces he’d been learning and realizing what a truly gifted and dedicated guitarist he was.”

Kimberly Wright put some questions to him.

With your background in astrology, psychology, and music, and your experience in all of them, do you ever find yourself sussing out a colleague or new student using those insights?

FD: One of the first things I do when I meet anyone in any situation is find out their basic astrology. I have an app on my phone so I can very quickly have a look at who and what I’m dealing with. Understanding the other person’s perspective is amazingly useful in working situations, not just music but any time a group of people get together, and psychological astrology is a profoundly useful tool to heighten efficiency and prevent arguments.

Mikey from The Mutineers also gives guitar lessons, and he (jokingly?) said on Twitter that he can classify people by what chord they play when they pick up and guitar and start noodling around. (E = rocker, G = pop, A = boring, D = folkie, if I recall correctly). Can you similarly watch a student or new band member start in and think, “Aries, Venus in Pisces, with  commitment issues”?

FD: First of all, I agree with Mikey, I think he is absolutely correct. Secondly, I can spot certain behaviors that could be ascribed to certain energy, e.g. aggressive behavior being attributed to Aries or melancholy being a trait of Pisces. But astrology is an extremely profound subject and you cannot really know anything meaningful from just a sun sign.

Do you think there was a cosmic reason for this, or was it simply an historical coincidence?

They invented the term rock star because they all had a feeling of being special and fought to express it. They were individuals and musically none of them sounded the same. Black Sabbath, the Bee Gees, Yes, Genesis, The Who, Pink Floyd, Joni Mitchell, Neil Young… a thousand other artists who were around at the time all had their own sound.  Even the people who didn’t play music defined themselves by the bands they liked: “I’m a Genesis fan”.

What’s your approach to and philosophy of guitar solos now, versus when you were just starting out professionally?

FD: Most young guitar players starting out want to play as fast as they can, it seems to be a fundamental need in youth.  Guitar players by nature are attention seeking, and since Jimi Hendrix turned his amp up to 10 the guitar has become a dangerous instrument attracting danger-seeking types. I was exactly like this when I was a kid but now, at the ripe old age of fifty, I have gradually developed taste!

Sometimes I watch 75 year old guitar players on TV and I always think ‘you cannot play that when you are young, you have to be 75 to even know what that is’. There are secrets to all age groups who play music, invisible things that matter to the sound and feeling tones of the music.

What have been some of the most rewarding aspects of doing your living room shows? Do you think you’ll always continue to do them?

FD: Rock ‘n’ roll is not cut out for someone like me.  I am a multi-dimensional artist. I shoot film, write blogs, build websites, play electric guitar, sing and I also love to tell stories.  Rock ‘n’ roll marketing requires that you stick with the same thing over and over. If you played death metal when you were 19 then you have to continue playing death metal even when you are 60.

[quote]Michael Jackson is a prime example.

People say he was successful, but in

reality he was probably the most unsuccessful

I always had a story teller inside of me, a philosopher, a teacher and I couldn’t find an outlet for it in the arena of rock ‘n’ roll. House concerts gave me a platform in which I could be intimate with 40 or 50 people and share my life experience with them AND sing songs. House concerts have been the best musical experience of my life because I can express more of myself than I can at a rock gig.

Do you believe that the way we respond to music emotionally is innate or learned? For example, do you think music is capable of being sad, or is that  just our interpretation of it? Is it possible to raise children to believe minor chords are happy and major chords sad, or do those intervals provoke an innate reaction? If it’s innate, why do non-Western intervals (such as world music, experimental microtonal music) sound so alien to westerners and fail to produce the same emotional reaction?

FD: Obviously psychology is split down the middle on this issue. Behaviorists would say that you are simply a product of what happens to you, and the humanists say that you are born with certain innate patterns already built in. I believe it’s probably a bit of both. More than anything I believe that life is empty and meaningless and we are meaning-making machines. We make everything mean something when in fact it doesn’t mean anything. Things matter, but they don’t mean anything.

What advice do you give people who have midlife upheavals going on?

FD: I always let them know that there’s nothing wrong, it’s simply a process they are involved in. Who they think they are is getting killed by who they really are. It’s a very painful time because the role and identity that we have used for the previous 40 years is being annihilated and we have to let go of most of our current life. But there’s nothing wrong, it’s quite natural and the rewards of authenticity are waiting on the other side.

You’ve mentioned feeling soothed by Genesis during troubled times growing up. Have you ever prescribed certain genres or albums to people who are anxious, depressed, etc.? FD: I don’t use music that much in my psychology. The early Genesis music was a very personal thing. I would get lost in it. I think a lot of real Genesis fans who liked the music between 1970 and 1975 got lost in it also. Peter Gabriel has Neptune in the third house and his natural ability to have people transfixed by his stories is evident in his career. Especially very early Genesis.

As a relatively rare prog rock fan and guitarist from our generation, have you felt over the years like you had been appointed as a prog apologist? I mean, it still seems expected for young people to dismiss David Allen but love Johnny Thunders.

FD: I’m not really concerned with what people think of me. I think it is a dreadful mistake to base your decisions on what an audience might like. Audiences are as fickle as a donkey’s tail. One day you’re amazing and the next you suck. You have to have a spine and stick to your own artist and inner convictions otherwise you’ll end up terrified.

There are thousands of artists who have gotten too caught up in their public persona. It’s death by show business. Michael Jackson is a prime example. People say he was successful, but in reality he was probably the most unsuccessful artist that ever lived. He hated himself and he was frightfully inauthentic. Sure his music was fantastic, but what a failure the man was. Very sad.

There are 70 year-old men with long hair and leather jackets who have not progressed mentally or artistically since they were 19 years old. I don’t consider this a success. I would consider the band KISS a success because they know they are acting. They are not victims of show business. It’s theatre and they are making loads of cash. But other artists believe their own persona and they are the ones who suffer the most.

Success is not a static thing, you have to constantly re-create it otherwise it becomes a noose around your neck.

Previous Story:
How the Internet Loves a Fat Joke

Next Story:
Oxygen Before Life Existed. How?