Exhuming Vampires in Poland. No, REALLY! 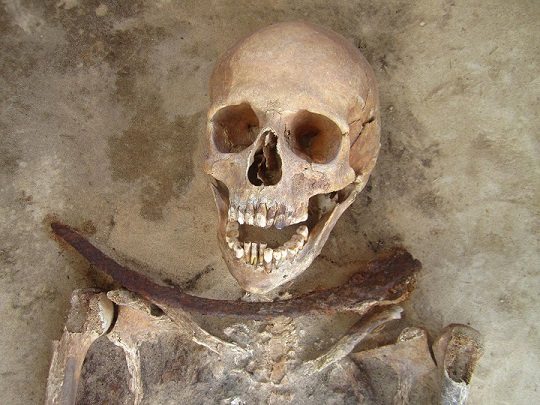 More than enough evidence for vampirism. Judgements were swifter in post-medieval Poland. Although if it were the brown trousers, you probably deserved it.

Potential ‘vampires’ buried in northwestern Poland with sickles and rocks across their bodies were likely local and not immigrants to the region, according to a study by Lesley Gregoricka from University of South Alabama and colleagues.

In northwestern Poland, apotropaic funerary rites–a traditional practice intended to prevent evil–occurred throughout the 17th-18th c. AD. Those of the dead considered at risk for becoming vampires for a variety of reasons were given specific treatment, and investigating these burial practices may provide insight into community cultural and social practices, as well as the social identities of people living in the area at the time.

Excavations at a cemetery in northwestern Poland have revealed six unusual graves, with sickles across the bodies or large rocks under the chins of select individuals, amidst hundreds of normal burials. To better understand whether the bodies selected for apotropaic burial rites were local or non-local immigrants, the authors of this study tested permanent molars from 60 individuals, including 6 “special” or deviant burials, using radiogenic strontium isotope ratios from archaeological dental enamel. They then compared the results to strontium isotopes of local animals.

The authors found that those in deviant burials seem to be a predominantly local population, with all individuals buried as potential vampires exhibiting local strontium isotope ratios. These data indicate that those targeted for apotropaic practices were not likely migrants to the region, but instead, local individuals whose social identity or manner of death likely marked them with suspicion in some other way.

The authors suggest one alternate explanation behind these apotropaic burials may be the cholera epidemics that were prevalent in Eastern Europe during the 17th century, as the first person to die from an infectious disease outbreak was presumed more likely to return from the dead as a vampire. “People of the post-medieval period did not understand how disease was spread, and rather than a scientific explanation for these epidemics, cholera and the deaths that resulted from it were explained by the supernatural – in this case, vampires,” said Dr. Gregoricka.