Active since the mid-1980s with the Industrial/EBM group Front Line Assembly and a legion of aliases and collaborations, (including Delerium, Noise Unit and Intermix), Rhys Fulber has now released his debut for Adam X’s Sonic Groove.

“Your Dystopia, My Utopia” is modular-driven blend of Techno, EBM, Industrial and synth textures that doesn’t shy away from the state of the world but doesn’t wallow in darkness either. Alexei Monroe spoke to him to discover more about his creative process, worldview and the genesis of the project.

What was your agenda for this album, and why did you release it under your under your own name and not a new or existing alias?
My other projects have always involved contributions from other people, be it vocalists or other musicians, whereas this is the first music I have released that is almost completely solitary. It seemed like finally the right time to release something under my own name. The Realism EP started out just as jams I did by myself with a modular synthesizer so this all evolved from that.

There’s an interesting contrast in the artwork between the traditional modernist architectural silhouettes and the monstrous brutalist hybrid in the centre – was architecture an inspiration for the album?
It absolutely is. The last few years I’ve become really fascinated with socialist modernist architecture as well as socialist realism art. It’s something I’ve noticed all the time I’ve spent in Europe but I just started paying more attention to it the last few years. I’ve discussed the things that I like with Janina Schütz, the cover artist, and with her being from East Germany she completely understood the aesthetic I was interested in. I grew up with all the great post punk records of the UK in the late 70s and those diagram-like designs were something on a lot of my favourite records. It was a nice way to pull a whole bunch of things together that tied in accurately with the music. 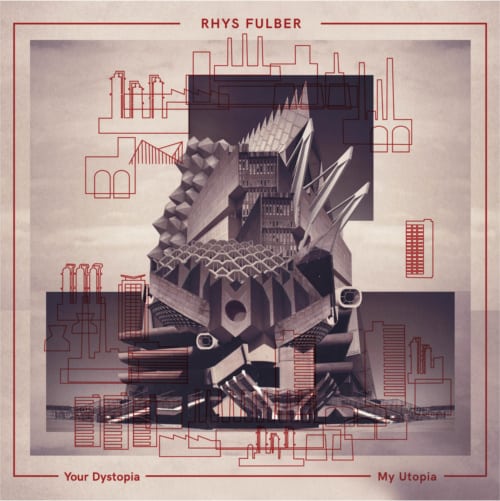 Are you still using any of the equipment used to produce early FLA and Delerium works? What was the technical basis of this album?
The early FLA records were made with fairly minimal equipment. I still have some of the key pieces, though to be honest I don’t use them as much anymore simply because they aren’t as reliable as the newer pieces I employ. Most of this record was made on my eurorack system, the core of which I’ve actually had for close to 20 years. I also started revisiting the DSP based Nord Modular I got about the same time, and it was like having something new again. It sounds fantastic and features heavily on some of the tracks.

Were all the tracks custom-made for this album? I’m interested in how you assign tracks to each of your various creative identities.
Yes. I always work project to project and it’s very rare something crosses the pre-existing boundaries I set. There is, however, a piece on the album called My Church that was almost like a remix of a track from an old project I had called Will. I’ve always thought some of those musical elements could be effective in a different context and decided to finally give it a try. It’s also one of my favourite moments on the album.

Some of the scenarios FLA once hinted at (mass hacking, information warfare, pervasive surveillance) are now part of every day reality. Is this album partly a continuation of this tradition? Are we living in an Anhedonic culture? Are you issuing warnings here?
For my solo material I feel it’s not as broad a picture. It’s more personal emotions and experiences. In a way it’s almost like talking to yourself and recording it. A lot of the sampled dialogues are things I constructed myself, and some of the titles were phrases I would write down after waking up from a dream. Anhedonia came from a little self analysis and trying to understand why in this age of technology we feel the way we do. How we are all more connected, yet more alone.

Did you see Techno’s Industrial (re)turn coming?
Not in this specific a way but I feel that most of this music has never been that dissimilar. The Industrial and EBM sounds of the 80s were the catalyst for a lot of different directions of dance music and it makes sense for things to circle back.

Which contemporary EBM/Techno crossover artists do you find most impressive?
There’s a lot of stuff I like and some of these people are my friends and I enjoy what they are doing like Adam X, Blush Response, Phase Fatale and Sarin. However, the one artist I really feel nailed the old Industrial spirit is Perc on his “Bitter Music” album. There’s an unsettling quality to some of the pieces that takes me back to the classic SPK and TG that I loved so much.

How did the connection with Sonic Groove come about? Have you been aware of their work for a while?
I had been messing around with some modular synth jams that I let my friend Joey Blush hear. He played them for Adam X (of Sonic Groove) who I had not yet met, and he expressed interest in releasing what I was doing and it pretty much evolved from there. I have been following the Techno scene for a while, especially the initial explosion of the early 90s, so I’ve always been aware of the things that were going on.

Are you generally more optimistic or pessimistic about the state of society and culture and about the future?
I wish it wasn’t this way but I have to say pessimistic. It’s almost like everything is devolving right before our very eyes and no one is doing much to stop it as it will hamper their convenience and the absurd consumer culture everyone has built up around themselves.

Are we closer to utopia or dystopia?
If you can find a way to carve peace for yourself out of the chaos around you then I would say utopia. That could be a forest or a disused building. It’s really all a matter of perspective.