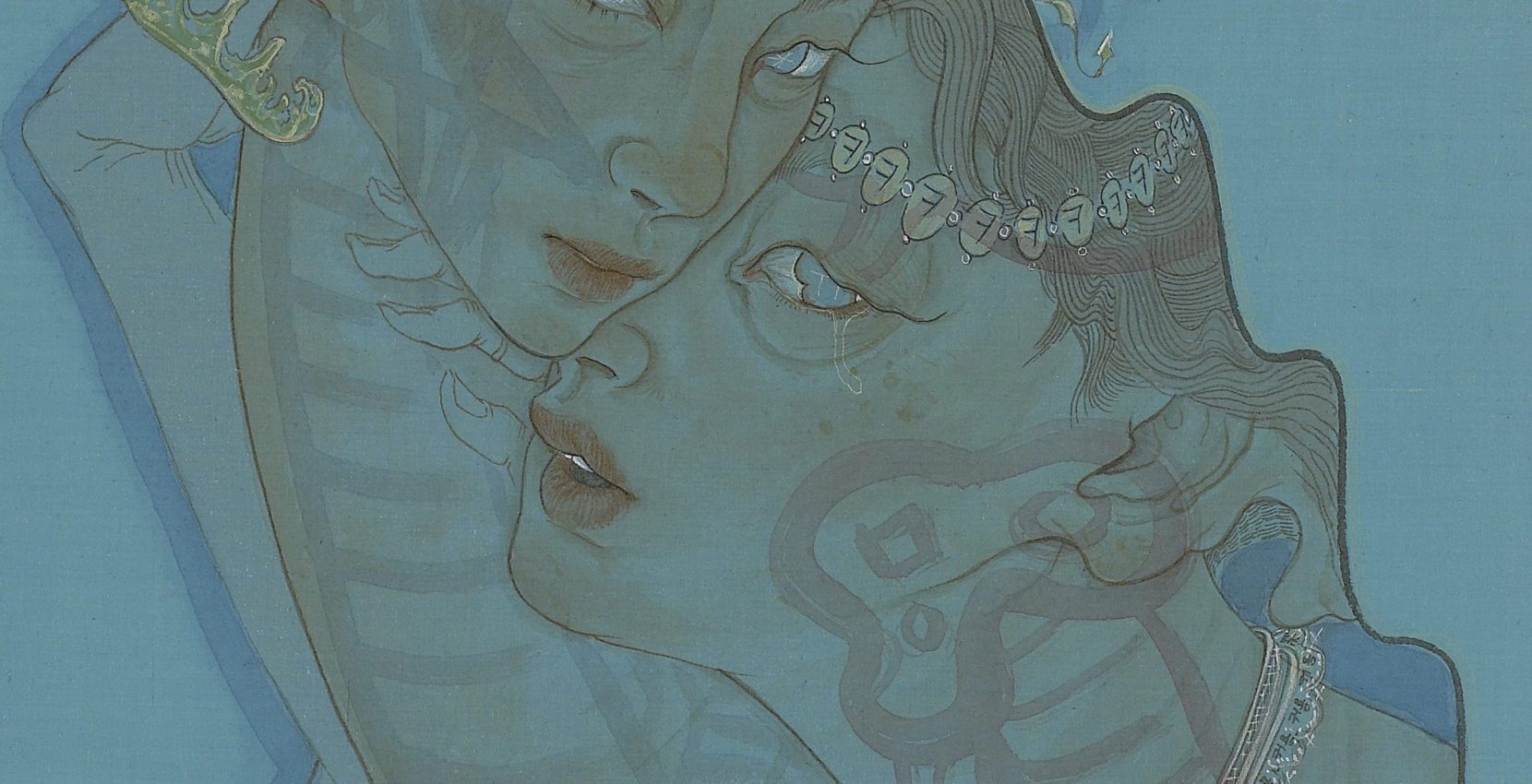 Tae Kim’s haunting portraits visit London for this exhibition where viewer can see how she applies traditional painting techniques with a hyper-modern subject matter, namely the construction of a culture around the seemingly chaotic experiences of online communities. The exciting thing about her work is the layering and intersection of various formal structures that flit between familiarity and alienation.

Interviewed for Trebuchet 11 Process Tae Kim speaks at length about how she synthesises her perceptions into these finished works.

Translucent, otherworldly figures appear floating in soft-hued, limbo-like spaces, each expressing a distinct mood or psychological state. These delicate portraits form part of an ongoing series by Seoul-based artist Tae Kim which explores the heightened emotional experiences of the gaming world and complex notions of identity and ownership within this realm. Although the characters are all based on players that Kim has encountered herself, she has no knowledge of their real-life physicality and uses data collected from their online interactions to imagine them as complex, emotional beings. <Faceless Gamers>, the title of her first solo exhibition with Kristin Hjellegjerde Gallery, plays on the idea of a ‘sitter-less’ portrait to investigate contemporary forms of image-making and communication.

As a self-described digital native, Kim has long used avatars to create different versions of herself in order to interact with others within the virtual realm, often forming lasting friendships. She cites her participation in the cyber funeral of a player who passed while playing an online game in 2007 as a turning point of her artistic practice when she began to question ‘the relationship between the body and the hyperlinked soul.’ Rather than positioning real and digital personas in opposition, she began to imagine an organic, harmonious fusion of these different states of being, a kind of spiritual meeting in a fluid space freed from geographical, social and cultural boundaries.

Her hybrid, deity-like figures visualise this juncture. Although they are otherworldly in appearance, they are not painterly representations of smooth-skinned, idealised virtual avatars. Instead, Kim employs fluid, layered brushstrokes to create a sense of movement, depth and chaos. ‘The smooth skin of the character I meet is too limited to contain the various absurdities, violence, and various human conflicts that occur from moment to moment,’ she says. ‘However, even in a virtual paradise, they make the mistake of repeating the behaviours taught in a competitive and political society.’ As such, her characters’ skin appears translucent, painted with lines and forms that hint at not just their bodily existence, but also their ability to experience pain and emotion. In one painting, for example, a disembodied hand reaches up from the bottom of the canvas to press a finger into the character’s chest, staining their skin red and evoking the appearance of blood. Meanwhile, several of the other works depict digital symbols or Korean text in the figures’ eyes, referencing modes of online communication while also drawing on the notion of the eye as a gateway to the soul.