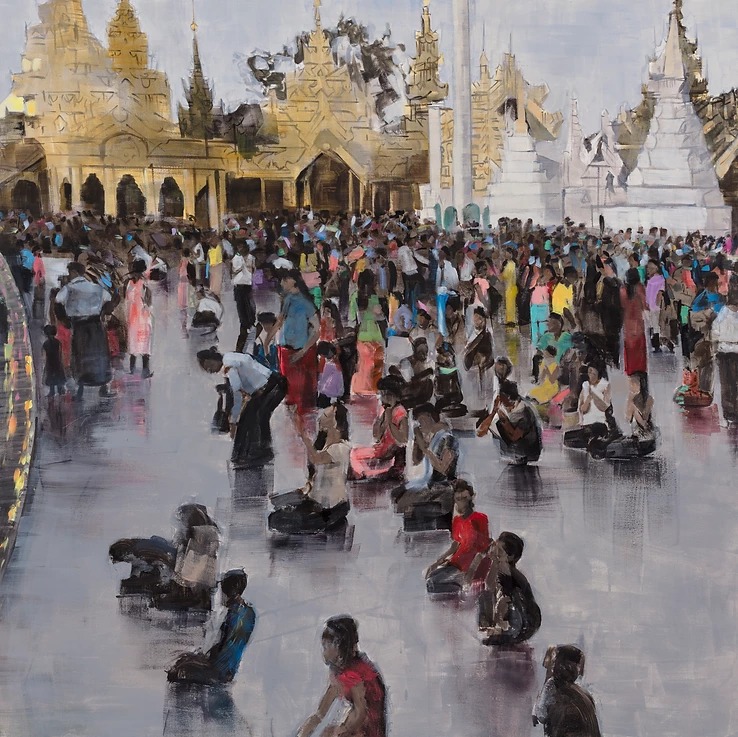 Woolff Gallery, London, presents a new solo exhibition of works by Oona Hassim, which will open on Wednesday 16th September and will continue until Friday 2nd October 2020. The exhibition presents the story of this current unprecedented year marked by the Covid 19 pandemic where the artist observes the city of London before and during lockdown, the ‘Black Lives Matter’ demonstrations and a city slowly re-emerging from isolation.

Oona Hassim’s unique style of painting is poised between figurative and abstract; her subject documents the passage of humanity that traverses the city of London. As one of the contemporary artists who continues to express concern about the city as a paradigm for society, her work depicts the city’s paradox of positive and negative energies; Hassim’s paintings focus on people’s collective reaction to reported events and their freedom to respond. Her work often balances the carefree and colourful streets of London with the tension of a changing environment. This exhibition will bring together a new body of paintings and drawings which examine a variety of public demonstrations: from climate change, ‘Extinction Rebellion’, and freedom of press protests, such as Julian Assange, to NHS demos against austerity, Brexit and Anti-Brexit marches, before the Covid-19 crisis.

The presentation will include a new series of work which portrays the silent and empty streets during the recent lockdown in London. The city void of its crowds quickly becomes an unrecognisable solitary urban beauty. Moreover, Hassim’s paintings capture the eerie calm of deserted roads and squares that were to erupt into the powerful #BlackLivesMatter demonstrations.

The potent emblem of a city is its crowds: Hassim’s #BlackLivesMatter paintings capture the explosion of recent human activity on the streets. Her works harness the power of mass movement and map the mood of its people. Created in oils, acrylics and pastels, the artist’s distinctive palette of soft greys contrasting with bright colours reflect the city’s atmosphere and charged energy. Hassim records these historic events on-site via swift sketches which are later transformed into larger scale oil and acrylic paintings in her studio.

Oona Hassim’s works are exhibited worldwide. Woolff Gallery has worked with Hassim since 2002, during which time her work has been received with enthusiasm by collectors. Hassim’s paintings can be found in the London Institute Collection. Her works have been selected for display at the Royal Academy of Arts Summer Exhibition on several occasions, as well as the Trinity Buoy Wharf prize and the prestigious Jerwood drawing prize.