I thought I would populate the gallery with paintings drawn from the starry world of popular country music, the style befitting or derived from the rural American vernacular – Sam McKinniss Sam McKinniss’s pop influenced works rage across the canvas. The anger that flows around his subjects is a distortion of the hyper-normative models that these pop figures are supposed to represent. Within the arch vacuity of these pop images there is something unsettling, a dispassionate sneer, an endless brittle mirror between the attention seeker and the submissive audience. In his works on celebrity McKinnis often captures the mechanistic edge of society where slabs of colour punch out with an amphetamine polygonal sensuality. A libidinous warning like a perfect tooth piercing a glossed lip. Try as we might, we can’t look away. While we might be repulsed by the wanton lust that his paintings demonstrate, they crave an American audience, we feel we are witnessing what Robert Hughes described as the ‘depraved dreams of a degenerate culture’.

McKinniss’s Country Western series is softer than his previous work, drawing an almost religious inspiration from his remove, the totemic figures are still flooded or broken, but there are tinges of empathy. Has the artists popularity given him an insight into what empties a symbol, whats carves convex depths in the dead eyes of their icons? The liminal light of transition, sunset or sunrise, holds us scintillated with the idea that for some hope exists in change. Best known for painting celebrity subjects, McKinniss now turns his attention to the starry world of popular country music, the genre derived from rural American custom, including small town vernacular speech, fashion, landscape, and musical forms. The exhibition will present new portraits of singers Lyle Lovett, Dolly Parton, Shania Twain, Tammy Wynette, and others. Country Western will not only highlight the artist’s continued efforts as a skilled portraitist, but also as an accomplished colorist. 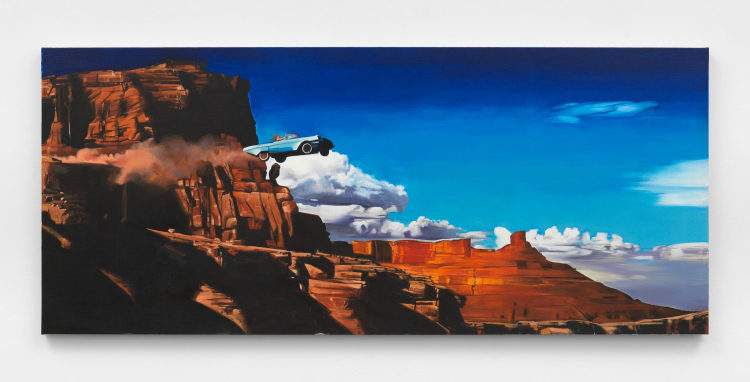 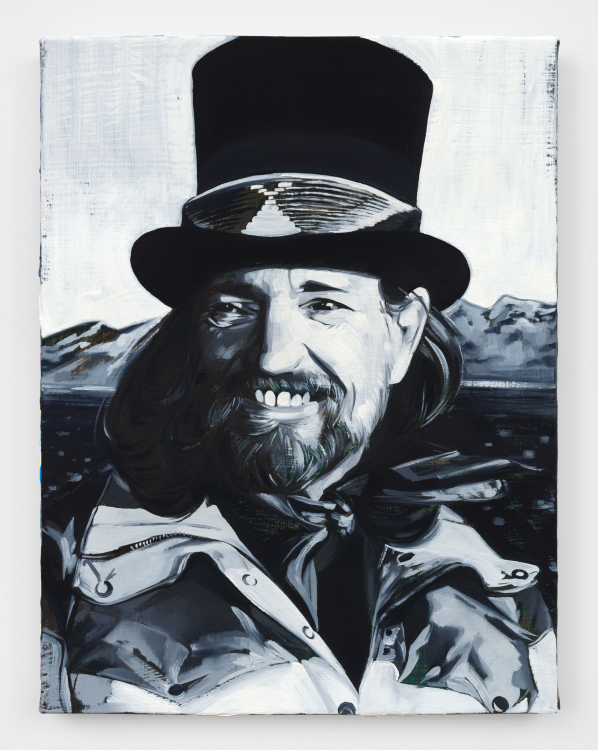 I started imagining a show called Country Western last year, around the same time I began contemplating a move away from the city. Look up Georgia O’Keeffe’s painting The Barns, Lake George, 1926: two black barns against a white and gray sky in the Adirondack region upstate. This will give you the general idea. It’s a harsh setting. For me, relocating to the country is a serious proposition.

Online, I came across a vintage black and white press photo of Dolly Parton smiling and cuddling a kitten. She’s been in the media a lot, again, so I was thinking about her. It seems like the entire planet loves Parton, which terrifies me. What scares me is the enormous task of entertaining so many people, while also taking on the unilateral scrutiny of worldwide love or obsession. Just how does all of that visibility wear on a person. Most pictures of her, including the painting I made of this one image in particular, are enchanting but completely inscrutable. Little is revealed about who Parton might be in private, how she handles the stress. Parton is show business personified, however, showmanship at its most successful, pure, and opaque. This makes it my business to look at her. I respect the opacity—it must function to safeguard her personal life—even if, as a painter, I also believe in translucency. I remember thinking: Every other painting I make for this show should show someone smiling, cruel to be kind. Face as the front of shop. Parton’s teeth look bulletproof to me.

The stark black and white I found with Dolly Parton reminded me of Franz Kline’s best work. Like Parton, I’ve always thought Kline was a totally ravishing artist. I’ve also always wanted to make a show of only black and white paintings, which is more difficult to do than it looks. Jackson Pollock’s Number 1, 1950 (Lavender Mist) is not, by the way, lavender. It mainly consists of black and white drips on bare canvas. Unlike Kline, Pollock had other things going on besides, color-wise. It works. This is the kind of show I thought I would make. Mostly black and white but not really. I’m an American. Winslow Homer, another American, once said, “It is wonderful how much depends upon the relations of black and white. A black and white, if properly balanced, suggests colour.” I thought I would populate the gallery with paintings drawn from the starry world of popular country music, the style befitting or derived from the rural American vernacular, to look for what we might call “local color” in small towns down south, out west, or up north. And then I thought I would search for certain complicating details within or without the genre, inspired by the record-breaking success of rapper Lil Nas X and Old Town Road.