Rare exhibition of Cerith Wyn Evan’s work in the US featuring sculpture, installation, painting, and works on paper. 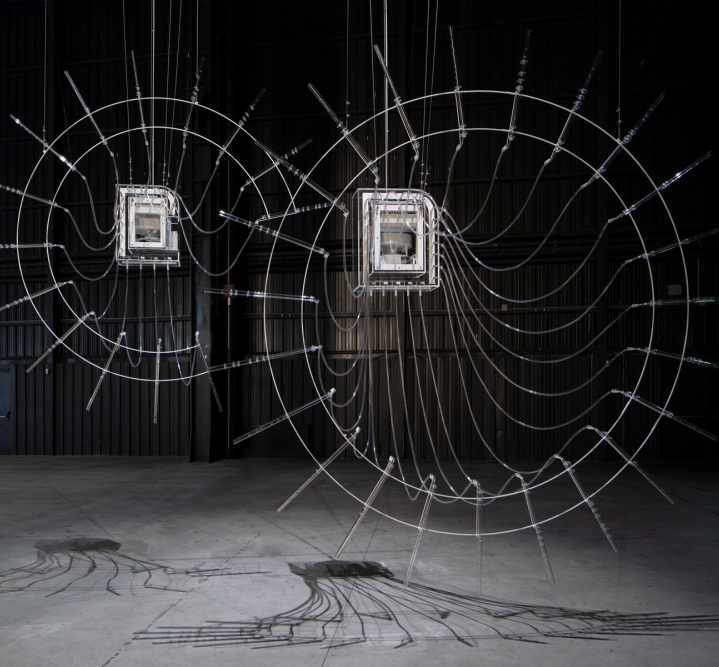 The Illuminating Gas… systematically imposes a formless anxiety, diverging yet centrifugal, directed not toward the most withheld secrets but toward the imitation and the transmutation of the most visible forms: each word at the same time energized and drained, filled and emptied by the possibility of there being yet another meaning, this one or that one, or neither one nor the other, but a third, or none.

Aspen Drift will be the artist’s first US museum presentation in over seventeen years, and will include sculpture, installation, painting, and works on paper.

The feeling of being adrift, indicated by the exhibition’s title, is evoked by each of the works on display, but also references the snow drifts of Aspen’s mountainous landscape. The act of drifting suggests a type of freedom—subject to a controlled randomness unconstrained by ego—that is at once radical and romantic. For the artist, neon works suspended and isolated in space are as driftwood. The sound emitted by the work D=U=E=T (in other districts of sense) (2017) resembles the drift often present on a radio signal. The notion also resonates with current times, as the particular uncertainties of the pandemic find us all, in a sense, adrift.

Wyn Evans’s exhibitions are site-specific, with each show acting as a catalyst for potential discursive paths. He engages with the interrogation of perception as a model, contemplating how his viewers interpret not only his work, but their spatial surroundings and broader systems of interpretation such as spoken and written language.

He is well known for his intricate neon sculptures, which have been described as drawings in light. This exhibition will include sculptures from Wyn Evans’s Neon Forms (after Noh) series, which depict notational diagrams for dancers that come from traditional Japanese Noh theatre. Suspended in space, these works use light to translate more nuanced and complex ideas.

Wyn Evans also presents sculptures employing Italian Murano glass chandeliers. His work S=U=T=R=A (2017) turns on and off to the artist’s musical composition, transforming light into sound. StarStarStar/Steer (Transphoton) (2019), the LED filament column light work comprises seven columns exhibited in Gallery 1 and 2 which fade up and darken according to a preprogrammed algorithm resembling the act of breathing. The assembled works brought into concert here play out their exchanges in folds and flows in contrast and reflection.

Here we encounter scenarios that solicit the question, What does it mean to be a viewer?

This exhibition is curated by Nicola Lees, Nancy and Bob Magoon Director.