[dropcap style=”font-size:100px; color:#992211;”]T[/dropcap]otal recall of the plot details that make up your life to date, or a word-for-word memory of the conversations you’ve had?

If we’re honest, we’ll settle for knowing why we’ve been staring at the inside of the fridge for the last five minutes.

Why is it that some people have richly detailed recollection of past experiences (episodic memory), while others tend to remember just the facts without details (semantic memory)?

A research team from the Rotman Research Institute at Baycrest Health Sciences has shown for the first time that these different ways of experiencing the past are associated with distinct brain connectivity patterns that may be inherent to the individual and suggest a life-long ‘memory trait’.

The study was recently published online in the journal Cortex.

“For decades, nearly all research on memory and brain function has treated people as the same, averaging across individuals,” said lead investigator Dr. Signy Sheldon, now an assistant professor of Psychology at McGill University.

“Yet as we know from experience and from comparing our recollection to others, peoples’ memory traits vary. Our study shows that these memory traits correspond to stable differences in brain function, even when we are not asking people to perform memory tasks while in the scanner.” 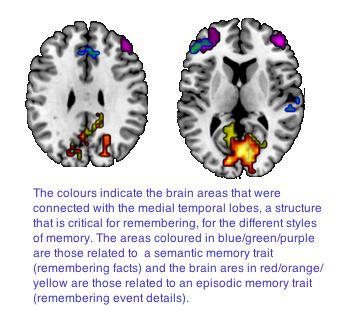 After filling out the online survey, the 66 participants had their brains scanned at Baycrest with resting state functional magnetic resonance imaging, a technique that maps patterns of brain connectivity, or how activity correlates across different brain regions.

The findings raise interesting questions for cognitive scientists, related to aging and brain health. One of the more provocative inquiries: could certain memory traits be protective, delaying the manifestation of age-related cognitive decline in later years?

“With aging and early dementia, one of the first things that people notice is difficulty retrieving the details of events,” said the study’s senior author Dr. Brian Levine, a senior scientist at Baycrest’s Rotman Research Institute and professor of Psychology at the University of Toronto.

“Yet no one has looked at how this relates to memory traits. People who are used to retrieving richly-detailed memories may be very sensitive to subtle memory changes as they age, whereas those who rely on a factual approach may prove to be more resistant to such changes,” he said.

Could a person’s profile of memory traits help guide treatment of memory issues in later life? The Rotman findings open the door to exciting possibilities that require further scientific exploration, said Dr. Levine. Follow-up studies are now being conducted relating memory traits to personality, psychiatric conditions such as depression, performance on other cognitive measures, and genetics.

This research is part of a new trend in focusing on differences in brain structure and function across healthy people. It is the first to relate such brain differences to differences in everyday autobiographical memory functioning.

Next Story:
Reliable Witness. At the launch of Bleeds. (Roots Manuva)