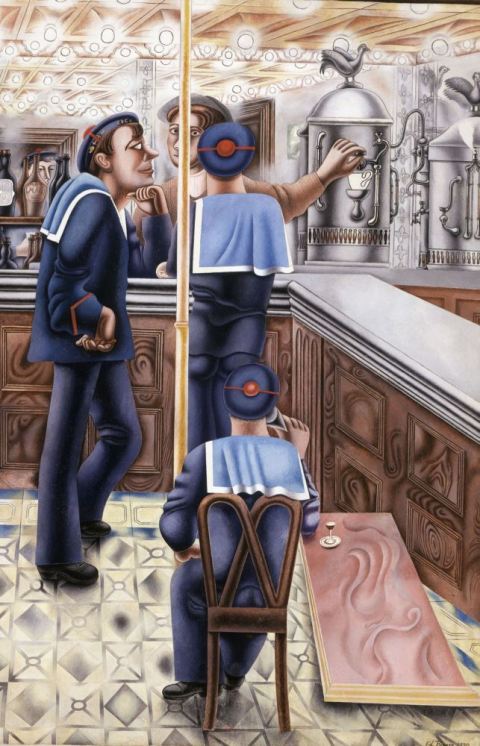 In some respects a English version of Georg Grosz, Edward Burra's art is more personal, less political. And very sexy.

Burra, a master of colour and the human form, places one in a three-dimensional theatre of mixed emotions and messages. Like trying to understand a white light of red, green, and blue shone in one’s eye at a club surrounded by dressed carbon copies and lookalikes of one’s old friends, Burra’s work is peculiar. Burra brings a kind of hyper-reality of his own thoughts and situations to his work.

With expansive narratives of imagery; whether it be sailors (Three Sailors at the Bar 1930), fishermen (The Habour, Hastings 1947), the devil (Beezelbub 1937-38), or a couple falling into a false marriage of fractured sexuality (Marriage a la Mode 1928), Burra holds a peculiar view and angle on the interplay between the characters in his work. He is a voyeur and purveyor of the human body, turning your attention internally as you gradually understand his mindset of looking behind and around the body shape in an almost scrupulous way. So when studying Burra’s work and its surroundings: the space, the people, the atmosphere, you take on this examination again (with the same emphatic hyper-reality that you see in his work) to your own surroundings.

The rounded nature of torso, bottom and body shape that I kindly admire in a young lady I know, is turned into the adeptly contoured shapes and revered colours that Burra was moved to make when creating his own world of sexuality. I remove the reality of today, and subject reality to Burra’s vision, to re-envision reality with Burra’s palette for shape and colour.

I do not know whether this is a common practice, but it sure makes an exhibition come to life. And Burra’s work does come to life, it holds characters that could only be found within the mind and experiences of a man who sees more than there is to the eye; detaching reality for his own ideas of what is occurring in many moments in time, asphyxiating those ideas into a single piece of art work. 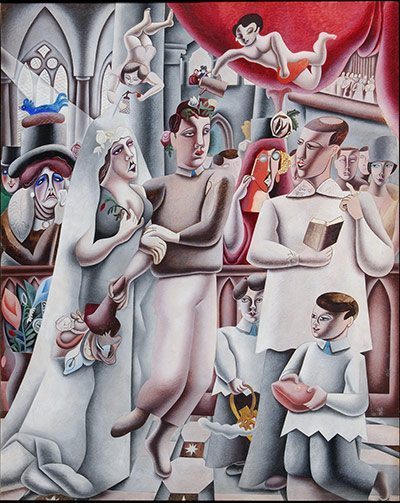 Marriage a la Mode (1928) presents the view of a story of misfired givings between a man and women: a prancing youngster holds with both hands onto the forearm of a bouquet-dropping young lady. She is suggestively encircling the top of said bouquet with thumb and forefinger as she pulls her cleavage apart, gazing at the vicar, or maybe to the man in the background with raised eyebrow. The prancing man looks outwards towards this very same male, or onto the other female in the foreground. The splash of water on his head, blushing colours, stance, and his lean away from his new wife would suggest the former.

suggestively encircling the top of said bouquet with thumb and forefinger

But the reality of this situation and suggestion is shown in Burra’s top-hat nested weeping woman and the two-faced lady in red, mothers of the to-be husband and wife. All is not well. And is it not that the young male carrying the ‘ring’ has his hands firmly clasped around the side of a pink shapely cushion, as the smoke drifting out of the carrier is so well defined as to make the prancing man step out of its way?

The sexuality in Marriage a la Mode is undeniable, even the red drapes hung over the crowd look like labia that have just given birth to the floating child. Does this occur throughout Burra’s work? Yes.

So where do you and I go from here? Apart from asking you politely to visit Nottingham and view this exuberant one-off exhibition, I could lecture all day about the body forms that Burra takes and redefines to make his own perfection of the human body, and in particular the male human body-form. But would I be missing Burra’s point? Not that I am sure exactly what Burra’s point was, except that society of the day was such that sexuality was hidden badly by sailors, transvestites, and men about to get married.

It would serve easier to just talk whimsically about Burra’s difficulties of chronic arthritis and blood disease and how that affected his work, but that would be unfair to a man that was so determined and talented.

I could bleat on about the homosexual references in his work, which is also a given, but that would be to undermine his own knowledge of his own sexuality. So where’s the edge?

The edge is in the unknown of Burra’s work. The unknown is how the hell he managed to accomplish such great  feats with paint, pencil, water and oil. The unknown is the theatricals of who is looking at whom in his work? Moreover, Burra’s trickery of the mind: who is the one wanting somebody to be looking at someone? He makes a device of one’s own perceptions of the interactions between Burra’s characters in a gendered/sexualised nature. Is the to-be husband in Marriage a la Mode a homosexual? Or is Burra asking you why do you think he is or is not a homosexual? And if so why? 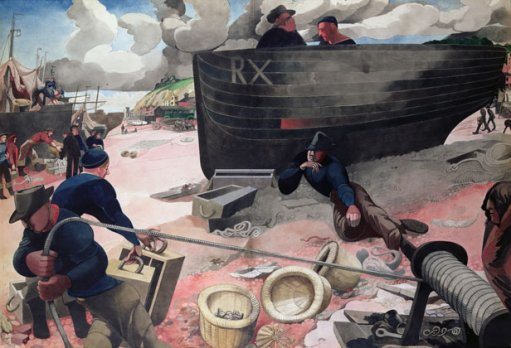 Again, The Habour, Hastings (1947), who is the sailor looking at? and why? Then again, which sailor? Is it as simple as that? Are we even meant to care about the story line, or are we just meant to look at the pretty picture?

Burra places you in an unforgiving position of how we view one another, and undoubtedly how he was viewed himself. Burra asks questions of why directed thought is pushed this way or that, of what undirected thought is and what it should be, and whether there are conflicting undertones and unknowns. They are, funnily enough, only questions the viewer can take from the imagery and theatrics that Burra allows to be depicted in his work.

enthralled by the bizarre

Burra is not saying that what he views is or isn’t bizarre, just that he was enthralled by the bizarre, and that the bizarre holds many unknowns. Maybe because it is pushed aside to the outskirts of society, Burra went to find it, maybe because he found himself to be bizarre. It seems absurd and bizarre to deliver judgement on another for sexualising the male body in painting and  thinking, as Burra does so clearly. It is not to recognise the sexuality in Burra’s work, but the vision of  prescribed sexuality taken in gender form that should be recognised.

Burra does take sexuality and confuse it across gender spectrums within his work, and I believe this is to sexualise and confuse the viewers’ opinion of the characters within that work. In this Burra brings clarity; a good slap to the aristocracy at the time no doubt, and again to the art critics that still hold it as a central talking point for his work, and to myself for being oblivious.