Sadly, eco tourism impacts too. And although the stressful effects of human contact with orangutan populations in Malaysia seem temporary, it's hard not to feel that no stress at all is a better outcome.

Wild orangutans that have come into contact with eco-tourists over a period of years show an immediate stress response but no signs of chronic stress, unlike other species in which permanent  alterations in stress responses have been documented, new research from an Indiana University anthropologist  has found.

Indiana University anthropologist Michael P. Muehlenbein can't say yet what makes the wild orangutans of Borneo deal with  stress differently than other species in other locations, but an analysis of orangutan stress hormone levels recorded before, during and after the apes interacted in the wild with eco-tourists found evidence of acute  elevation of the stress hormone cortisol the day of an interaction, with levels then returning to baseline afterward.

By analyzing fecal glucocorticoid metabolite (fGM) levels of orangutans in the Lower Kinabatangan Wildlife Sanctuary in Sabah, Malaysia, the team led by Muehlenbein was looking to, among other things, gather evidence about levels of disturbance on wildlife exposed to eco-tourism, a multi-billion-dollar-a-year industry that is growing annually.

Red Ape Encounters, a community-owned and -operated eco-tourism program in Sabah that assisted with the research, facilitates the only trekking program for wild orangutans in the world. Eco-tourism guidelines used by Red Ape Encounters include limiting visitation groups to seven people for no  more than one hour; excluding sick tourists; maintaining a 10-meter minimum distance; and requiring appropriate behavior.

"When we compared samples obtained the day before, the day of and the day after tourist  visitation, we found that stress hormone levels were significantly elevated in samples collected the day after  tourist visitation."

"Transiently elevated stress hormone levels must be interpreted conservatively, as these may simply reflect normal responses to stimuli," Muehlenbein said. "But nature-based tourism programs that result in permanent alterations of stress physiology in their animals cannot be viewed as sustainable. However, low levels of predictable disturbance likely result in low physiological impact on these orangutans."

On a wider scale, he pointed out, animal usage should be kept minimal — at least for pregnant females and ill animals and during times of resource restriction — and the habituation processes gradual for all animals involved in eco-tourism. 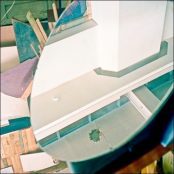