Light in Motion: The Photography of Echo Lew

Echo Lew’s recent work holds a history that is equally based in aesthetics as well as utility.

[dropcap style=”font-size:100px; color:#992211;”]T[/dropcap]he son of two Taiwanese farmers, Echo Lew grew up alongside seven siblings, all of whom farmed his parents’ small acreage of land throughout their youth.

Then, after the civil war (when the Republic of China was reduced from the mainland to Taiwan), Lew was given the opportunity to obtain an education, an incentive offered by the government in an attempt to boost industrialization.

When given the chance to attend college, Lew followed his parents’ advice. He majored in navigation for the Merchant Marine although he desired to study fine art and admits that he “skipped most his…classes to audit art courses, where he spent more time in the studio than students who were taking that degree,” as offered by Robert Seitz.

Upon graduation, however, Lew quickly realized that “life at sea as a navigator for the Merchant Marine” offered him experiences he may never had otherwise. Not only did he visit eleven new countries, but he used his shore leaves to explore as many art museums as he could worldwide. 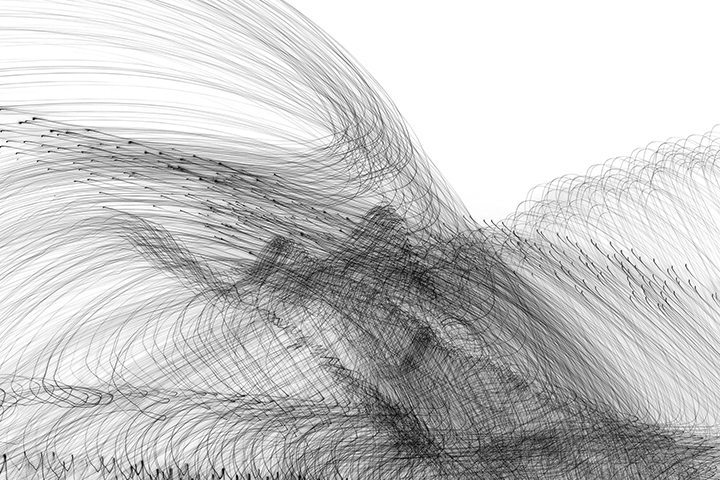 Lew eventually emigrated to the United States and in doing so undertook an ambitious path. The confidence and knowhow he’d gained at sea provided him with the drive to begin a design business and thus invent more than 50 patents for new bodies of ballpoint pens. While he attributes his success in this field to his studies as a student of art, it remains evident that his parents’ urging for practicality also played a considerable role in the evolution of his innovative endeavors.

After working with traditional media for nearly thirty years, Lew’s curiosity about the effects of light in motion prompted an investigation with experimental photography. Not only did this lead him to “spontaneously tap into decades of drawing experience while [his] camera’s shutter was open,” as articulated by Lew himself, but it provided him with a means to express his experiences as both an inventor and a fine artist.

Interestingly, Lew’s recent work holds a history that is equally based in aesthetics as well as utility. Some of the first artists to experiment with light and the suspended opening of the camera shutter include Man Ray and Picasso, in addition to the Futurists. While their works are undeniably influential to Lew’s practice, as equally relevant are the motion studies that Frank and Lillain Gilbeth conducted during the early 20th for the sole purpose of industry.

While various influences have helped to shape Lew’s work, his “light drawings” are nothing short of phenomenal. Truly unique, they each embody a cohesive fluidity that emit an intensity comparable to that of a ocean’s crashing wave while, at the same time, a graceless ease emblematic of a Baroque symphonic composition.

Previous Story:
Thanks! The Proven Way to Get The Right Kind of Attention

Next Story:
We Shall Overmeme: Why Slacktivists Make a Difference