Ever bounced off a car bonnet and fallen into the arms of your lover?

This is how ‘Loa’s Kingdom’ makes me feel. As Vodun have stated already, they are possessed. Thankfully the sort of possession in evidence tonight isn’t that which the Vigilant Citizen frequently reminds us about – no monarch butterflies, shattered baby mannequins, cracked glass, pyramids or one-eye symbolism here. Rather, this evokes pedalos in a tsunami. (Do I see a coelacanth in the room?) You don’t forget something like this.

Another publication described Oya’s voice as reminiscent of stampeding bison. I want to put it on record that Oya’s voice is the return of Nibiru with its attendant havoc; yes, it really is that big. Pulsating plasma pouring from the mouth of the Trevi fountain and spewing hypnotically, in dreams.

Does the face-paint make them ‘Oya and her Technicoloured Dreamboats’? Don’t be fooled by appearances: this is not kindergarten voodoo chic with a tin of chunky riffs. (And Vodun is not a font type either – I checked.) Any fleetingly lingering doubts about the dancing seeming a little incongruous with the music are quickly dispelled. Vodun are comprised of genetic discs of oval light. Oscillate, gladly. I don’t agree with Vodun being soulful though – they are spiritful. 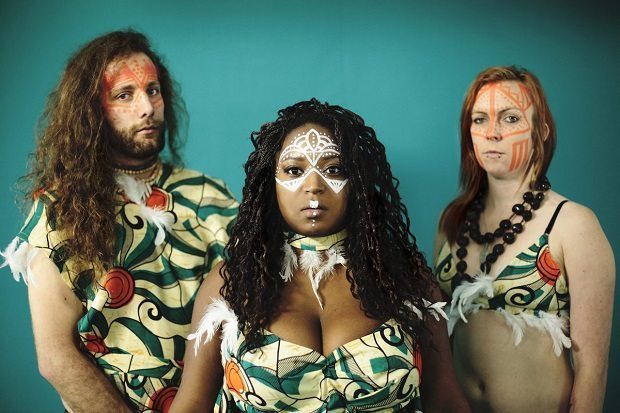 This is an interesting blend and it has truly deeper meaning. In fact it may even be unique. Even if their inspiration finds its source on the African continent its roots will go back further: to Atlantis rising. Is this what Oya’s voice really symbolises?

The guitar bleeds on ‘Bloodstones’, the drums lava-flow through ‘Minos Army’, and as the stupendous Mawu channels the divine feminine any negativity is scattered to the wind. Remember, if a thing’s worth doing it’s worth doing throbbingly; that’s what ‘Possession’ does. Ambrosaic mosaics trapped in mosquito nets, that’s what Legba’s Feast is. Divinity is a paradigm shift and if you are going to put a shift in, kids, then make it a paradigm one. You know that thing about music taking you to different places? Glad I bought a single!

Lisa would be proud and beaming like a sabre toothed tiger: she has made her presence felt in the most moving way tonight. Dolphins licking pufferfish couldn’t get much higher.

About Skinnycandy 8 Articles
Boho skeleton and full time professional clownfish who understands the fine line between nuance and nuisance. After a lifetime of playing guitar and writing, he ought to.