But Can it Catch? Chemical Computer Recognises a Sphere

The prototype of a chemical computer detects a sphere

[dropcap style=”font-size:100px; color:#992211;”]P[/dropcap]
rior to the development of the silicon chip, the term ‘computer’ referred to a human employee tasked with tallying resources, stocks, accounts and other such quantifiable concepts.

New research toward the establishment of chemical computers brings us one step closer to the sci-fi fantasy of organic computers, and perhaps closer to a time when we all remember that our most versatile cognitive apparatus is our own brains.

Chemical computers are becoming ever more of a reality – this is being proven by scientists from the Institute of Physical Chemistry of the Polish Academy of Sciences in Warsaw. It turns out that after an appropriate teaching procedure even a relatively simple chemical system can perform non-trivial operations. In their most recent computer simulations researchers have shown that correctly programmed chemical matrices of oscillating droplets can recognize the shape of a sphere with great accuracy.

Modern computers use electronic signals for their calculations, that is, physical phenomena related to the movement of electric charges. Information can, however, be processed in many ways. For some time now efforts have been underway worldwide to use chemical signals for this purpose. For the time being, however, the resulting chemical systems perform only the simplest logic operations. Meanwhile, researchers from the Institute of Physical Chemistry of the Polish Academy of Sciences (IPC PAS) in Warsaw have demonstrated that even uncomplicated and easy-to-produce collections of droplets, in which oscillating chemical reactions proceed, can process information in a useful way, e.g. recognizing the shape of a specified three-dimensional object with great accuracy or correctly classifying cancer cells into benign or malignant.

“A lot of work being currently carried out in laboratories focuses on building chemical equivalents of standard logic gates. We took a different approach to the problem,” says Dr. Konrad Gizynski (IPC PAS) and explains: “We investigate systems of a dozen-or-so to a few dozen drops in which chemical signals propagate, and treat each one as a whole, as a kind of neuronal network. It turns out that such networks, even very simple ones, after a short teaching procedure manage well with fairly sophisticated problems. For instance, our newest system has ability to recognize the shape of a sphere in a set of x, y, z spatial coordinates”.

The systems being studied at the IPC PAS work thanks to the Belousov-Zhabotinsky reaction proceeding in individual drops. This reaction is oscillatory: after the completion of one oscillation cycle the reagents necessary to begin the next cycle are regenerated in the solution. A droplet is a batch reactor. Before reagents are depleted a droplet has usually performed from a few dozen to a few hundred oscillations. The time evolution of a droplet is easy to observe, since its catalyst, ferroin, changes colour during the cycle. In a thin layer of solution the effect is spectacular: colourful strips – chemical fronts – traveling in all directions appear in the liquid. Fronts can also be seen in the droplets, but in practice the phase of the cycle is indicated just by the colour of the droplet: when the cycle begins, the droplet rapidly turns blue (excites), after which it gradually returns to its initial state, which is red.

“Our systems basically work by mutual communication between droplets: when the droplets are in contact, the chemical excitation can be transmitted from droplet to droplet. In other words, one droplet can trigger the reaction in the next! It is also important that an excited droplet cannot be immediately excited once again. Speaking somewhat colloquially, before the next excitation it has to ‘have a rest’, in order to return to its original state,” explains Dr. Gizynski.

For the system to process information, the latter has to be introduced into it, and after processing it has to be read out. It is also important to have the ability to modify the way the system processes information in a controlled manner. To meet these challenges, researchers from the IPC PAS used light and an additional (apart from ferroin) catalyst, ruthenium. The Belousov-Zhabotinsky reaction catalyzed by ruthenium has an important feature: it is inhibited by blue light, which means that with intensive illumination the droplets cease to oscillate. By changing the illumination of a specific droplet it is therefore possible to decide whether it is to be involved in the processing of information or not, and to excite it according to any selected pattern. In the case of droplets used to input information, a longer illumination time means a greater value of the spatial coordinate to be entered.

“In practice, the illumination of droplets can be controlled individually by attaching a separate optical fiber to each droplet,” says Dr. Gizynski and stresses that all the simulation parameters – transitions between droplet states, the propagation of chemical fronts between droplets, stopping and resuming the reactions by the light brought in by the fiber as well as the production of networks of droplets – were selected on the basis of previously performed experiments. 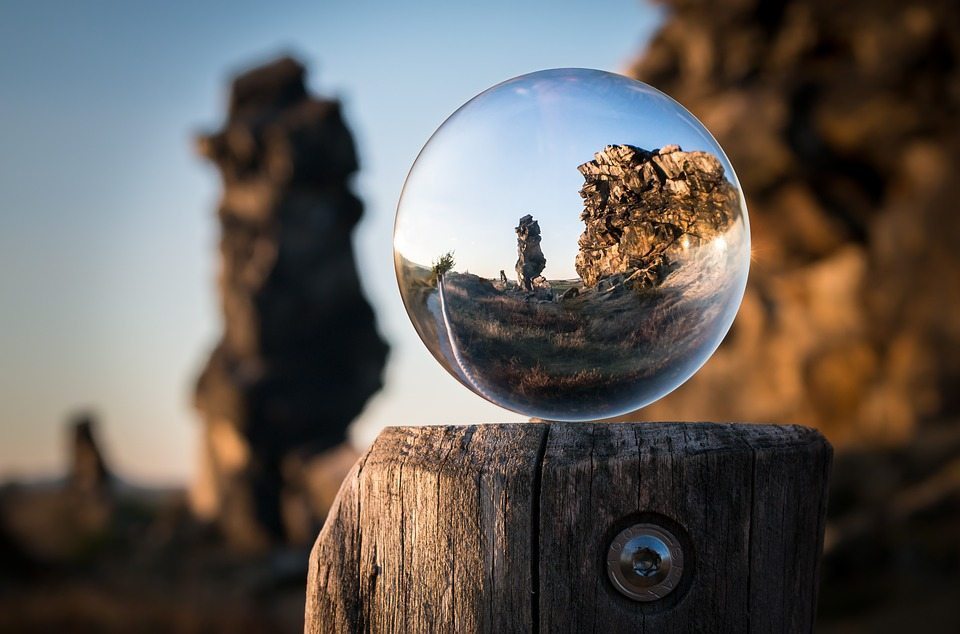 In their simulations, researchers from Warsaw looked for methods of detecting the shape of a sphere, considering networks composed of 2×2, 3×3, 4×4 and 5×5 droplets. To map the actual rates of the chemical reactions it was assumed that a droplet spends one second in the excited state and next returns to a state in which it can be activated again within the time of ten seconds.

Before starting the teaching procedure, the researchers also had to create the right ‘textbook’ with a description of the sphere. For this purpose, they generated a random set of points which were assigned a value of 1 when the given point belonged to the sphere or 0 when the point lay beyond it. A database prepared in this manner became the basis of the teaching process, in which each of the components of the point (x, y, z) determined the time of illumination of different input droplets.

To teach the system of droplets to detect the shape of a sphere, researchers from the IPC PAS used evolutionary algorithms. The teaching procedure began with the random generation of 30 patterns of illumination of the system, in which some droplets were treated as the input, while the others remained inactive for the time which was the subject of the optimization. After the droplet system had processed the entire database, the droplet which time evolution was best correlated with the expected result was treated as the output. From the first generation of systems thus obtained a few of the best were selected, multiplied by on the way introducing small changes (‘mutations’) in the manners of illumination and the teaching cycle started again from the beginning. The teaching procedure continued for 500 generations.

“We achieved the best results for the 4×4 droplet network. It showed the greatest accuracy in detecting the shape of a sphere, at a level of 85%. In addition, it acquired this ability the most rapidly, in just 150 generations. The 5×5 system could perhaps be better, but in order to check this, the teaching process should be extended to more than 500 generations,” says Dr. Gizynski.

Droplet systems do not interpret the incoming data, they just look for correlations (‘shapes’) among them similar to the one they have been taught to find. Instead of the spatial coordinates of points with the shape of a sphere they can thus be fed with data with a different meaning, e.g. associated with the different characteristics of tumour cells. The system would then be able to seek the ‘shape’ of the data corresponding to, for example, benign or malignant tumours.

“Indeed, in one of our recent publications, carried out in collaboration with colleagues from the University of Jena, we showed that the 5×5 droplet system could classify cancer cells from a machine learning dataset, Wisconsin Breast Cancer Dataset, with a precision of up to 97%. Better results are achieved using conventional computers, but these also include classifiers acting less effectively. Thus, the chemical processing of information, although still heavily flawed, is beginning to offer more and more interesting and more useful possibilities,” concludes Dr. Gizynski.

Source: Eurekalert/Institute of Physical Chemistry of the Polish Academy of Sciences
Image: Pixabay/Didgeman