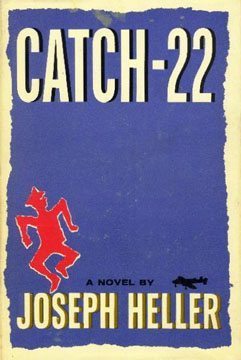 Continuing with the Trebuchet-News inadvertent sub-theme in which we look at interesting letters which just happen to be for sale in prominent auction houses, today's news story concerns Joseph Heller's Catch 22. 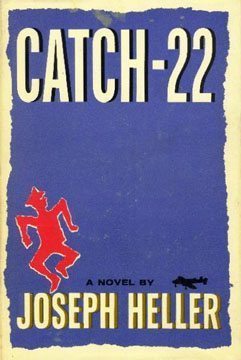 To be more precise, it concerns certain statements Heller made about his war experiences which contradict the book's status as an anti-military polemic.

Catch 22 is ingrained so deeply into popular myth that is title has become an idiom for any paradoxical, lose-lose situation. It took as its central axiom the premise that it was impossible to seek a discharge from military service by claiming insanity, because to seek discharge from service would prove the applicant's sanity. Or, as Heller explains it in the book:

There was only one catch and that was Catch-22, which specified that a concern for one's safety in the face of dangers that were real and immediate was the process of a rational mind. Orr was crazy and could be grounded. All he had to do was ask; and as soon as he did, he would no longer be crazy and would have to fly more missions. Orr would be crazy to fly more missions and sane if he didn't, but if he were sane he had to fly them. If he flew them he was crazy and didn't have to; but if he didn't want to he was sane and had to.

Nevertheless, Heller – the model for the book's main character, Yossarian, didn't share the same aversion to military service as his anti-establishment character. In fact, it seems he rather enjoyed the experience.

'…How did I feel about the war when I was in it? ….In truth, I enjoyed it, and so did just about everyone else I served with, in training and even in combat…. What is hard to get across to younger people today is that after the attack at Pearl Harbor, there was virtually no opposition to the war in this country….There was the prospect of travel and a general feeling of a more exciting and eventful period ahead. The experience was enjoyable until about my thirty-seventh mission. On that one I was frightened for the very first time….

The quotation comes from Heller's 1974 letter to Professor James Nagel of Northeastern University, and serves as a reminder that sometimes, no matter how tempting it is to consider many artistic works as autobiographical, fiction is fiction. The letter is to be auctioned by http://natedsanders.com/