Can We Talk About JOHN? (DV8 Physical Theatre)

[dropcap style=”font-size:100px; color:#992211;”]I[/dropcap]n his Tales of the City suite, author Armistead Maupin achieves the improbable by conveying the gay sauna as a site of compassion and camaraderie.

Maupin’s San Francisco of the 70s and 80s, whilst idyllic in relative terms, still suffers from intolerance and homophobia. Those drawn to its permissive environs from smalltown origins continue to encounter institutional prejudice, stigma, violence and disease. It is, as memorably voiced by the character Teddy Witherington, in the shared anonymity of the steam room that those individual experiences, those personal narratives of pain and sorrow, are set aside for a superficial but shared joy in the body of an equally aroused sexual partner (or partners).

A generation or two later, and the gay sauna has a very different interpersonal dynamic, at least according to the world experienced by John in DV8 Physical Theatre’s production of the same name. With dialogue taken verbatim from a series of interviews, the trademark technique of the company’s choreographer/director Lloyd Newson is maintained in JOHN, and it is worth clarifying at the outset that the protagonist is one of a group of men interviewed about their experiences at a single establishment.

Knowing this at the outset explains what, in the performance, appears to be an abrupt and slightly incohesive shift of emphasis from the narrative highlights in the life of one very unfortunate man, to a series of vignettes concerning a big city sticky rubhouse. The story started with the sauna, but John’s tale grew in the telling.

And it is quite a tale, involving the compounded experiences of the eponymous John, now in his fifties. There are all the calamities of a Daily Mail hell-in-a-handcart shock column: physical abuse, incest, rape, unmarried parenthood, drug addiction, alcoholism, AIDS, shoplifting, benefit fraud, obesity, arson, prison. The pathos is, it must be said, a little unrelenting in the first half-hour.

Institutions, and being institutionalised, provide John’s only structure and direction. As he recounts of his childhood:

Prison slims him down, cleans him up and, in the form of a post-sentence job as inmate liason, provides him with something approaching the middle-class normality which he confesses to craving.

What is missing in his post-prison life is love, something which he has experienced already even if he does not directly admit it (the two proto-verbal animal groans which Hannes Langolf (as John) utters in anguish as he describes the death of a lover are spinechilling in their dramatic effect – an irony in a performance which is otherwise so visual).

Eventually the two points of focus diverge, as John describes his experiences at the sauna which is concurrently the subject of the other interviewees’ material. The very anonymity, silence, carnality and emotional disconnection of sexual encounters in the sauna (which compound John’s agony of loneliness) are the whole point of the place for the other interviewees. 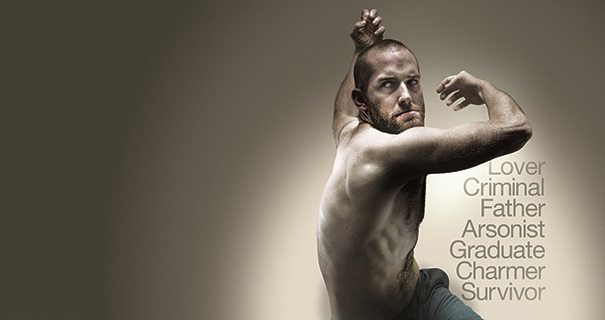 The proprietors see it as a service and as a business. Their customers (and themselves – characterisation is studiously vague, roles and protagonists blur at times, perhaps reflecting the clonish interchangeability of the 10,000 people claimed to pass through the place each month) prowl and strut, inhabiting metaphors of the hunt, the catch, the relative merits of each. Issues are raised – HIV, GHB, the glorified machismo of unprotected sex and the playground cruelty of partner selection.

Then there is the poo sequence – an extended duologue concerning the unfortunate mobility of the stuff around the premises – which provides a much-needed dose of comic relief at an opportune moment in the performance.

Sordid, yes, but openly so. More nefarious is the testimony of one HIV-positive man and his competitive disregard for the health of his partners. If they’re too unassertive to demand a condom, infection is their own fault, he crows. It’s not about education, but about attitude, another character corroborates. Everyone knows they can catch HIV, yet too few insist on protection. ‘Man up’, he suggests.

It must be remembered that JOHN is documentation, not fiction, and factor that into any wish to moralise. Gay saunas are either sordid or efficient, depending on your viewpoint, but their place in society is not under scrutiny here. DV8 interviewed and edited their material down to the dialogue which remains in the script, and clearly chose that material which best suited their dramatic aims, but it is primary source material all the same. We are called upon to observe, not to judge.

Does sincerity have a more restricted lexicon of body language than guile? Lloyd Newson’s choreography suggests that it does. In his preceding work, Can We Talk About This? particularly, and in JOHN too, the performers draw upon a range of expressions from flared nostril to vogued handswipes to pointed toe to shrugged shoulder. With them, Newson’s performers precisely convey supercilious judges, bombastic journalists, mealy-mouthed politicians, self-justifying abusers. As Newson admitted in an interview with The Independent – the company spent hours in the rehearsals of JOHN on the precise choreography of eyebrow movements.

On paper, such micromanagement may seem overbearing, but the end result is an immersive spectacle of semiotics in which the spoken text plays only a minor role. Script in a DV8 production occupies a similar role to lyrics in opera – important, but not by any means the primary vehicle of communication.

Towards the end, in a sequence which has more emotional impact than any preceding, Hannes Langolf’s voice is replaced with a segment of the original recordings, this time featuring John’s own voice. It is poignant and perfectly timed – a pointed reminder that even if we can tut at John’s alleycat proclivity, or skeptically raise an eyebrow at his picaresque narrative, he is in fact a real man and moralistic judgements on our part are as redundant as they are irrelevant.

But whilst there are a staggering range of ways to convey, with body movements, arch detachment, bureaucratic intractibility, conceited disdain or frustrated impotence, there seem to be fewer ways to project sincerity and naive honesty. Or perhaps those which exist have been misused to the point we no longer trust them (the gesture toolkit of the footballer appealing to a referee is perhaps the most obvious example).

Thus, in playing John, Hannes Langolf already has a bent deck to deal with, and if they deserve high praise for nothing else, Langolf and Newson must be given credit for so convincingly creating a sympathetic character out of a script which, if we were to read it on paper, would come across as the story of a sexually incontinent layabout with no defined moral compass, self-control or social responsibility. And a grass to boot.

Instead, Langolf’s stellar performance projects vulnerability, tenderness, sincerity and ultimately, hope. His body is, to cull another reference from football, opened out, unprotected. The trope is more noticeable in contrast to those onstage with him: the arm across-chest (or vertically held upwards with fingers-touching-shoulder) of the sauna-owners; the raised shoulders and foot-shuffling of the psychiatrist; the cagey duck-and-weave of the shoplifters (of which John is one, but here his shifty movements match his context).

There are set pieces, of course: the statuesque poses of the opening sequence; the lead-booted nod to Dick Van Dyke’s Jack-in-the-Box routine; the shoplifters; the GHB monologue; the sauna tour. All are visually stunning, and Newson can call upon the talents of a troupe whose fluency of movement and visual expression has perhaps only Theo Clinkard’s current Bausch Company as its peer, but it is in the subtle and unremarked bulk of Langolf’s movements where the true character of John is developed and projected.

Like all truly great representations, it is easy to miss the brilliance, disregarding deft precision in favour of more immediately obvious vamping. Initial feelings on leaving JOHN run on comparative lines: it seems more subdued than Can We Talk About This?; it lacks the spectacular moments from that earlier work (Langdorf-as-Christopher Hitchens perched upside-down on his head, calmly expounding political theory; the glorious human chair sequence, the searing suspense of the domestic abuse scene).

Does the clinical detachment of the men at the sauna rob JOHN of a male-female sexual tension that is central to our dominant cultural iconography? Does a man baby-cradling another man have the same meaning as if the genders were mixed, or does comedy value rob it of its Pieta/wedding day connotations?

All good questions, and all easily answered by pointing out that, in comparison to Can We Talk About This?, JOHN is an exponentially more subtle and intimate piece. And, given time to digest, a better one.

Next Story:
Who’s Putting the Nanotubes in the Air? And Why?