The Beauty of the In-Between: String of Subsequence

Discovering the intricate beauty of the in-between

Elaborating on ideas around subsequence, Brooke’s room. series was generated as “a platform for showcasing work without becoming bankrupt”; a continuation of a creative practice in London – a harsh environment for young artists and curators.

Given these specific contexts, it would not have been surprising for the exhibition to explore subsequence as direct cause and effect: ‘climbing the ladder’, waiting for the next ‘thing’ to come up, a reflection of the negative sense of limbo that is so prevalent in a hyper-precarious state of capitalism. But what the exhibition actually feels like is an intricate and eloquent fingers-up at this immediacy. 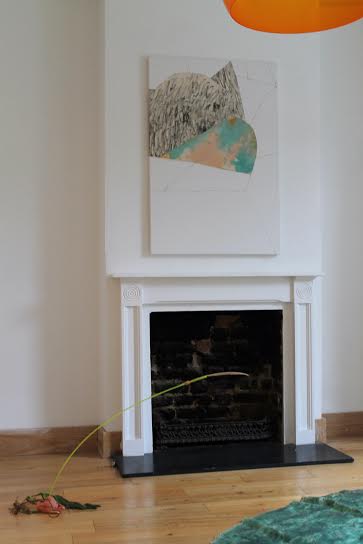 Despite all of the works being stationary the show as a whole is brimming with the potential for kinesis, appearing as a freeze-frame taken from globular, slo-mo movements reminiscent of a lava lamp or a Microsoft aquarium screensaver.

Viewed collectively, the works seem to want to bulge out of the space with a rounded softness that wont quite fit through the gap in Brooke’s slightly-drawn living room curtains. Even the colours, for the most part, appear to be in the middle of mixing; gestural marks make visible the many gentle combinations of varying shades and tones.

The curation, in which each piece seems to want to merge into the next, places the works somewhere between act and subsequence; they are both there and not wholly there – they are in transit, on their way to somewhere else; their subsequent state.

Alexandros Papathanasiou’s sculptural intervention ‘Towards an Architecture’ takes a process of transformation and pauses it, rendering the transition between physical states tangible. A huge helium balloon tugs at a strip of wood pulling one end skyward, the force of the silent gas made visible by its perfect stasis. Here it seems two temporalities merge to reveal the state between existence and subsequence, “between what is and what might be.”

Similarly Henry Day’s ‘Tesseract II’ evokes a notion of an unusual equilibrium. The sculpture pits the sphere and the cube against one another using mirror and glass to impose a wonderfully incongruous fluidity; the opposition between linear and infinite becomes a new reciprocity in their merged reflections. 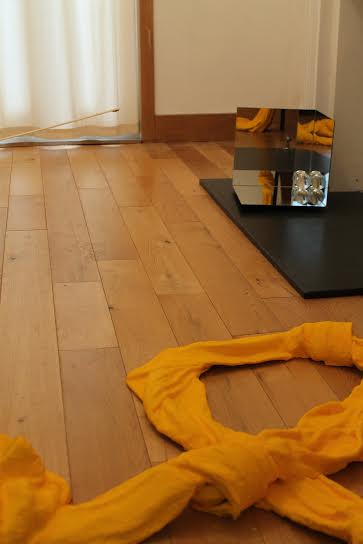 The works are well spaced out and occupy various heights of the room, offering not only a sense of balance but also a sense of movement, a steady pulsating up and downward. On the wall in a corner is Hiroko Nakajima’s ‘pillow, swallow, hollow, yellow’, a cyclical poetic text beginning with a global journey at sea and ending with marmalade for breakfast. It meditates on the grand and the personal and rejects ideas of linear subsequence, instead repeating the suggestion of returning “back to the beginning again.” The lines of temporality, dominance and existence are softly blurred, merged and rearranged.

Whilst each work stands alone, each artist employing excellent conceptual and technical skill, the exhibition as a whole offers much more. It transforms a living room into a lagoon of self-aware, intentional exploration of the organic spaces between cause and effect, between original and subsequent states. The show proposes a replacement for the familiar dread of limbo that is both refreshingly exciting and soothingly reassuring; it finds the intricate beauty of the in-between.

Next Story:
Entombed A.D. and Vovoid at Camden Underworld