T
hey came to California for the light and stayed when it got dark.
It got very dark.

When American film began its industrial centre was based in New York but the town was restrictive, expensive and cold as a dowager’s nipple in the wintertime. Los Angeles, on the other hand, was warm, cheap and welcoming. The movie studios preferred that other hand, the one that gripped tight onto the fiscal opportunities offered by an attractive locale and a film friendly climate.

Greedy studio heads set about creating a disciplined production line to rival those of Henry Ford’s automobile factories. The lure of silent gold in the Hollywood Hills swiftly attracted stubborn pioneers, brilliant minds and selfish bastards with the magnetic force of a Tesla coil.

By the roaring twenties a cinematic lens was steadily streaming increasingly deranged and lusty images out into the hinterlands of dullsville USA and the wider world beyond. It is generally accepted that people love to watch movies but what if the reverse is also true?

As the amount of cinemagoers increased so did the vulgarity level of the celluloid content projected. Beneath the surface of the studio system a cinematic Death Ray was assembling itself by stealthily absorbing base desires and storing them for future transmission.

Shorts, cartoons and out of date newsreels were shown as a package before the feature attractions which borrowed their techniques and stylistic mannerisms from German expressionist cinema. Mack’s mini-masterpieces were kinetic rather than static, and contained a purposeful low heat which the public ate up with a greasy spoon.

Elegant, graceful gestures and glacial camera set-ups soon went the way of dead flesh. Then, as now, whizz-bang freneticism, misanthropic comedy and a dash of sex appeal beat the hell out of art films at the box office.

If you want to examine, in detail, the poetry, poison and nectar unleashed by the death throes of silent film then be sure to check out Kenneth Anger’s brilliant Hollywood Babylon.

You might care to pick up a vintage copy of a Tijuana Bible to go with it.

Back then Tijuana, Mexico was the California Interzone. It was discretely situated just across the border – a grey area where any type of sexual gratification could be purchased for a handful of dollars then safely relegated to the back door of the mind. The bedside drawer in all US hotels contained a copy of Gideon’s bible to illuminate and sanctify the mind before lights out. The TJ version served a different purpose entirely.

I wore that shirt until it fell to pieces.

If Chaplin and WC Fields were the most celebrated of the Sennett alumina then Roscoe Fatty Arbuckle certainly became the most notorious. Under limelight and pancake makeup he shed buckets of sweat for the Sennett cause, while regularly assaulting pretty young actresses in his dressing room between takes. 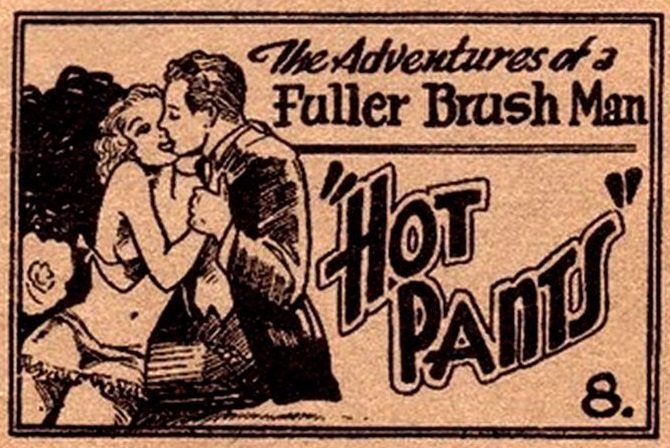 The performer was a talented ‘heavy’ who moved gracefully, threw pies and humorously tumbled. He rose rapidly through the ranks, starting out as a bit part player in the popular Keystone Cops series and soon became a featured star. In 1921 he signed a three year contract with Paramount and threw a wild party to celebrate in the four room suite of a San Francisco hotel. Even though prohibition was in full force alcohol flowed freely.

During the revels a young starlet named Virginia Rapp became ill and died four days later of acute peritonitis caused by a ruptured bladder. Arbuckle was charged with crushing her during a sexual attack. Roscoe got off after two trials but the adverse publicity turned the public against him. His career nosed dived and never recovered.

Unfortunately the incident was considered too raw and unpleasant for the jaunty tone of a TJ Bible and never rendered in cartoon form.

Chaplin the ‘lovable tramp’ was also an expert in relentless debauchery but sly and cautious in his practice. Although he skated effortlessly over a number of potential scandals to become Hollywood’s golden boy his imagined sexual adventures were the subject of a number of TJBs along with Fields, Mae West and her in-the-closet protégé Cary Grant.

So what connects these early stroke books with a one-eyed blond kid named Bazooka Joe?

Read our next thrilling installment to find out.