Frontwoman Isis Queen has the appearance of a prettier, sexier and somewhat healthier Nancy Spungen

Sick of today’s packaged reality TV bands? Wish you had been old enough to spit on the Sex Pistols?  Long for the invention of time travel so that you too could hang out on the Bowery and shout abuse at The Ramones?

Well tough luck, you need to stop dreaming ‘cos it ain’t going to happen.

But while you’re mourning the death of punk, meet Greek-American band, Barb Wire Dolls.
Frontwoman Isis Queen has the appearance of a prettier, sexier and somewhat healthier Nancy Spungen with the punk rock uniform of a customised cropped top scrawled with the words “Sex Pistols” in felt-tip pen neatly punctuated with stylised rips and safety pins. 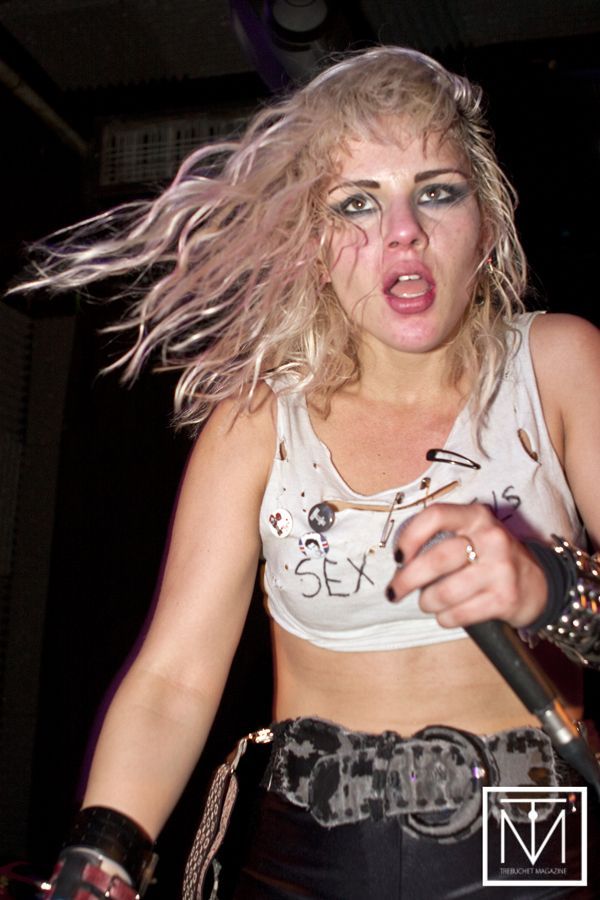 Next to her, in his CBGB t-shirt, skin tight faded black jeans and battered leather jacket tippexed with the Public Image Limited logo stood guitarist, Pyn Doll. Hair shaved at the front and brightly dyed dreadlocked at the back, if it wasn’t for the shiny unsullied newness of his cherry red DMs and unblemished Dead Kennedys patch, he could be drinking white cider on the towpath of the nearby canal.  Behind them sat topless drummer, Krash Doll with his tidily symmetrical chest tattoos and flailing dreads.

Apparently an earlier incarnation of the band, with Isis Queen looking like a cheerleader dressed up for a punk-themed party and the others looking more like a comedy fancy dress Ramones than the current Sex Pistols look, appeared on TV show, Greece Got Talent in 2010 singing about CBGB and being a punk!

If the look was postcard punk, the sound was on the faster, harder side. The lack of a bassist did not detract from the noise. The guitar was driving and furious, at times bordering on thrash metal and with frequent chugging hard rock power chords.

Isis Queen spoke over music between songs urging Londoners to rise up and rebel, but rather than a spontaneous plea, her patter and steely eye contact was as meticulously rehearsed as her perfectly timed writhing on the floor.  During forays into the audience, she grabbed onto the t-shirts of male onlookers and leant onto them like a staggering, dazed boxer in the ring. 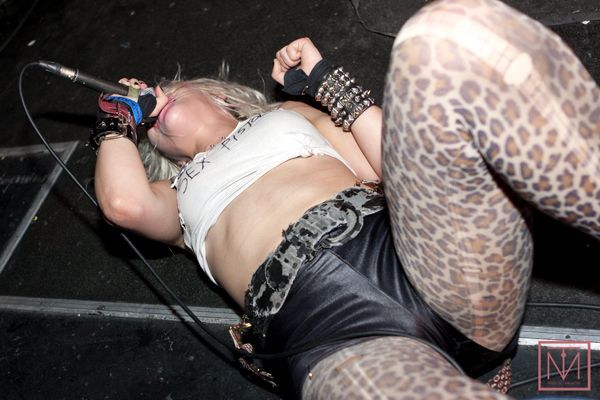 Despite having a growing following in their adopted home of LA and an album produced by the ubercool Steve Albini, their first ever London gig at Camden’s Barfly was half-empty.  Thankfully however, the audience that had bothered to turn out consisted not only of speed addled punk grandfathers, but also of teenagers in baggy t-shirts no doubt sourced from the stalls up the road.

Although there were some attempts at bouncing around by the contingency in front of the stage, there was no real mosh pit to speak of.  The lack of response cannot be blamed on the band however – their performance was powder fuelled non-stop energy throughout.

The vocals had the usual Siouxsie Sioux style female punk inflection, but with hints of Mia Zapata and Courtney Love and even moments of Toni Basil.

Unfortunately as one left the venue with ringing ears, their call to arms, all too timely, failed to ring true. Rather than being sincere and passionate, it was as stage managed as their leopard print and studded accessories and nothing more than a punk-by-numbers spectacle for these nostalgic times.
It was a time travel back to the punk era only in the style of a Madame Tussauds style tourist attraction and as tragic as the weathered Mohicans giving out flyers on the high street.

The atmosphere in the Barfly was heavy not with dry ice, fresh sweat, cigarette smoke and patchouli oil as in the days of old, but with the stench of a contrived, coke snorting, money-making machine, the opposite of all the band profess to stand for.  As Johnny Rotten famously said, “Ever get the feeling you’ve been cheated?”

Barb Wire Dolls played at The Barfly, Camden on June 17th, and will play the 100 Club on Saturday 22nd June.