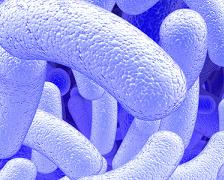 Which is probably why…. Hang on. *Gets lost in mathematical ponderations of just how fast would a germ be going if it were sneezed in the same direction of the plane’s flight….*

Disease-causing bacteria can linger on surfaces commonly found in airplane cabins for days, even up to a week, according to research presented at the annual meeting of the American Society for Microbiology.

“Many air travelers are concerned about the risks of catching a disease from other passengers given the long time spent in crowded air cabins,” says Kiril Vaglenov, of Auburn University who presented the data. “This report describes the results of our first step in investigating this potential problem.”

In order for disease-causing bacteria to be transmitted from a cabin surface to a person, it must survive the environmental conditions in the airplane. In the study Vaglenov and his colleagues tested the ability of two pathogens, methicillin-resistant Staphylococcus aureus (MRSA) and E. coli O157:H7 to survive on surfaces commonly found in airplanes.

“Our data show that both of these bacteria can survive for days on the selected types of surfaces independent of the type of simulated body fluid present, and those pose a risk of transmission via skin contact,” says Vaglenov.

This research is laying the groundwork for important work to come.

“Our future plans include the exploration of effective cleaning and disinfection strategies, as well as testing surfaces that have natural antimicrobial properties to determine whether these surfaces help reduce the persistence of disease-causing bacteria in the passenger aircraft cabin,” says Vaglenov.

They currently have ongoing trials with other human pathogens including the bacteria that cause tuberculosis.

Next Story:
Loitered Lens : The Sonics